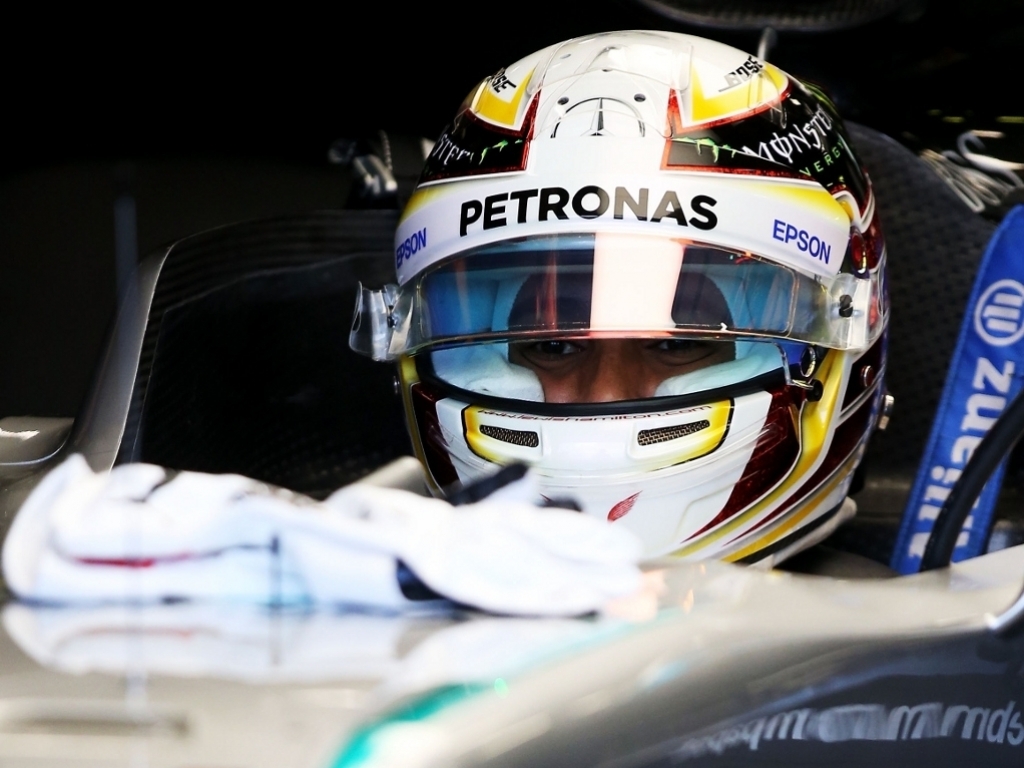 Mercedes:
Lewis Hamilton: “I have to take my hat off to the team. What they’ve done to raise the bar once more, for the third year in a row, really inspires and motivates me. I really enjoyed driving the car in qualifying today. We got the setup just right and they were some sexy laps! They felt so good – flowing nicely with no real mistakes. That’s all you can hope for – to always improve – and that’s what we’ve done, so I’m very happy. There’s still a lot of work left to do tonight and especially tomorrow, though. There’s a lot more studying for us drivers with the changes to the radio rules. We can’t be told if the strategy is changing through the race, so we have to be able to anticipate what’s happening if you end up in a different situation than expected. I’m excited. It’s a new thing and I hope it adds to the spectacle. I highly doubt it… but we shall see.”

Nico Rosberg: “We have to be careful, as it’s very early days. But I have to say it’s very impressive how the team has come out as the quickest here by a good margin for the third year in a row. It’s amazing to see, as the risk when you’re dominating is that you start to become complacent. It’s a big risk too – one that we’ve seen before – but everyone seems to be pushing on through. Of course, I’m not happy with second place today. My last lap in Q3 was good – but Lewis just did a better job, so that’s it. Still, there are a lot of opportunities starting from P2 so I’m looking forward to the race.”

Ferrari:
Sebastian Vettel: “I think I said many times that we have done a step forwards, which I think we have. I think especially tomorrow we should be quite a bit closer. We expected them to be strong in qualifying, which they were. Very happy with the lap I had in the end, so we called it there and saved the set of tyres for tomorrow. We’re not on the front row but we still have high hopes for the race and it’s going to be a long year. We know this car has a lot of potential, so I think as a starting out, third and fourth, locking out the second row, is a good achievement.”

Kimi Raikkonen: “It was not the ideal qualifying, but not too bad either. The car feels pretty good, and even if the Mercedes are faster than us I don’t think we should be too worried. I was struggling a bit with the front tires to get them working at the first three corners, but apart from that we had a very good package and it was getting better and better. Maybe for us it would have been better to have warmer conditions. The new qualifying format is obviously different, from a driver’s point of view it’s a slightly different feeling than it was before, but if you watch it on TV I think that there is a much bigger difference.I think today we did a good job as a team, this being the first time of the year. In Q3 we did have another set of tires available, but it wouldn’t have changed a lot to go out, so we decided to keep it for the race. So far it’s ok, it can always be better but we’ll see what we can do tomorrow.”

Toro Rosso:
Max Verstappen: “We have to be realistic, Mercedes and Ferrari are a little too fast for us at the moment,” Verstappen said after his best qualifying performance in F1. “But it was a great achievement by the whole team – I think you can call us best of the rest at the moment. We knew the car was handling well [in pre-season] but you don’t know what other teams are doing…but I think we made a very good step, not only with the car but with the power unit. And everything worked perfectly today. I was quite on the limit, quite on the edge, but I think not many people made a mistake so I think we deserved to be P5. It should be positive in the race; we have a good chance to maintain position.”

Carlos Sainz: “We can be happy with our first qualifying session of the season – a P5 and a P7 here in Australia is a great result for the team! I’m pleased with my starting position and even though in Q3 I wasn’t able to repeat a strong lap like I did in Q2, a P7 is a good starting point for tomorrow’s race. The car feels really good and the hard work we’ve done over the winter is starting to pay off. It was quite a hectic and tricky session for us, but we hope the fans enjoyed this new format. We’ve got good pace and our objective tomorrow will be to hopefully go forward and score as many points as possible. We need to aim for that top seven, and I’m certainly looking forward to that challenge, it will be a fun race!”

Williams:
Felipe Massa: “It was a good qualifying. I managed to qualify the best I could, but unfortunately lost out on fifth place by a very small gap. That is the only negative point. I did some good laps and the car behaves well, so I am happy. It is tricky, and not easy, going through the session knowing the countdown is on every few minutes. Fortunately, I didn’t have any problems on my laps, but if you go out in traffic and you have any problems, it could be a lot closer that it was today.”

Valtteri Bottas: “It was a disappointing session. I was struggling with grip today, so we need to have a look to see if we got everything out of the tyres, the pressure and temperatures. I was hoping to get to Q3, but tomorrow is a new day and from 11th it is still possible to have a good race.”