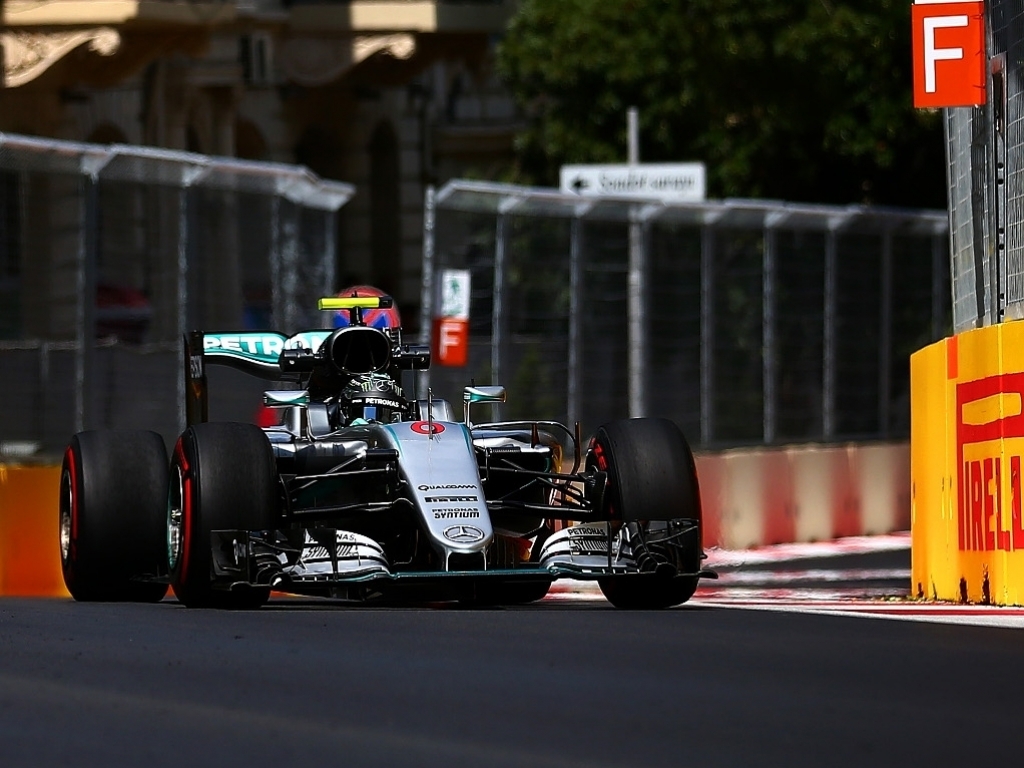 Nico Rosberg grabbed pole position for the European GP, qualifying ahead of Sergio Perez, who has a grid penalty, Daniel Ricciardo and Sebastian Vettel…

Mercedes:
Nico Rosberg: “That was a very exciting qualifying session today. In Q3, Lewis went down the escape road in front of me on his first run, so I had to back down and abort that lap. I therefore only had one quick lap at the end – but I got it all together and felt pretty confident that it was enough to get pole after I heard that Lewis was out. It’s a great feeling to start from P1 as I have the best chance for tomorrow. It’s a very demanding track here and you are not allowed to make a single mistake, so it will be a long race with a lot of things going on. It’s definitely a good track for overtaking and there will be Safety Car moments for sure as we have seen in GP2, so I must be prepared for that. I expect a fast comeback from Lewis even though he’s starting P10, as we have seen recently that he’s finished P2 even coming from the back. It’s going to be an exciting race to watch. I’m looking forward to it.”

Lewis Hamilton: “It’s a fine line between being on it and not being on it – and I just wasn’t on it today. I had a fantastic rhythm yesterday but none whatsoever today. There’s no specific answer or excuse. I wasn’t hitting the right apexes or the right braking zones… it was just one of those sessions. Sometimes it happens. It was my fault, so I’ll apologise to the team and try to make up for it tomorrow. It’s always difficult to come back from this kind of position so it’ll be damage limitation tomorrow. I highly doubt I can challenge for the win – but I’ll give it my best shot and try to bring home as many points as I can. The car is good here and we’ve got more pace than most of the others. I’ve just got to make my way through any tangles at the first corner and see where I go from there.”

Force India:
Sergio Perez: “That was a special qualifying session. In Q3 I did one of my best laps in Formula One – maximising every corner and kissing the walls. As a team it’s been a very strong performance. At the same time I’m still angry with myself because of what happened at the end of final practice and the grid penalty for the gearbox change. I should be starting from the front row of the grid, but I now have to drop back to seventh. Tonight I need to try and clear my mind, put that frustration behind me, and focus on moving forward in the race. I need to say a big ‘thank you’ to my team for the amazing job they did to fix my car in time for qualifying. I hope I can give them a special result to celebrate tomorrow. It’s not going to be an easy race because the track is so challenging and it’s easy to make mistakes, but at the same time this can open up opportunities to make up ground. I still have a good feeling about the race.”

Nico Hulkenberg: “A very disappointing qualifying session for me. The car has been quick this weekend, but starting from P12 means we’ve got a big job on our hands tomorrow. The main problem in Q2 was spinning on my first run because I was on a mega lap that would have easily put me through to Q3. I just lost the rear at turn 16 and spun. Because I had not set a time yet, it meant I was under pressure and it all came down to the final few minutes. Unfortunately I had some traffic on my second run and I just didn’t feel the same grip with the car – and that’s how quickly things can slip away from you. It’s very frustrating and annoying because the car has good potential and we should have been much higher up. So it’s a bitter feeling, to be honest, but I’m determined to make up the lost ground tomorrow.”

Red Bull:
Daniel Ricciardo: “It’s my third front row of the season so that’s really nice, I owe a big thanks to the team for getting me to the start of that queue (in the pit lane), that was a crucial part of it and allowed me to get a clean lap. My first lap in Q3 I went wide and made a few mistakes so we needed that last run and I’m glad I was able to execute a good one. We learnt a lot from yesterday and were able to connect the dots overnight which led to a strong day. The race tomorrow is going to be really interesting, I would be very surprised if it’s a dull and boring race. If anyone hasn’t watched the GP2 race from this morning I suggest they do. Judging by it you need to survive, be smart and pick your opportunities to be fast using the slipstream well. I think it could potentially be race of the season so it’s going to be fun. On average we have been having better starts than Mercedes, so if I get a good start it won’t be too tactical, just aim to get good track position and then figure it out from there. I have been handed second place on the grid by Perez’s penalty so we’ll take what we get and see how we go tomorrow.”

Max Verstappen: “I think today we could have been P3; when the red flag came out I was already five-tenths up on my lap from Q2 so a 1:43.9 was in sight, easily. It’s just unfortunate I got ruined by Bottas in Q2, and then after the red flag in Q3 with two minutes to go, he did exactly the same thing, so again, very unfortunate, but the pace is there. I don’t need to have a chat (with Bottas), I’ll just focus on tomorrow. We know from GP2 there will be a lot of action and overtaking, so it will be a very interesting race for sure. It will be interesting to have Lewis behind me, he’ll be very quick. There are a lot of opportunities on this track – there are a lot of straights, but even in the turns you can overtake, so I’m very happy with the performance we showed today. It was all coming together and we have a good shot tomorrow. You have to find a compromise with setup, our rear wing is small so we lose a bit of down force where we are usually very strong but still we are up there, so I think the car is performing well.”

Ferrari:
Sebastian Vettel: “Yesterday we weren't very strong. However, we came back today, although not yet where we want to be. We also benefitted from the penalty of Perez. Now we have to focus on a good start. I think tomorrow anything can happen for anyone. It will be a long race with a lot of laps. If I started fourth tomorrow I would be more angry. So, I think it is fine this way and that we started on the clean side. I think it's likely to make quite a big difference on a new track. Maybe I am wrong, but usually we have good starts. I've had a good feeling already this weekend, so we'll see. It's going to be a long race. We have to stay focused all through the race, it will be tough. I think it is possible to overtake, there is a very long straight. We will see tomorrow how much easy or difficult it will be, but in general I think it is possible. I am always nervous before any race, which is good because it means that I care. It has been a very tough weekend trying to find the rhythm. I believe it is easy to make mistakes. This track is surprisingly bumpy and it is not easy to find the right time and to manage hard brakings and high speed. We are happy but not entirely because the gap with Mercedes is very big, but it will be a long race with plenty of opportunities, I guess. After the weekend we will try to understand where we were losing time, but for the moment let's focus on the race, because we have all the chances to do a good job.”

Kimi Raikkonen: “It hasn't been an easy weekend, but today in qualifying we managed to make the car nicely balanced, the feeling was good and obviously it was a lot faster than earlier this weekend. I felt I could drive it as I wanted and it was a good feeling. In my last run in Q3 I had fitted a new set of supersoft tyres, but then the red flag came out and I was not able to improve my lap time. After that, with only two minutes in the session, everybody tried to rush out and do a last lap, but there was traffic in the out lap and the timing was very tight. I'm sure that if we could have run smoothly it could have been better, but if you look at how tricky the weekend was so far, we can happily take this result. Obviously we are not here to finish fifth and today I felt there was more to come from the car. In many ways it will be a long and tricky race for everybody, we just need to do our best, make the right choices and see what will happen.”