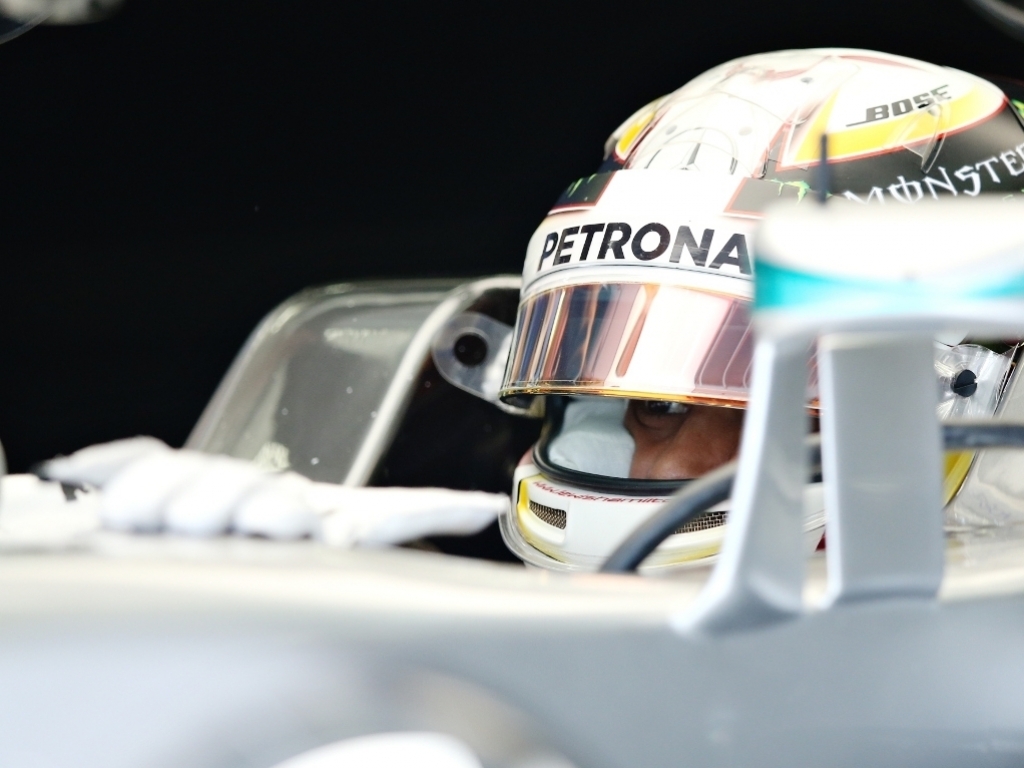 Mercedes:
Lewis Hamilton: “I’m really happy with that – the last lap was so much fun! Throughout practice and most of qualifying my laps weren’t quite perfect and Nico would be ahead by a tenth here and a tenth there – whatever it might be. So, to finally put it all together when it counted was really satisfying – and quite a relief! There was big pressure too, as I went off on the previous lap and knew I had to make a big improvement. A massive thank you to everyone here at the track and also back at the factories in Brackley and Brixworth for this car. It’s really very special. It will be important to get a good start tomorrow, like always, especially as there’s a longer run down to turn one here than in Melbourne. It’s something we’ve been working on – but we’ve only had a couple of weeks since the last race, so I don’t expect big improvements. Hopefully it’s better than last time – we’ll see.”

Nico Rosberg: “My lap felt good and I was sure that I had got pole when I crossed the line – but then the guys told me that Lewis was just a bit quicker. He did an incredible lap at the end, so a good job from him. The good news for me is that this is one of the tracks where pole position counts for the least. Strategy tomorrow will be important and maybe even quite messy, so there are still a lot of opportunities. You have a few more places to overtake here than at other tracks too, so I’m quite confident for tomorrow. Tyres are going to be a big issue. We have softer tyres here than last year and it will be interesting to see how long they last and when they will start graining. It should be an entertaining race, so I’m looking forward to it.”

Ferrari:
Sebastian Vettel: “I am happy to take the fight. Let’s see where we are during the race. Today there’s nothing really to complain about. It’s a big surprise that both Lewis and Nico in the end were able to improve so much. For me the track was similar to the run before and that’s why the time was practically the same. Tomorrow we hope to have a good start, but not doing the same as in Australia thereafter… We know we are not yet where we want to be but I think we are pushing very hard though. Obviously the season has started already so it’s up to us to make sure we keep making technical progress, but as I said many times the car is a big improvement to last year and this will provide more opportunities to improve also in the future; but we really have to keep up the pressure. You can talk about what can happen in ten races but we have to focus first of all on tomorrow, prepare the race as good as we can because there’s a chance to do well and to win. That’s my belief. If I am right or not we’ll see, but that’s the joy, I think, and what I love about racing. To put it in simple terms, I would love to win tomorrow. Naturally if we had more speed we’d also have a better chance to win. But I think we are on the right track, we are a team and we try to improve together. Today was a good day for us, all the car balance was good and we got everything we wanted by ourselves, which is the most important thing.”

Kimi Raikkonen: The session went straightforward, everything worked pretty ok, but obviously it would have been better to gain some positions. With the last set of Supersoft tires I had some difficulties in the first few corners, so I was not able to improve my laptime, but apart from that it seemed to be ok. Still, this is not the result we aim to, we want to be in the front. We definitely have some more work to do because we are more or less close to where we want to be. Tomorrow we’ll try to improve from where we finished today, we’ll do our best and see what the day brings. Let’s try to make it a good race.”

Red Bull:
Daniel Ricciardo: “I’m really happy with the result today. We didn’t expect to be fifth, especially from my side of the garage as yesterday didn’t go too well and this morning wasn’t great either. We came into qualifying thinking if all went well, maybe we would squeeze into Q3, and so to get into fifth is great. I am happy with the laps we did, the changes we made from FP3 worked well for us in quali and I am excited for what the race will bring tomorrow.”

Daniil Kvyat: “Today didn’t go as planned. Our timing during the session was not bad but we just didn’t have any pace. From our side of the garage there was something missing when we got to qualifying, I don’t know at the moment exactly what it is but it’s not where I want to be. FP1 was fine and we showed good pace, FP2 and 3 weren’t too bad either but when it came to qualifying we were pretty much nowhere. I don’t know what it was but we will look into it and try to turn things around for the race tomorrow.”

Williams:
Valtteri Bottas: “It was a good qualifying session and we managed to get the maximum out of the car we had. In Felipe’s car we’ve also made progress with the new front wing today, which is good. We start the race in a strong position and the target will be to finish in the top five which I think is definitely possible. We just have to find a way to get past the Red Bull and the fact that we have better straight-line speed compared to them should help us. I’m hoping for a nice clean race and to collect some good points tomorrow for both cars.”

Felipe Massa: “It was definitely a good qualifying. We always expected to be a little bit more in front. It was a difficult day trying the new wing in practice and then not really having the balance, so we took our time to decide whether or not we would use it in qualifying. We decided to use it and managed to improve our time which was important. We need more time though to understand this front wing to get the most from it. I’m pretty upbeat about our position for qualifying, though. We know the race will be long tomorrow. We have one Red Bull in front and also one behind. Both Toro Rossos are behind, as are the other teams we are fighting, so we know the race will be difficult. We will try the best we can to score as many points as possible. “