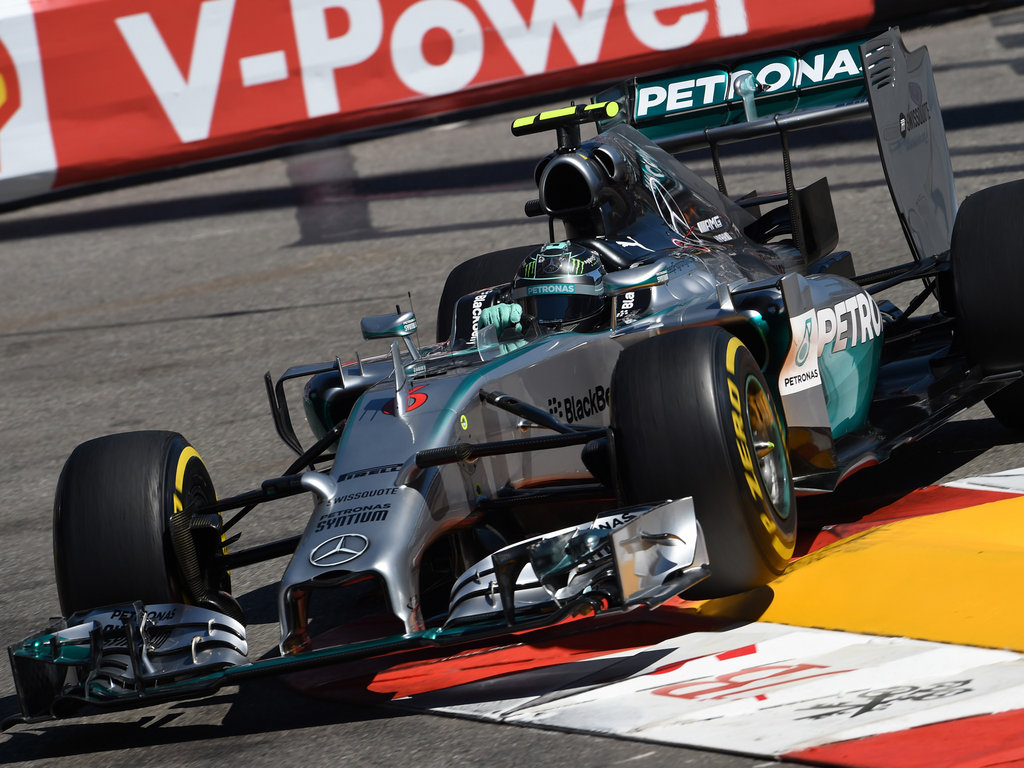 Mercedes:
Nico Rosberg: “I’ve felt really good in the car for the whole weekend and to get pole again here in Monaco is fantastic. The team has done a great job again this weekend because our performance is so strong even on this unique circuit – which shows that we have developed a really strong chassis and engine package for this season. I did a really great banker lap at the beginning in Q3 but Lewis was very close, so I gave it another try and pushed a bit more, unfortunately just a bit too much over the limit. I locked up the rears and then the fronts offline at the bumpy downhill part of the track before turn five but I just managed to get down the escape road. I have apologised to Lewis for having hindered the opportunity for him to improve his lap time. Now I will look ahead and forward to the race. I need to have a good start and I hope for a strong race with a good strategy.”

Lewis Hamilton: “I’d had a good weekend so far and I’ve just been concentrating on my own performance and working on the pace one step at a time. Qualifying was going well today but in hindsight, I should have nailed my best lap before the end of Q3. This is Monaco and there is always the risk of yellow flags here. Of course, I’m extremely disappointed that I didn’t get to finish my lap as I was a couple of tenths up. That’s motorsport. I have to get the best possible start and then see what we can do from there.”

Red Bull:
Daniel Ricciardo: “I think I could have been closer to the front today and I don’t like it when that’s the case. I made a mistake in the last run in Q3; we were up and I thought it was going well, but then I made a mistake and lost the time I had made. Anyways, there’s no room for excuses here so I’ll just have to learn for next time. I would be disappointed not to finish on the podium tomorrow. I think we have the pace to hang with Mercedes, so hopefully we can at least get one of them off the line and maybe do something with strategy and give ourselves a real chance of taking a win.”

Sebastian Vettel: “I had some problems in qualifying today. Somewhere in Q1 we lost ERS, so basically the electric power to discharge the car and we didn’t get it back. In the end we ran a different mode which was fine, but surely not as good as it should be. It was the first time it had failed this weekend, but these things happen. We tried lots of different modes, but at some point you have to just get your head down and get on with it. My time was okay but then we weren’t able to improve on the second flying lap in Q3 as there was a yellow flag. I thought we would give Mercedes a hard time today, but we struggled with some things and the gap was too big – it’s still good to be on the second row for tomorrow.”

Ferrari:
Fernando Alonso: “Today’s result encapsulates the state of play this weekend and it’s more or less what we expected, but I don’t think it went badly, because we managed to stay ahead of rivals who have been front runners so far, such as Williams and Force India and, most importantly, we are closer to the Red Bulls. We have made more changes than usual here, because we were suffering with understeer and we had some problems under braking and the car has improved a lot. Compared to what we expected, the tyres seem too hard and we are struggling a lot to get them up to temperature. If the race is run in the dry tomorrow, then it will be an endurance race to see who can stay out on track the longest. However, if it was to rain, as has been suggested, then just getting to the finish will already be a good result, because as we saw on Thursday from the few laps we did, it’s really on the limit, like sliding around on ice.”

Kimi Raikkonen: “I’m not happy with this qualifying, because even though we worked hard on the set-up, making several changes, my feeling with the car didn’t improve much. Right from Thursday I had to fight to find the best solution and the time lost during the second free practice session certainly didn’t help. On top of that, we are not able to make the tyres work well here and in that situation, it’s not easy to put together a good lap, especially on a track where you don’t get a second chance. Sixth place is not ideal, but neither is it a disaster and tomorrow we will do our best to get the most out of it all.”

Toro Rosso:
Jean-Eric Vergne: “I’m very happy with today’s Qualifying, certainly for myself but also for the guys, who have deserved some good results for all their hard work. To have both cars in the top ten is a great achievement for everybody. My last lap on the Super Softs was effected by the yellow flags but the first one was enough to secure P7, which is quite a good position to start the race tomorrow. If we can put everything together, I’m confident we can finish in the points with both cars. I will definitely push to at least maintain my seventh position until the chequered flag.”

Daniil Kvyat: “This was definitely the messiest Qualifying session of my career. In Q1 I lost the rear all of a sudden and touched the wall, so I had to come back to the pits for a nose change. I regained confidence straight away though and managed to do two good laps in Q2, which I’m very happy about. Unfortunately Q3 was a bit unlucky, because I was not able to go for a proper lap then, having started off on used Options. When I went out for the final run on new Options, I had to back off because of the yellow flag. Obviously this is frustrating because it is a track where you cannot overtake easily, but this is the way it is. We will now focus on preparing for tomorrow’s race, where we aim to finish in the points.”