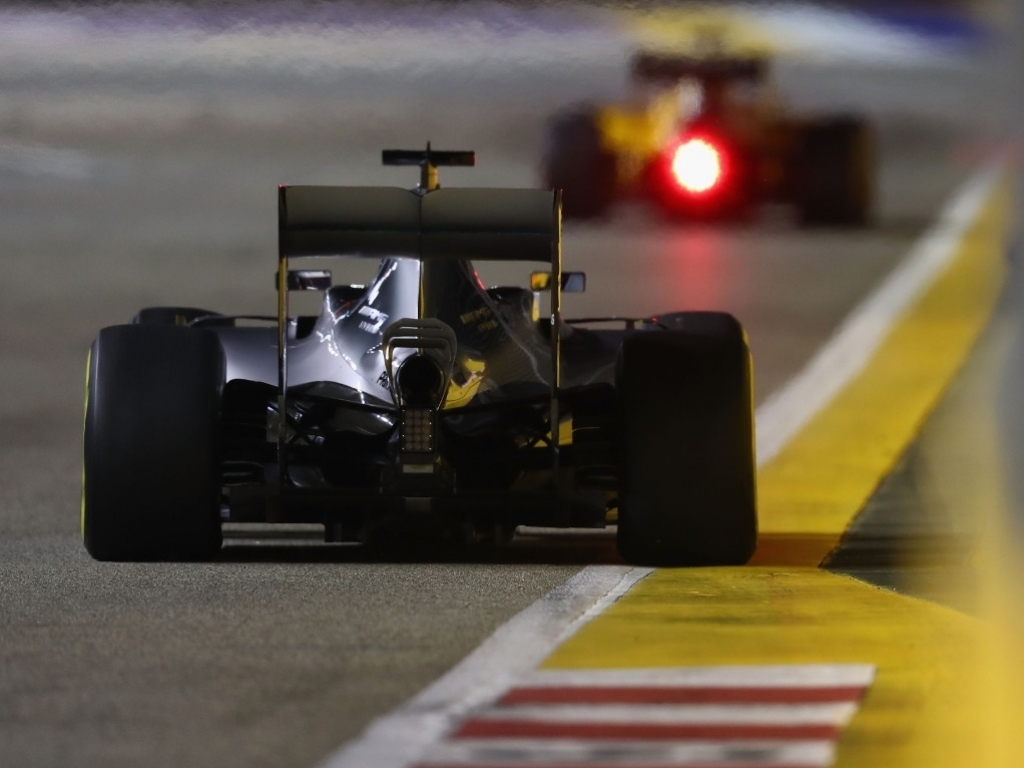 Nico Rosberg qualified on pole ahead of the Singapore Grand Prix, while Daniel Ricciardo split the two Mercedes cars to claim P2.

Merc:
Nico Rosberg: “That was a fantastic Qualifying for me – especially on my 200th GP weekend. I think this lap is in my top three of all time. I felt totally at one with the car, which is really rare. I was able to push a lot and couldn’t even top that first lap time on my second run. In the past we’ve seen that in Singapore pole is important, so I’m in the best possible position for tomorrow. We know that there a lot of pressure will come from Daniel in the Red Bull, as he will start on the SuperSoft tyres. This will be a tough battle but I’m quite confident that we chose the right strategy. We can be really proud of how much quality we have in the team. We learned a lot from last year when we were nowhere in qualifying. We’ve closed that gap and that is very satisfying.”

Lewis Hamilton: “It’s not been my weekend so far. I’ve not got many good laps out there. Not for any particular reason. I just haven’t been able to string it together. People have pointed out turn seven as the problem. But it isn’t any more difficult than any other corner on the track. It’s one of the heaviest on brakes and quite bumpy but that’s it. I had an issue with the suspension not working properly in practice which affected my braking – but we fixed that and in qualifying braking wasn’t a problem. Nico did a great job and showed the potential of the car today. I’ve not really looked at the long runs and I didn’t get to do any yesterday. Nico did and, although our setups are slightly different, I don’t think I’ll be in a bad position. I’ll find out tomorrow. I’ve kind of been on the back foot for most of the year, so it’s nothing new to be in this situation. I’ll do what I can from here. It’s tough to overtake here but I think we’ve made the right call on strategy. Red Bull will go longer on the SuperSofts at the start – but Nico will probably control the race from the front and make it hard to get by. Time will tell tomorrow.”

Red Bull:
Daniel Ricciardo: “I’m pleased with the front row. We set ourselves up well and the lap was clean, but obviously Nico created a big gap and I would have loved for him to not be that far ahead. Even with a perfect lap I don’t think we could have caught that up. So I did what I had to do and the last sector was good. I kept the tyres in good condition and that was important. That was a bit of a weakness earlier in the weekend so I was happy to get on top of that. The supersoft is what we’re going to start the race on and we seem to be the only team in the top ten doing that so hopefully it works for us. We did that in Monaco but then we didn’t get to see if it worked because of the rain on Sunday. If we can get the start we want I think we can control the situation tomorrow, but it’s not a predictable race. There are normally incidents and safety cars so it won’t be straightforward, but I feel good and ready to go. I’m excited.”

Max Verstappen: “Qualifying wasn’t fantastic and I am disappointed with my starting position. The car felt good throughout the weekend during the practice sessions and I was very comfortable in the car but it didn’t come together for qualifying. I was struggling throughout the whole session to warm up the front tyres and the balance wasn’t quite right, there was a lot of front wheel locking so the lap just didn’t come together, which is a shame. We have good race pace and we also have a different strategy to Mercedes as we start on the supersofts, so we’ll see how it’s going to work out during the race, hopefully we can improve on P4.”

Ferrari:
Kimi Raikkonen: “Today we got more or less what we could from our car. Obviously it’s a bit disappointing given where we finished, but this is a tricky place. The fifth position is not ideal, but I was pretty pleased with my first lap in Q3 and the car was handling well. In the last run I knew I had to push a bit over the limit, trying to improve, but it didn’t pay out. I made some mistakes, I went wide in turn 1 and got sideways. There’s no issue with the car, we are just lacking overall grip and in Singapore that makes a big difference. Tomorrow we have to make a good start and then go from there, there will be different ways of using the tires between the teams. The race is going to be very long, and usually there’s a lot happening, so we have to get the timings right and try to go forward.”

Sebastian Vettel: “Already in the first lap, going into turn one, something happened. Then in turn two, through turn five, I felt that the car was not the same. So far we don’t really know what happened, initially I thought it was at the front, but then it felt like the rear bar had broken. I hadn’t felt anything wrong in P3. Then I wanted to come into the box, but in the end we decided to stay out, and then we came in because it was hopeless anyway, we were just not quick enough, and there was no time within three or four minutes to fix the problem. For tomorrow we have a long race in front of us, with a lot of safety cars. At least we have some new tires, and even if for sure it is not an ideal situation. we can still have a good race.”