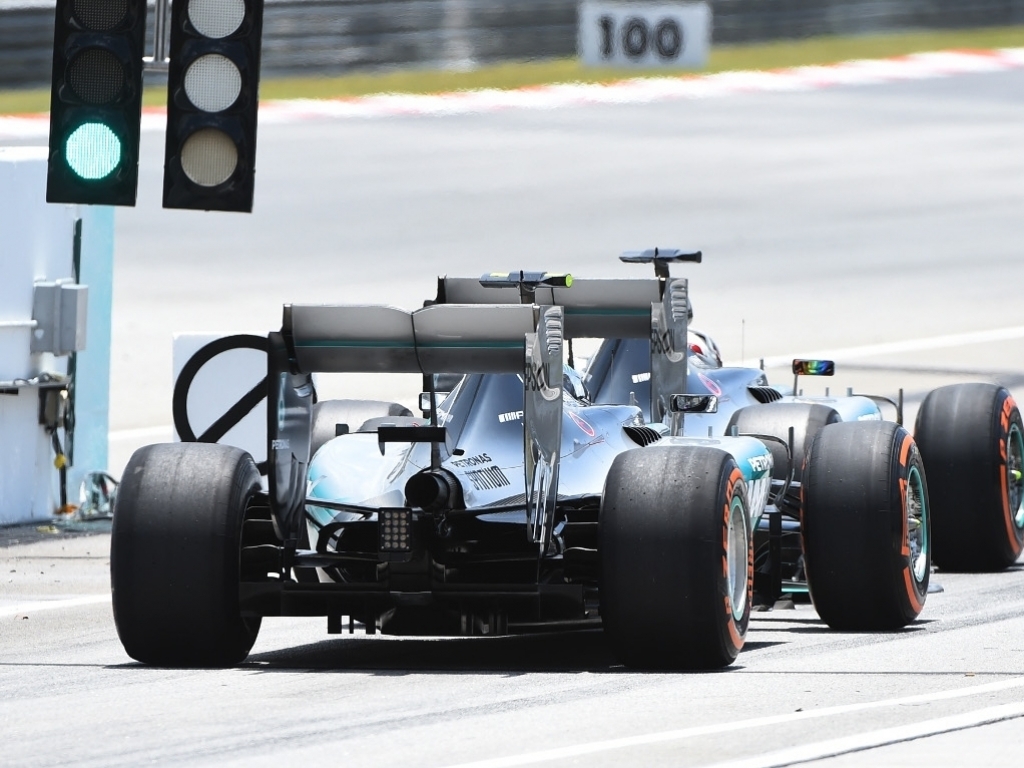 Mercedes:
Lewis Hamilton: "I’m very happy with the pole lap. I didn’t quite put the second lap together so I was hoping the first one would be good enough and luckily it was! I love these kind of conditions – it makes it more of a lottery. I nearly didn’t make it through Q2 when I got caught up with the Ferrari and the Sauber. It’s so easy to get caught out and that makes it even more exciting. I’m looking forward to tomorrow. The car feels great and the heat always makes this race into a challenge with the strategy. The temperatures make it hard on the tyres and last year we made three stops, so it’s tough on the cars as well as the drivers. We’ll also be starting earlier in the day compared to qualifying today so, providing it stays dry, it will be a very hot race. It’s not the easiest place to overtake so the start will be crucial – especially with the long run down to Turn One. Ferrari have made some big improvements and it’s great to be lining up alongside a four time World Champion, so it should be an interesting race"

Nico Rosberg: "Two other guys just did a better job, so it was a bit annoying for me today. Lewis did well and especially Sebastian, who was surprising in the Ferrari, so hats off for him. But I think I have a good chance tomorrow at the start as I will be on the clean side of the grid. I will try to attack Seb off the line and then there are some good opportunities also to catch Lewis. This race will be very demanding on the tyres so we will maybe see three pit stops and there is always a chance of taking a different strategy. So I very much look forward to the race. I will push hard."

Ferrari:
Sebastian Vettel: "I think we had a good pace in the end, it was very tight with Lewis. If you look back to one year ago, we had the same conditions, intermediates in the end and it was one tenth, so maybe next year … For sure the result puts us in a good position for tomorrow. I think the target for Sunday is to extract the best race we can, and then we go from there. The nature of the track suits our car well, I expect nothing else than to be very strong tomorrow, but you never know about the conditions in Sepang. There is rain in the air that can hit you at the right time, but also make go all wrong, you just never know. Let’s keep our feet on the ground, in the end we have to look after ourselves. Mercedes is very strong and has an advantage, but it would be nice to give them a hard time tomorrow, it has been a bit too chilled for them in the last months."

Kimi Raikkonen: "Today it was simply a bad time to go out, we should have been out earlier. I did try to pass Ericsson but he was there trying to do his job; it’s not an unlucky situation but it was a mistake. Tomorrow we’ll try to climb some positions, for sure we have the speed but we are quite far from the front and when you start in this position is not going to be an easy race. Obviously there is going to be more risk in the first corner, but we’ll try to make the best out of it tomorrow."

Red Bull:
Daniel Ricciardo: "We’ve always gone pretty well in the wet and there are still some things we can improve, but fourth is a good result for the team. The second row is a good starting position and we should hopefully have some battles tomorrow. We’re behind Mercedes and Ferrari, but we are ahead of the Williams and the conditions were tricky, so that’s good, step by step we are improving and heading in the right direction. Tyre degradation will be high, so it will probably be a three-stop race tomorrow. If we can finish in the top four, that will be good."

Daniil Kvyat: "It was a decent qualifying for us, P4 and P5 is good for the team but I think on our lap we maybe went out a little early, it might have been better later on but it’s hard always to know with the conditions. Overall, there are a lot of positives to take from this weekend and we are seeing some improvements, it’s a good start."