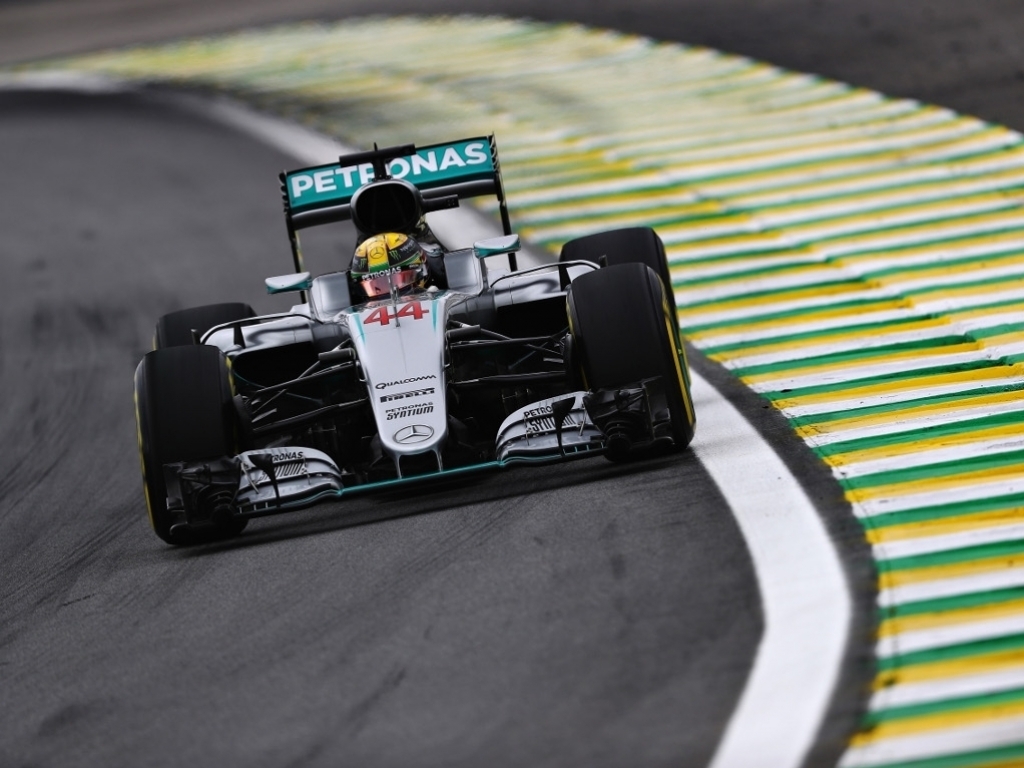 In an exciting finish to Q3, Lewis Hamilton managed to edge out his team-mate Nico Rosberg for pole position ahead of the Brazilian Grand Prix.

Mercedes:
Lewis Hamilton: “It’s been feeling great all weekend. Every session today I was up front and able to maintain that position, finding a little bit more each time I went out. So, I’m really, really happy with it. I don’t know how obvious it is watching at home but, with this being one of the shortest circuits on the calendar, it’s somewhere that even the smallest margin can make a huge difference and it’s usually close out there. It’s a really tricky track to get right. For example, all weekend my first sector times were quite good but then I never really got it together through there in qualifying. When you have such a short lap, getting your tyres ready for the first flying lap is often difficult, so you can go into the first three corners without them being fully up to temperature yet. It’s quite bumpy in places and the middle sector puts a lot of heat through the tyres, so overall it’s definitely a tough circuit. It’s all about having a good balance of patience and not being too greedy in some places. I’ve felt strong in every aspect and in all conditions throughout this weekend, so I’ll prepare the best way I can for tomorrow and see how it goes from there. I’m ready.”

Nico Rosberg: “That was a pretty intense qualifying out there today. I was able to improve my times from lap to lap which felt good and it was all going very well. I found a good balance, a good rhythm… a good everything, really. Then, on my last run I was able to improve again – but at the end Lewis was just that little bit quicker. But that’s the way it is and there is still a lot to play for tomorrow. To win the race is definitely still possible from this position. The start is always a possibility and also with strategy it could be interesting tomorrow. I also had a good long run this morning, so I am looking forward to a great race in front of this fantastic crowd.”

Ferrari:
Kimi Raikkonen: “Today everything felt a bit more normal than yesterday and I was happier with the car. Overall it was easier for everybody, the cooler temperatures helped, yesterday the track was very hot. To be honest the feeling in the last lap was not so good, the front was sliding in the first two corners and I struggled a bit in the middle sector to put the lap together. I knew that it was better than the previous one but I thought it wouldn’t be enough because it was not an ideal one; It was good enough to be third and I’m positively surprised. Mercedes was too far but today it worked out pretty well and we can be happy with this result. There is potential in the car, we are getting where we should be. Tomorrow we can only do our best, with weather conditions you never know and things can quickly change.”

Sebastian Vettel: “Today my last run in Q3 was not ideal: I think third position was possible, but I was probably a bit conservative around the last corner. All in all, though, I think it was a good session: the car was behaving well, but maybe in the end I could have pulled out a little bit more out of it. Yesterday on a single lap we were not particularly strong, we struggled a bit, but I think that in the long run we were quite good: so for tomorrow, if it’s dry, we should be in reasonable shape. Mercedes looked very fast also yesterday in the long runs, so obviously we’ll try to stay with them but our main rival I guess will be Red Bull, which had similar pace to us today. In the race I think we’re usually a little bit faster, so hopefully we can get the job done tomorrow. If it rains it will be the first time for everyone this weekend: but it is what it is, I think we have enough rain tyres…”

Red Bull:
Max Verstappen: “I was just a little disappointed with my last lap, I was expecting someone to jump ahead of me so Kimi being in front wasn’t a big surprise. It was an odd session, Q1 and Q2 felt good but then I wasn’t very happy with the grip of the new set of tyres I got. We need to look into this as the rear felt slick in sector 2, we will analyse and hopefully figure out why. We have ended up very close to third position which realistically is the best we can do in dry conditions so todays result is still pretty good. We have split the Ferraris which means we will have a fun race on our hands tomorrow, especially if the weather changes. It was a bit of a shame the rain stayed away for qualifying. We had a few drops but not enough to make conditions swing in our favour, it is supposed to rain more tomorrow so let’s look forward to that. With some wet track condition our level of grip compared to other cars should come up a bit. Long run pace looks good so after a strong start we can put on a good race. I will go out there tomorrow to perform the best I can and deliver the highest finish position possible for the team. I haven’t paid much attention to the stories of Mercedes talking with Red Bull, Nikki was in our hospitality but he just likes our food and drinks, they are very good. He is Austrian so perhaps just wanted an Austrian drink.”

Daniel Ricciardo: “I feel so-so about 6th place today. I felt we made progress from Q1-Q2 and then in Q3 I was little bit disappointed with my lap. Probably didn’t get the balance right in myself. It’s a tough track and it’s quite a short lap so if you make a mistake in one corner it’s very hard to make up that time. I had a good first sector but was probably a little bit conservative, a couple of corners where I was trying to not make a mistake more than trying to gain some time. We knew qualy would be tight with Ferrari in dry conditions, and it is close and I think that’s what makes it a little frustrating, but I’ll learn from that and hopefully tomorrow we can have a good race. It’s fun when it’s that close but not fun when you are the last of the bunch. The forecast has said all week that Sunday had the highest chance of rain, hopefully that’s true, just to spice things up a bit, and if so then we’ll try and make it exciting for everyone else and give the fans an opportunity to see a good race. If it rains tomorrow it’s going to be a lot of fun.”