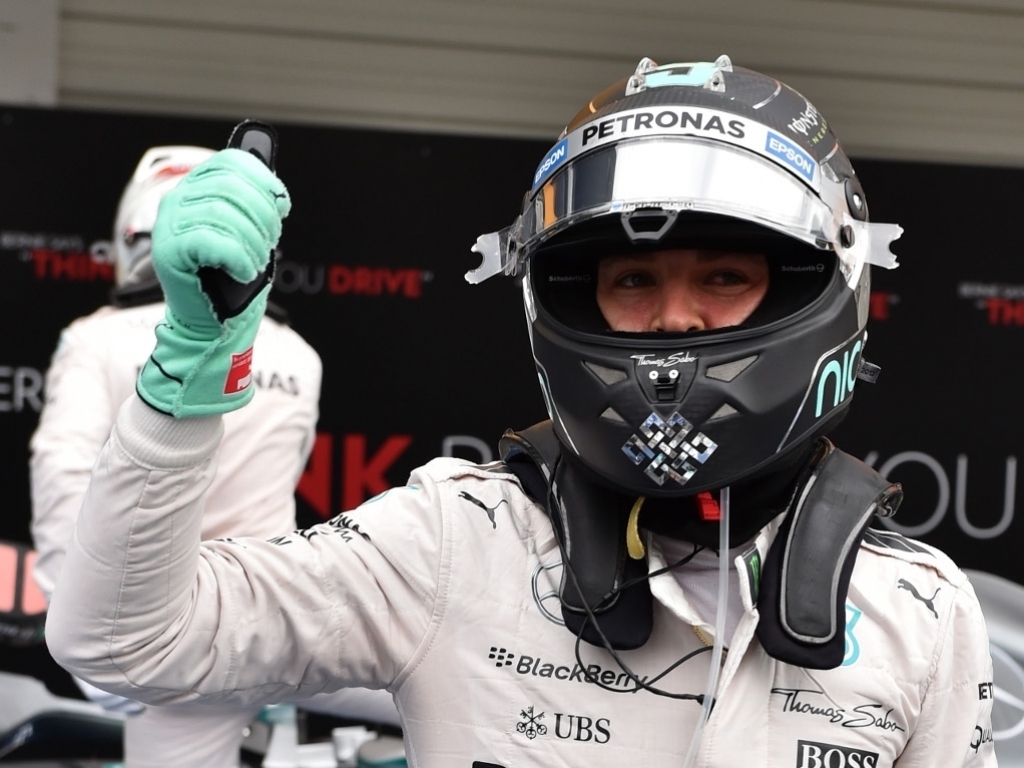 Nico Rosberg claims his fifth pole position in a row as he once again edges team-mate Lewis Hamilton in Brazil.

Mercedes
Nico Rosberg: “I didn’t have a good start in to Qualifying. Q1 and Q2 didn’t go to plan. But then I found a better rhythm in the final session, so I was happy to bring it all together in Q3. It feels great to be on pole again here. It’s the best possible position to start the race, I have the quickest car and on Friday we were able to practise a lot for the race, so I’m quite confident for tomorrow. It will be a good battle with Lewis and also the Ferraris, so I can’t wait for that. But what happened yesterday in Paris makes everything else relative. What we do here is really not important compared to that and I’m thinking of them today.”

Lewis Hamilton: “I might still be working on my 50th pole position – but it’s been looking closer this weekend for sure. Considering how this week has gone, I’m pretty happy with that. Q1 and Q2 were really good and I was trying to better them in Q3 – but it was such a fine line that it was really difficult to pull something out. I did go quicker on the last lap but I was already down a tenth and a half out of turn three, so that was the difference. It’s frustrating when you know you could have done better – but ultimately it’s just that one shot you have to make it count. What it does mean, with the gap so small, is that we will have an exciting race tomorrow. To win in front of the Brazilian fans would be something unique and special for me. While we’ve been focused on qualifying today, I’ve also been praying for all those affected in Paris. My thoughts are with them.”

Ferrari
Sebastian Vettel: “I would have loved to be a lot closer to Mercedes, but that was our maximum today. In Q2 it looked like we could reduce the gap a bit, particularly to Lewis. I saw that Nico’s lap wasn’t clean so I expected him to pick it up in Q3. But then both of them did improve, and that was a bit too much for us, we couldn’t follow. Let’s see tomorrow, usually in the race we are a bit closer. In order to get in front of the Mercedes we need a rocket start, it is not a very long way down to turn one, and a good start always helps. Then in the race trim we are usually a bit better than in qualifying, close enough to put some pressure on them, then I think we can play around with strategy. Interlagos is a crazy place, lot of things can happen, you never know what a GP can bring. It was supposed to rain when we arrived, but then we had sunshine all day, there was rain as well but at different times. Our target for tomorrow is to give everything and it is our aim to create a miracle. The chance is there and we believe in it.”

Kimi Raikkonen: “I don’t think it’s ever going to be easy but you know, today it was not too bad. I went sideways in the last lap in turn 11 and this also affected the run into the last corner. So the end of my lap was not ideal and I lost time, but apart from that the car has been working well, so let’s see what we can do tomorrow, trying to make a good start and moving on from there. The balance of the car was ok, it has been behaving pretty well, although obviously not fast enough for beating the Mercedes. For sure we could have been a bit higher up the time chart, but I think it was not too bad. I’ll start from fourth anyway tomorrow and maybe the weather will be different from today. I heard about Paris this morning, it’s very sad. Unfortunately, in the world these odd things seem to happen.”

Williams
Valtteri Bottas: “It was a good qualifying session. I felt more and more comfortable with the car as the grip of the track increased. It’s always a good feeling when you have got the maximum out of the car. It was good to have one quicker car behind, which is always nice. With the penalty I’m starting seventh but we can do a lot of good things from there, it’s a long race and we have good race pace.”

Felipe Massa: “The struggles I had yesterday are still there. We have made changes but I am still losing time in sector two. Normally I don’t have any issues on this track but for some reason it’s not working for me. We will have to look and see where we can gain some time with the limited options available now. The fans will give me such a boost tomorrow so I hope it can be the deciding factor and things will be in my favour.”