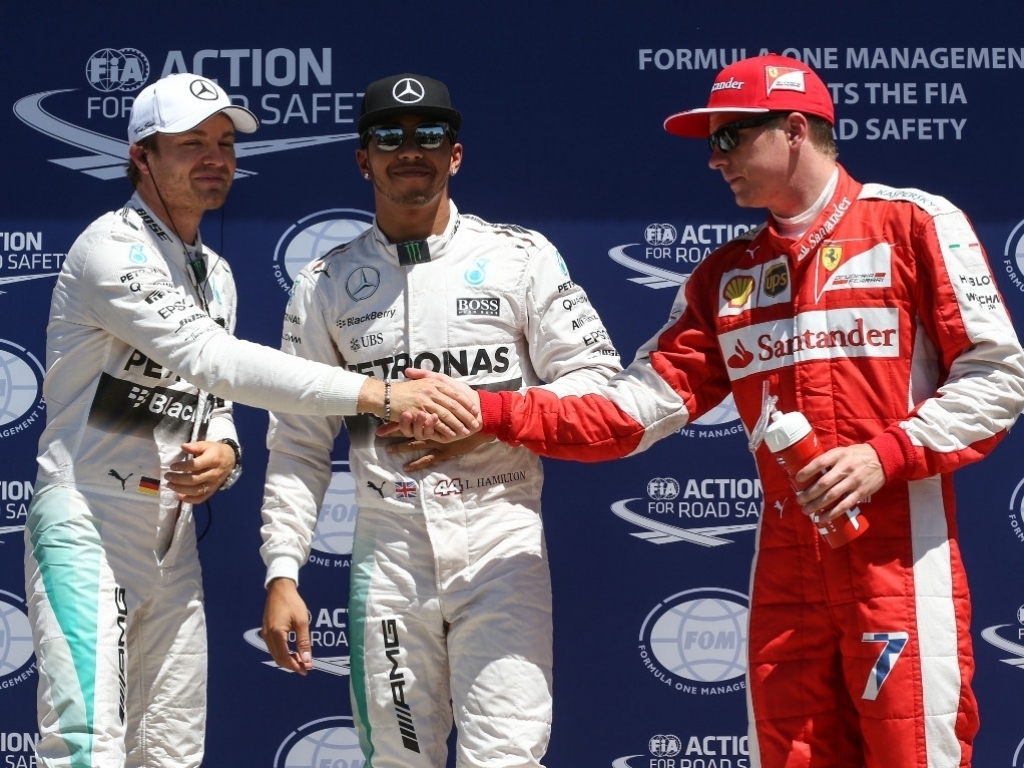 Lewis Hamilton claims pole number 44 while Kimi Raikkonen flew the flag for Ferrari and Valtteri Bottas did likewise for Williams.

Mercedes
Lewis Hamilton: "It’s an amazing feeling. This is where I got my first pole and my first win so it’s very special. It wasn’t the easiest start to the day. I didn’t get much running this morning, partly down to me and also the flags, so we went into qualifying a little less prepared than we’d like. But the car felt great this afternoon and the team did an amazing job – especially after yesterday. Ferrari look like they’ve got good race pace and they’re improving all the time, so we have to keep pushing. But hopefully we’ll have the edge tomorrow."

Nico Rosberg: "I had a good start to the Qualifying sessions and found a nice rhythm between the walls. But then I had a really bad Q3 and I still don’t know why. I didn’t have the grip like I had before with the last two sets of tyres – it was suddenly gone. It’s very strange and that was really disappointing for me. But tomorrow is a long and difficult race and there are opportunities to overtake, so I’m looking ahead in a very positive way."

Ferrari
Kimi Raikkonen: "The car has been feeling good all weekend. We had no problems, apart from the one Sebastian had in qualifying, and everything ran smoothly. We have been making sure that all the small details were correct, we have learned from the past difficult races how small things can make a big change and enable you to get the result you want. We still have some work ahead, obviously we are not happy to finish third in the grid but in the race we’ll try to do better. It’s hard to say what will happen tomorrow but at least we did a better qualifying than normal and we’ll be in a better position for the race. So far it has been ok but tomorrow is the big day. I expect that we can be stronger and challenge for a competitive race. The weather has been tricky these days, so it will be a bit of uncertain tomorrow. Tonight we are going to analyse a lot of data and will try to make the right decisions."

Sebastian Vettel: "Right from the start we didn’t have the full power available, so when I went out for the first run we tried to fix the problem, but we couldn’t. Due to the lack of power we couldn’t make it further. For sure we have to investigate but I don’t think that there’s anything to do with the engine. I think it has more to do with the electronics, but I am confident that we can fix the problem in time for tomorrow’s race. We have plenty of tyres and anything can happen. We have a strong car and a strong pace, so I should be able to score good points. The problem we had this morning in FP3 was completely unrelated."

Williams
Valtteri Bottas: "It was a good lap. I would have liked to be ahead of Ferrari but they are a still a bit quicker than us. Fourth is still a good place to the start and now we are maybe the closest to a podium we have been this season so the fight should be fun. This track suits us but it's still difficult to predict how the race pace is going to be tomorrow. If it's good then we can fight with the others around us for a podium."

Felipe Massa: "I lost a lot of power during the session, so we need to analyse what happened with HPP. It's a good track for us and I'm sure we were going to be competitive but unfortunately I could not do anything. At least it's better to have the problem today than tomorrow. Starting the race 17th is difficult but the race is long and in Canada you can get opportunities, so we will try to get as many points as we can."