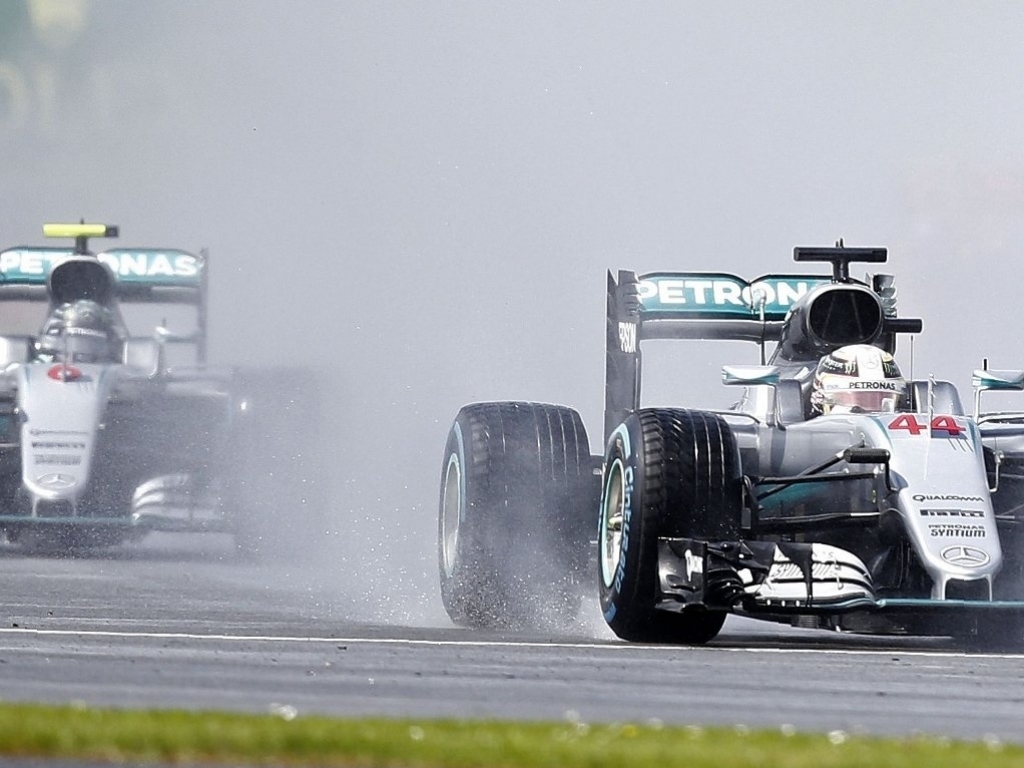 Nico Rosberg secured pole position for the Hungarian GP as he outqualified Lewis Hamilton and Daniel Ricciardo on a chaotic Saturday afternoon.

Mercedes:
Nico Rosberg: "That was a pretty exciting qualifying session. It was crazy conditions in the beginning with all the rain and the big puddles and a lot of cars went off. My car felt very good in the wet – but when it dried out that was the best situation for us as we know the Red Bulls are strong in the wet. I gave it everything at the end of my last lap and it worked out. A big thanks to the team, as it was a great team effort to make sure I always had good track position. It's a great feeling to be on pole here in Hungary. Tomorrow it will be a big battle against Lewis and the Red Bulls, so I look forward to that."

Lewis Hamilton: "I would never have expected to come around that corner and see Fernando facing me! I was four tenths up at that point and feeling really happy with the balance of the car, so pole was there for the taking. But this is racing and I'll do my best from second. A great start would help – it's about time I had one! In practice I felt like I was getting the procedure right, so I'm really hoping to finally get a good one off the line tomorrow. It's a long run to turn one so there's opportunity there and that could make all the difference. My long run pace this morning was pretty good, so hopefully it's going to be a good race."

Red Bull:
Daniel Ricciardo: "When I saw Fernando had spun in Turn 9, I was furious as I was up on my lap by quite a bit and when I heard Nico's pole time, then the time was definitely there. How affected him or Lewis were (by the yellow flag), I don't know, but I think we had better than a 19.9 in us. We don't get many opportunities to get a pole from Mercedes, but I thought today there was definitely a chance. But, the positives are that we were quick, we had good pace and I was happy with the car. I was happy with it yesterday and I think we found even more speed for today, so hopefully that means good things for tomorrow. It was fun with the changing conditions, I really enjoyed it; let's say I embraced the conditions from the start. It was crazy, there was aquaplaning, spray, it was really hairy and the adrenalin was flowing. It was drying very fast and we had to adapt and be on it, it was cool."

Max Verstappen: "It was a bit of a shame in Q3 because everyone was backing off so I also had to back off to get a free lap. If you are within two or three seconds of the car in front you will lose lap time, in qualifying especially you don't want that. I was very unfortunate to miss the line by 0.8 seconds, but there was a yellow flag anyway so I couldn't improve. We can be very happy with 4th after a very tricky qualifying. It's always a bit of a gamble when conditions are like that so you can't really show everything you've got. We had the speed to qualify higher, I feel, but today it wasn't to be. During the race I hope we can go a few steps further and be close to Mercedes, the pace is there for sure and think it will be very exciting. If they have some issues with degradation then there will be opportunities. In FP3 the car was very comfortable, if we can keep the same set up in the race tomorrow I can hopefully fight hard."

Ferrari:
Sebastian Vettel: "I am not happy with P5, because it could have been better. It was quite a mess at the beginning to get through, then at the end I think we had a good performance in the car. We improved for this afternoon, but unfortunately the result doesn't show it. The pace was there, but we were not able to get the lap. It's a shame because in the end it was very good, I think it was already half a second down, then there was a yellow flag which caught us out, but we kept going. Then there was a bit of traffic, sometimes it is just like that. I think we have the pace to compete for the podium tomorrow, hopefully we'll have a good start then we'll go from there. It's a long race, anything can happen here. Other than that, I think that in the race pace usually we are quicker. Usually all the people decide to do the fastest strategy possible, but there's always something you can do. If the occasion comes up to do something smart I know we have the people on board to do it, so I trust them."

Kimi Raikkonen: "I'm disappointed by the result of this qualifying, it's really a shame because our car has been working well all weekend and even in wet conditions the handling was very good. For sure we are far from where we should be. At the end of Q2 I went out for my last attempt and I did a decent lap, at least for that moment, but the conditions were improving every lap, the track was getting faster and unfortunately we did not make it through Q3. Whatever the reason, when the conditions are like today it's not easy. We tried to do the right things, unfortunately we will pay a price tomorrow, it will be difficult to overtake starting from the back but we won't give up. We'll do our best, the speed is there and I'm sure we can make something out."