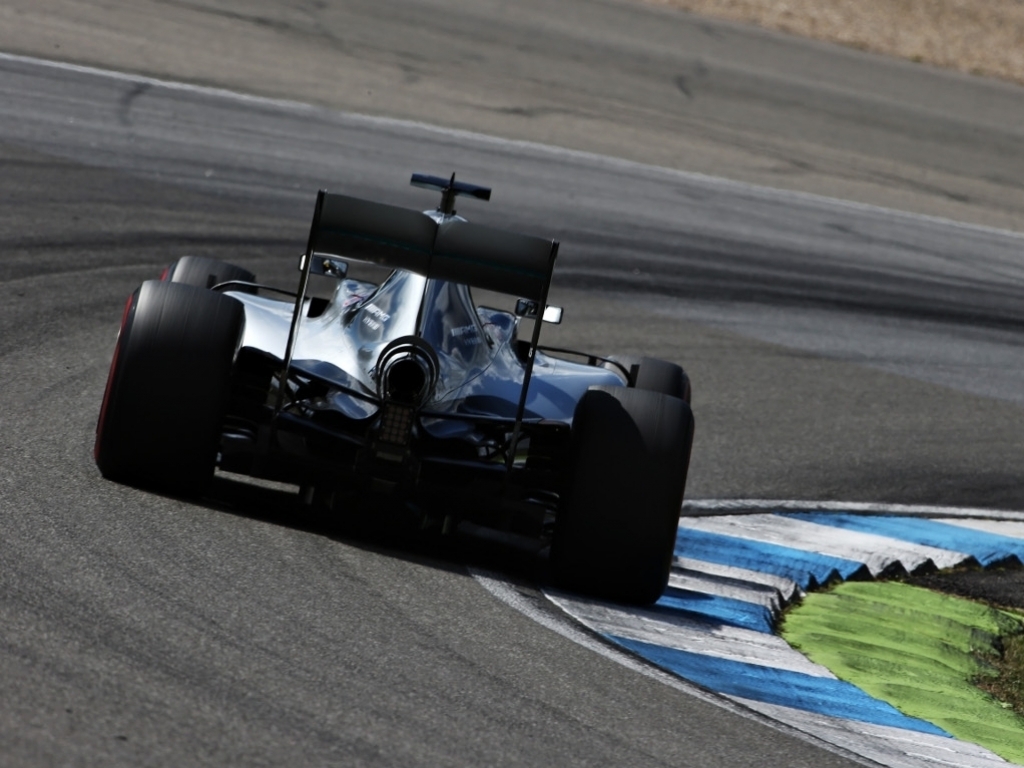 Nico Rosberg pipped his teammate Lewis Hamilton to pole position on home turf, while Red Bull's Daniel Ricciardo made a valiant effort but only managed to claim P3.

Mercedes:
NIco Rosberg: "That was a difficult qualifying for me! I had an electronic problem with my throttle on my first quick run in Q3, so I had to abort. That meant I had a bit more fuel on my final run. I did a pretty good lap but I wasn't sure if that was enough. I'm very happy to start from P1 at my second home race. It was awesome to hear the fans cheering for me after my run. It's a great atmosphere here in Hockenheim and I can't wait for tomorrow. I hope we can put up a good show and that I can win this Grand Prix."

Lewis Hamilton: "There was nothing particularly wrong today. My final lap just didn't work out. It was pretty close out there and sometimes you get it right, sometimes you don't. The car was feeling great. The team did a great job to get it where I needed it to be and it was definitely on for pole. I was two tenths up coming out of T2 – but from T8 onwards it started to deteriorate and I couldn't maintain the gap. I've missed out on pole, so I didn't do what I was supposed to do – but it's in the past now, so you just let it go and look forwards. It doesn't mean the race isn't there to win tomorrow. I'll try to get a good start and see how it goes from there. I don't know what the strategy will be – we'll look through that tonight. But this is a track where you can overtake, so I don't have to go for it at the first corner. It can be somewhere else. Last time we raced here I started dead last and finished on the podium, so this is definitely a big step up from that! The pace is clearly there, so it's still been a good day and I'm generally pretty happy. Hopefully tomorrow I'll be able to do something from where I am. I'm just focused on trying to move forward and if I can drive like I have done in the past few races then anything can happen."

Red Bull:
Daniel Ricciardo: “In Q3 I knew I had to find some more time and I put a really good lap together in the first run. Then I knew there wasn’t much more for the second run so I probably tried a little bit too hard and made a few mistakes, but in the end it was a nice qualifying. Third is a good place to start. Hopefully we can look at Mercedes tomorrow and have a good battle with them and not focus on what’s happening behind us. The feeling in the team is very good at the moment. In the last three races now both Red Bulls have been in front of Ferrari and it seems like we’re getting a little bit closer to Mercedes. Everyone in the team is happy and it’s nice standing here knowing that I’m in the top three. Tomorrow I think we’ll have a good chance. The long runs yesterday looked a bit better than they did in Budapest so let’s see. I’ll start the race on slightly older tyres because I had to do two laps in Q2, which means they are not as fresh for the start but it’ll be fine. I’ll go hard and hopefully get in front and at least lead some of the race. If I can’t lead the last lap then I’ll try and lead some and be on TV. Whoo!”

Max Verstappen: “I’m feeling really good, it was a smooth qualifying. Q3 was strong, it was just a bit of a shame about my last sector where I washed out and lost a few tenths. It’s quite tough to get the tyres in the right window but we still managed a good time. The main target is to be in front of the Ferraris and that is what we have done. That said, we know they will be quick in the race as we saw last week. Mercedes look pretty strong but we are not that far away so I think we can be very happy with that. It’s my first time here in a Formula 1 car and not an easy track to learn so I’m really pleased with today. We can both be satisfied to be on the second row as this track wasn’t expected to be the best for us. Race pace is looking very good for the moment. We definitely want to be challenging for a podium tomorrow, I think a win might be difficult though.”

Ferrari:
Kimi Raikkonen: "Our car was behaving pretty nicely today and I was happy with the handling. My last try in Q3 was a bit more tricky, I was struggling a little bit with the feeling from the tires, but apart from that we had no massive issues. I don't have much to complain from the behavior of the car, we are just lacking speed overall. We need to put more downforce in the car to go faster. This result is disappointing, finishing fifth and sixth it's not ideal, but this is what it is right now, and we keep working to improve. Usually the race is our stronger side, but every circuit is different. Tomorrow it's a new day, we'll do our own race, you never know what is going to happen. We need to make a good getaway from the start and hopefully take the fight to the guys in front, and then do our best."

Sebastian Vettel: "I am not happy with 6th position, it was a difficult session. In the moment I tried to do the best, we didn't get everything together. Somehow we lost a bit and now we need to understand what happened this afternoon. I was reasonaby happy with my lap, but it wasn't quick enough, there was a bit of time we lost here and there, overall we struggled a bit to extract the pace from the car. The balance didn't come together in qualifying, it was better this morning and yesterday. We know the car can be quicker, but we didn't manage to get it in the right window, that's our job and we didn't succeed. I'm sure that tomorrow we'll be competitive, but again we start a little bit from the back foot, so it will be tough because here it's not easy to overtake. I think we don't have to hide, in terms of race pace we are fast, then it should be an interesting race."