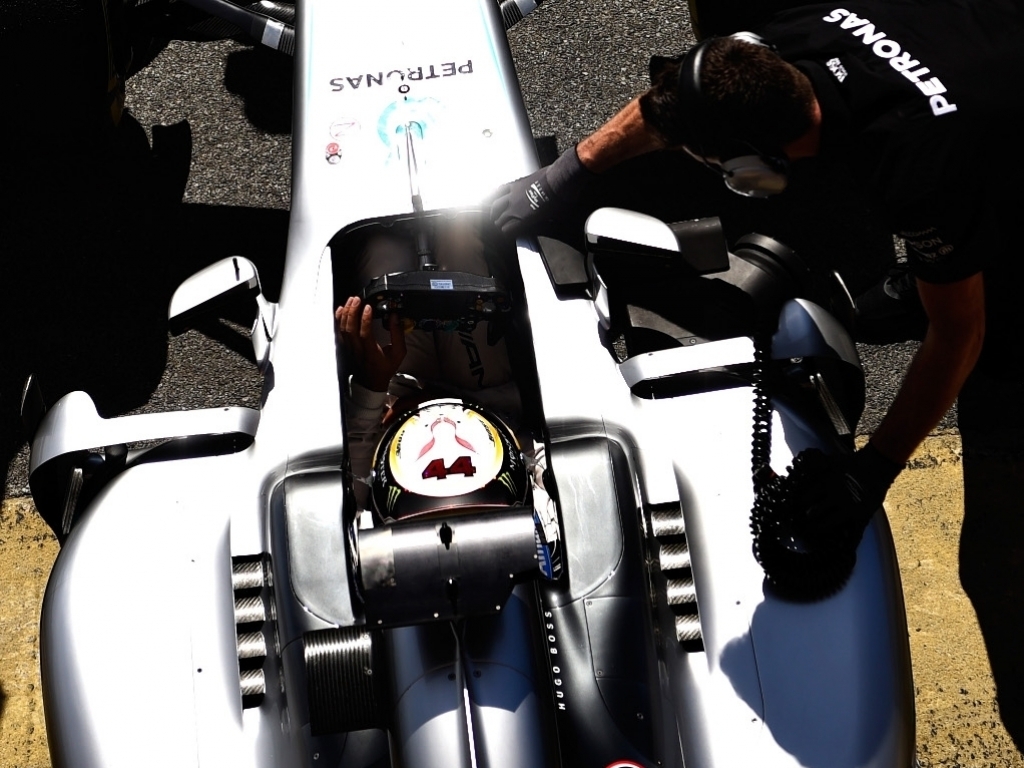 Mercedes:
Lewis Hamilton: "That felt great today to finally put the lap together, I'm very very happy. You always need to put that performance in, it reassures your belief, and Nico had been so fast this weekend, sometimes two tenths quicker, sometimes more. I could see on my data where I was losing, so I had to try and figure it out on track, and it is so satisfying to attack that obstacle and get through it. I am really grateful to the team for working hard overnight to put the car in the right place for me to fight – and now it's three poles from three for me when I've been able to do the laps in qualifying. I haven't had a proper race with Nico yet this year so I am hoping that will start tomorrow. It's very hard to overtake here, so strategy is important, as is looking after the tyres: the forces round this circuit means it just eats the tyres up, so you need to get that balance just right and see it through to the finish."

Nico Rosberg: "Lewis did the better job today but tomorrow is when it really counts. There is a big opportunity for me at the beginning: I had some good starts this year and Lewis hasn't led into the first corner this season so far. Maybe in the race there will be an opportunity. Tyre usage will also play a factor and the right strategy will be crucial. So I'm expecting a pretty interesting race and I'm looking forward to the battle. We need to keep eye on Red Bull as well, as they are surprisingly stronger than Ferrari here."

Red Bull:
Daniel Ricciardo: “Firstly I’m really happy to be back in the top three on Saturday and will try and be back here tomorrow! I’m happy for both of us (Max and I) to be in front of the Ferraris, we are both on the second row, which is pretty awesome. It took a bit of time to come together, but in Q3 I knew I had one lap and knew I had the pace and where I could do it; it was about putting it all together – up until then I hadn’t, but Q3 is what counts and I did it, so I’m really happy.”

Max Verstappen: "I enjoyed the qualifying, it was getting better with every lap. For me the target today was to enjoy myself and I had a good feeling in the car. I focused on what I had to do and it worked. I’m happy, I didn’t expect to adapt to the car so quickly. I didn’t expect to be on the second row, so it’s a positive feeling. We are close to a podium and hopefully we can keep our positions in tomorrow’s race.”

Ferrari:
Kimi Raikkonen: "It was not an easy day: we did our best, but the result is a bit disappointing. We seemed to struggle quite a lot in the last sector and I'm not surprised we were losing a lot of time there. Before qualifying we made some changes to my set-up and the car felt better, but it was not easy to get the laps that we wanted and make the handling exactly as we desired. The car felt ok yesterday, today I was quicker, but the wind has been turning around a bit, making some places quite tricky. My last run was better than so far today, but obviously it's not where we want to be. Our rivals did a better job today, we have to keep working and improving and see what we can do tomorrow in the race."

Sebastian Vettel: "I think every day can be tough but for sure I didn't expect to be that far off, especially because this morning we had a good rhythm. I didn't get hold of the car, I didn't get the feeling that I had earlier today, and couldn't nail the laps. I don't think that it is a surprise, if you don't get it together here it can be quite costly, and we know this. I think the gap to Mercedes is bigger than it has been all weekend. So clearly we didn't get it right. As for tomorrow's race, for sure the further up you qualify, the better: this rule applies everywhere. We will focus on the start, first lap and then there is a long race, and lot of things we can do. Usually there are several pit-stops here so we can play with the strategy and pass people that are slower than us. I think the car is quicker than P6, so I have high hopes for tomorrow."

Williams:
Valtteri Bottas: "I was hoping for a bit better result, but it was a good lap so I am pleased with how we did in Q3. It’s a shame about Felipe. Tomorrow, we need to set the bar high and aim to be in the top five in the race. It’s possible with a good start and our strategy, so we’ll try to make up as many places as we can."

Felipe Massa: "Overall it’s a disappointing qualifying session. Our fastest car is in seventh position which is where we predicted we would get to, but it’s not enough. Valtteri did everything that he could with the car to get to that position, and we’re quite close to the Ferraris, which is positive. Felipe didn’t get his lap right and we didn’t have enough time to do another run, so we need to look at what’s gone wrong on his lap, because we had eight tenths of a margin to get through into Q2, and then we have to look at what we could have done better operationally as well. We’ll dissect everything, be open and honest, and do better. What we have to concentrate on now is the race tomorrow. Valtteri’s starting from a good position, and hopefully he can get some good points and get amongst the cars in front. With Felipe we need to be a little clever with the strategy, and think about what we can do in order to get into the back end of the points with him."