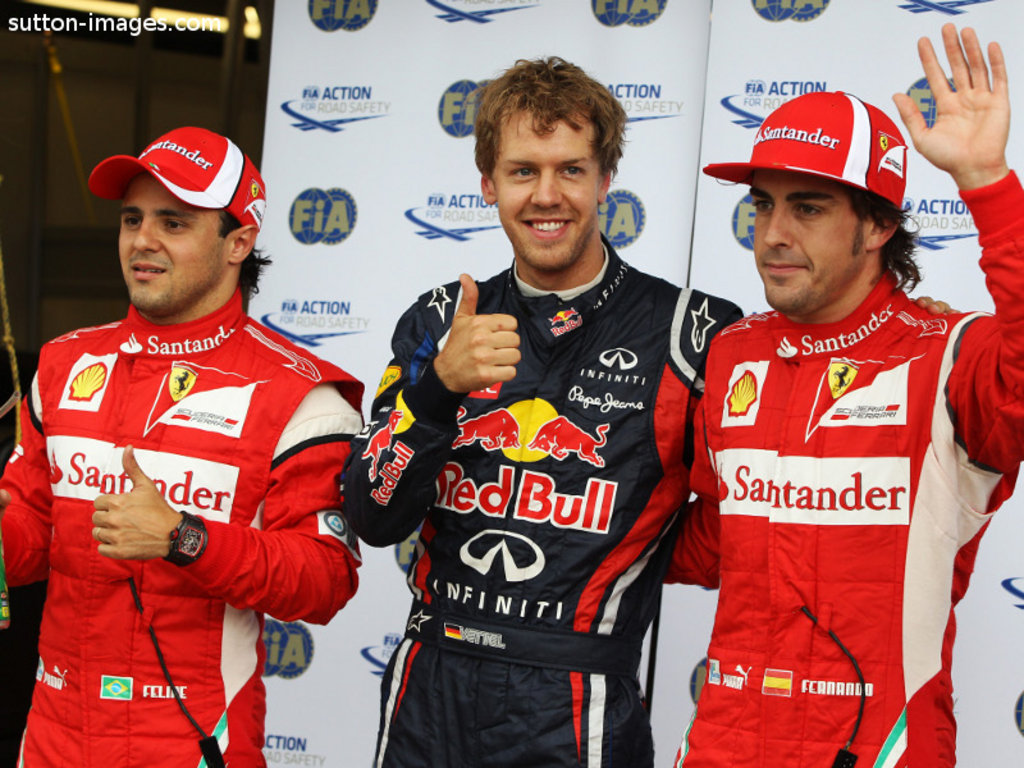 Red Bull:
Sebastian Vettel: “I’m happy with that. We’ve made up some ground from last year when we committed to a different strategy and sacrificed qualifying, but this year I feel comfortable. I had a rough start yesterday morning, but thankfully the guys could fix the car and I had more practice in the afternoon, which is important here. It’s a tricky track to understand, with the kerbs and the chicanes, coming from high speeds with hard braking, but we had a smooth qualifying session today and two very good runs. All in all, I’m very happy. It’s obviously a big step we’ve made today, but the big task comes tomorrow. The conditions are likely to change and I’m sure we’ll see some rain – the question is when and how much. We’ll see, but P1 is the best position to start from.”

Mark Webber: “It was a good afternoon and I was happy with how we recovered. I couldn’t have got much more out of the car for qualifying today; I didn’t have KERS, which affected my performance. The guys did everything they could to get it ready after the problem we had this morning and we were confident that it was fixed, but on the formation lap it lapsed again. We tried to recover it for Q3, but it wasn’t possible. A front row would have been nice to have here, but fourth is towards the front and the second row is good considering our day. It’s a long Grand Prix tomorrow and there’s likely to be a bit of weather coming in, so it should be an interesting race.”

Ferrari:
Fernando Alonso: “It’s been a long time – since Singapore 2010 in fact – that I was last on the front row and I am pleased that Felipe is also right up close to me on the starting grid. It means the whole team has worked well, at the track and back home on trying to improve our car performance. It was important to show we can be competitive and we managed it. In Q3, we had some doubts about strategy – whether it would be better to do just a single lap at the start and then three or split the runs equally – but it’s hard to say which would really have been the best choice. Clearly, on a track like this, where aerodynamic downforce is not as important as elsewhere, our deficiencies are a bit masked but it’s equally true that the updates we brought here worked as we had expected and that’s important for the rest of the championship, because we want to be fighting for the top places. It could rain tomorrow, which would make the race even more chaotic than usual: we must be ready to make the most of any opportunity. We will try to put the Red Bulls under pressure, right from the start, but we know McLaren will also be very strong, especially as their rear wing is possibly better adapted to the conditions in the case of a wet track.”

Felipe Massa: “It’s been a great weekend so far: we have always been competitive and finally we will be able to start from a good grid position. Tomorrow, the weather could be different and therefore we must be ready to tackle any eventuality. I have been happy with the way the car is handling right from yesterday and I am very confident for the race. The team is working well and we really hope we can put an end to this run of negative results. The fact the gap to the Red Bull is smaller here is encouraging, also for the future. We know that at this track, the race is very difficult, but also, from what we have seen so far, our car is more competitive in the race than in qualifying. I expect McLaren will be very strong tomorrow as will be the Red Bulls obviously. A podium would be a great result, fighting for the win would be even better. What will happen if it rains? That’s a good question, because this year we have never had a real opportunity to run in the wet. On top of that, at this track, the slightest slip up carries a very high price, therefore it’s important to be very careful.”

McLaren:
Lewis Hamilton: “Personally, I was very happy with my lap: I don’t think I’ve ever driven a car as hard in my life as I did this afternoon. I was right on the ragged edge and I think I even touched the wall at one stage. But, even so, I managed only P5; that was all I could do. Nonetheless, I’m still hopeful that we’ll bring further improvements to the car soon – it’s just a matter of time. I hope our race pace will prove to be stronger tomorrow than our qualifying pace was today: we’re losing a couple of tenths along the back straight, which hurt us in qualifying. We’ve got a long seventh gear – a bit too long for qualifying perhaps – but that should be good for overtaking and will be a help when I’m slipstreaming as it means I won’t be on the limiter. That should enable me to challenge the guys in front of me, in fact. It’s going to be a tough afternoon tomorrow, but it’s always a long and unpredictable race here and we’re definitely not out of the fight.”

Jenson Button: “We didn’t quite have the pace that we’d hoped for – and that’s a little frustrating. My last lap in Q3 was looking really good – but then I overdrove, started locking up and lost a bit of time. I was very close to pipping Nico [Rosberg] at the end, but I suppose starting sixth wouldn’t have been a whole lot better than starting seventh. Also, in P7 I’m on the clean side of the grid for the start. Our race pace is always better than our qualifying pace, and this is a circuit where you can overtake, so we’ve got to hope we’ll be able to make some progress through the field. Fortunately, our consistency on both the Soft and Supersoft tyres has looked pretty good. We’ll do the best we can – I’m sure it’ll be a fun race.”

Mercedes GP:
Nico Rosberg: “Generally we have made good progress this weekend and qualifying in sixth position was good for us today. I’m pretty confident that we can do better in the race, certainly compared to our pace in Monaco. We’ve put in a lot of work on race performance and I hope we can translate that tomorrow. It’s good to have saved a set of new options as well.”

Michael Schumacher: “We can be quite happy with today’s qualifying. I had lost drive momentarily after turn four during my last lap but otherwise I had a clean lap. We will have to analyse why that happened, but all went pretty well other than that. We have developed our set-up in the right direction over the weekend, and the long runs looked quite good this morning, so we should be ok in the race.”