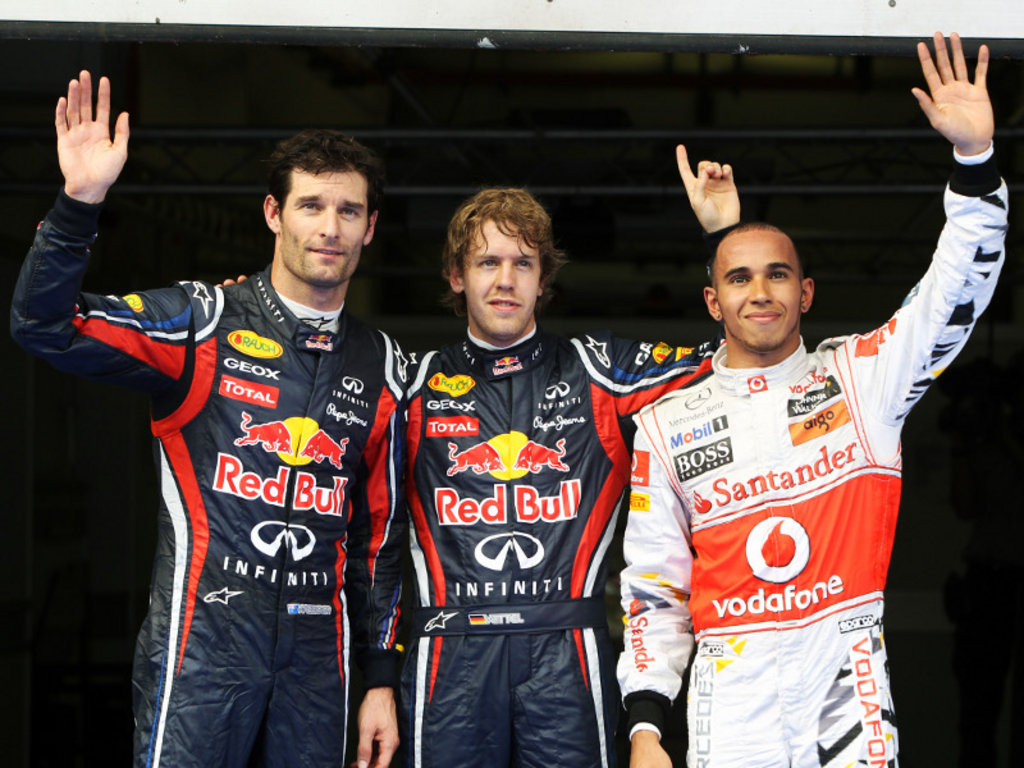 Red Bull:
Sebastian Vettel: “It was a challenging weekend until qualifying today. I was happy with the car, but we never really got into a rhythm. Yesterday wasn’t as smooth as we hoped for, but we knew the car had speed, so the main thing was to keep believing in it. In qualifying everything worked out straight away. It was very close in the end with the McLaren guys, so I’m happy to get pole. Big compliments to the guys in the team – especially those working on KERS, they did a lot of work since Australia. If we wouldn’t have had it today, we wouldn’t be sitting here now, neither me nor Mark, so compliments to the guys – it’s a good reward. It’s very hot in the garage for the boys during this race, the air is pretty humid, so at least tonight they will get some good sleep ahead of tomorrow.”

Mark Webber: “I knew it would be very tight; everyone was on a single pace after the first flying lap on the option tyre in Q3. It was pretty straight forward for us; you have to just drive as quick as you can when it’s like that. We can’t control how tight it is, to get a few tenths more, you have to just do your best. It was a better performance from me today compared to Melbourne and I’m looking forward to tomorrow. I’m starting on the clean side of the grid and it should be an interesting race – I think there will be a lot of pit stops.”

McLaren:
Lewis Hamilton: “That was an almost perfect lap – I lost a tenth-and-a-half in Turn 14 – so we’re much closer to the front than we’d anticipated, which is positive for us. I’m really happy to be up on the front row. Hopefully, I’ll have a better start than I did in Melbourne, so we can have more of a fight and I’ll get a chance to compete with Sebastian at the first corner and for the first couple of laps. It’s looking like a three-stop race tomorrow. It’s been dry for the past two days, so I hope it’s dry tomorrow. Being on the front row certainly helps when it rains, and it also gives us more opportunities to take a step forward. I have no doubt that we can overtake Red Bull in the development battle – it’s just a question of when. We have to keep pushing to bring new components to the races; we can push this car to the maximum.”

Jenson Button: “I just wish Q2 had been Q3, but it wasn’t! I had a touch more oversteer in Q3, but that’s the set-up direction I chose to take. The balance was pretty good, but I hurt the tyres a little bit too much in the final sector, and that left me in fourth. It looks like it’s going to be a fun scrap tomorrow – we’re a lot closer to the Red Bulls than I think many people expected, and there’s a margin over the guys behind us, so hopefully it will be the four of us playing tomorrow. Our starts weren’t great in Melbourne. I hope they’ll be better in this race; we have a very good KERS Hybrid system, so hopefully it will help us and we can really attack into Turn One. I’m looking forward to tomorrow – the weather has held off for the past two days. And if it’s a dry race, we really should be able to take the race to the Red Bulls.”

Ferrari:
Fernando Alonso: “We weren’t quick enough in Australia and we are not here in Malaysia either, at least not enough to fight for pole position. From what we have seen over these two races, there are two teams who have worked better than us over the winter and clearly we have to make some progress in terms of performance and there is no secret about that: we need to make a step of some quality, we need to be aggressive in our development to make up lost ground. At the same time, we have to stay calm and concentrated and, in the meantime, bring home as many points as possible, exploiting every opportunity that comes our way. The championship is very long and last year, we saw how the situation can change continuously from one race to the next. So, I feel this fifth place is a positive result, because so much could happen tomorrow, especially if it rains. Overnight and this morning after FP3, we improved the set-up of the car and I felt more comfortable than yesterday. I will start from the clean side of the track, which is never a bad thing. It’s difficult to make predictions for the race: yesterday we saw very high tyre degradation, so we can expect three to four stops. On Sunday in Melbourne, our pace was close to that of the McLarens and I was able to fight with Webber, but there in qualifying, McLaren was closer than they are here.”

Felipe Massa: “It was definitely not an easy qualifying, especially looking at the times the top four were able to do. We fought with the others but clearly, compared to the best, tomorrow, we will be running a defensive race. From a strategy point of view, if it’s dry we can expect three or four stops. If it really rained, then anything could happen and we will have to be ready for any eventuality. Today, the best result we could hope for was fifth: I was not able to do that, partly because I did not do a perfect lap, but at least I will start from the clean side of the track. We know we lack aerodynamic downforce: we are working on it, but only when we have made some progress will we be able to fight for the top places.”

Renault:
Nick Heidfeld: “I’m very satisfied as I think it’s the maximum we could have achieved, especially looking back at Friday where we didn’t do many laps at all and didn’t have a lot of time to set up the car. It got faster and faster in qualifying today, but I have to say in Q1 I took it easy then I pushed a bit over the limit in Q2 and lost some time there, but in Q3 I found the golden middle and it was a good lap. Of course, I was a lot happier with the traffic here than I was in Australia.”

Vitaly Petrov: “To get in the top ten today is a good result considering the track time we lost yesterday. We worked hard on improving the set-up in final practice and in the end I had quite a good feeling with the car. For the race, anything can happen, but it’s clear that looking after the tyres will be very important because the degradation is very high here. We will also have to watch what happens with the weather because there is a high risk of rain. I don’t mind if it’s wet or dry.”