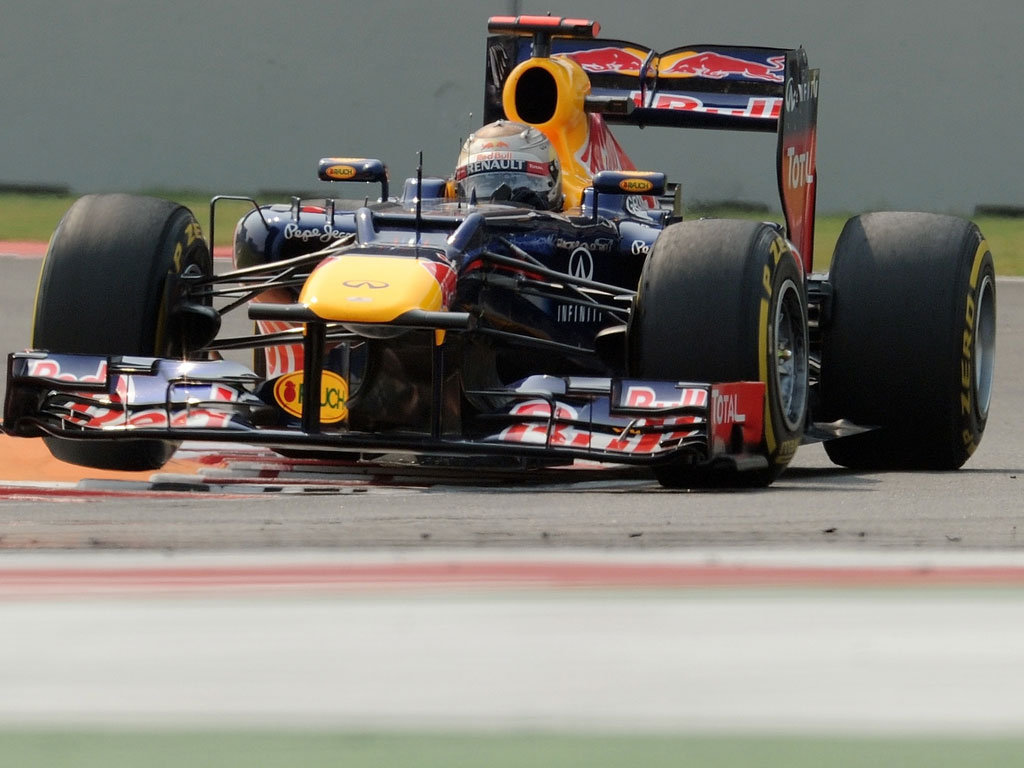 Sebastian Vettel led a Red Bull 1-2 in Saturday’s qualifying for the Indian GP, edging the McLarens and Ferraris…

Sebastian Vettel led a Red Bull 1-2 in Saturday’s qualifying for the Indian GP, edging the McLarens and Ferraris…

Red Bull:
Sebastian Vettel: “Pole is the best place to start from, so I’m happy with that. We had a good qualifying session and a good weekend so far with no car issues. My first attempt in Q3 wasn’t great, I was a bit too greedy with braking into Turn 4, but after that we had a good second run and it was enough for pole. McLaren, Ferrari and Lotus look competitive in race trim, so we’ll see what happens tomorrow – they will be pushing hard.”

Mark Webber: It was great for us today. We put in a lot of effort to make sure we had a great car to get as high up the grid as possible. It was very, very close with Seb and I, both of us only really had one run in Q3, Seb made a mistake on his first lap and I couldn’t get the tyre prep right for the second run, but that’s how it was. Tomorrow should be a good race, I think it will be tighter between all of us, but we should have enough. It’s a challenging track with quick chicanes and you need to be very accurate when entering the corners.”

McLaren:
Lewis Hamilton: “I’m very satisfied that I’ll be starting tomorrow’s race from the second row. This is one of the best circuits we race on and I definitely think third position gives us a fighting chance to win tomorrow. Even if I’d had a perfect qualifying lap, I think I’d only have found another tenth. I reckon I got everything out of the car, particularly on my final run in Q3; the middle and last sectors were particularly strong. At the start tomorrow, I feel I have a lot less to lose than Sebastian [Vettel] in front of me, so I’ll certainly be pushing a bit. Seb has more to worry about than I do, and, if I can get up with the two Red Bulls, I’d love to take a win for Vodafone McLaren Mercedes. We have the race pace to be able to stay with the Red Bulls, so as I say a win is definitely possible.”

Jenson Button: “Fourth isn’t a bad place from which to be starting tomorrow’s race. We struggled a little to get the Options [tyres] working, particularly on the first lap, so I went for a different strategy from most other drivers, carrying out a three-lap run. The longer run really worked out for me in Q2, in fact, but I didn’t quite have the right balance in Q3: I had a bit more understeer, as the circuit had gripped-up more than we’d anticipated. In terms of my performance, my Q2 lap was better than my Q3 lap. Overall, as a team, we should be reasonably happy with what we achieved today: we’re not far from the Red Bulls and we’re ahead of the Ferraris. As a result, I’m very excited about the race tomorrow. Our starts tend to be pretty good, so let’s see what we can do from the second row.”

Ferrari:
Fernando Alonso: “We tried to get the most out of what we had, but there was no way we could be ahead of the Red Bulls and McLarens. In the end, fifth place is not so bad, because it would have been easy to end up even further back if anything had gone wrong. Clearly, finishing ahead of Red Bull is our aim, but today it was impossible to fight them, at least in qualifying: when we had a similar car, it was possible to fight with Vettel and we have even been ahead of them, but now we are fighting against Newey and, at the moment we cannot match him. We brought some updates here which have worked as we expected, but the others have also improved over these past two weeks: it’s down to us to bring something more significant for the final three races. I am not concerned nor demotivated, because I know that things can change very quickly and that high spirits on Saturday can easily turn to sadness on Sunday. We must try and make up places on the first lap and try to put pressure on our main rivals, ensuring they don’t have an easy race. There are sixty laps to work with and we will need to tackle each one as if it’s qualifying, by attacking. Clearly I hope I can soon have a more competitive car to try and fight them on equal terms on Saturday and not just on Sunday. I definitely am not the sort to give up and that’s my real advantage.”

Felipe Massa: “I am reasonably pleased with sixth place, even if maybe, but for a mistake at Turn 6 on my run in Q3, I could have started from further forward. In Qualifying Red Bull is faster, while McLaren was only just ahead and then it’s us: in the races, things are a bit different and we hope we can fight with these four cars for the top places. There are many key points for tomorrow: the start, strategy, tyre wear and not making mistakes. We will need to be very focused because it will be a very long race. Today, it wasn’t easy to put together the perfect lap, partly because the track surface was still quite slippery. We have brought updates here which seem to work, but maybe it’s not enough to be ahead of our closest rivals.”

Lotus F1:
Kimi Raikkonen: “We changed the car after this morning’s session and we were quite confident heading in to qualifying. Unfortunately, we didn’t seem to have any grip this afternoon so it was much more difficult than we thought. I’m quite disappointed to be starting from seventh as I thought we had a much better car than that.”

Romain Grosjean: “I was expecting better so I’m a little disappointed, however in terms of strategy P11 has one advantage as you’re the first car that can choose which tyres it will start the race on and I have a couple of new sets in my pocket for tomorrow. I wish I could have got through into Q3 and lacking two hundredths of a second to make it there was frustrating. On my second timed lap I was doing well, but for whatever reason the car snapped on me and I lost time. It was difficult to get everything right, but we’re looking strong to score some good points tomorrow.”