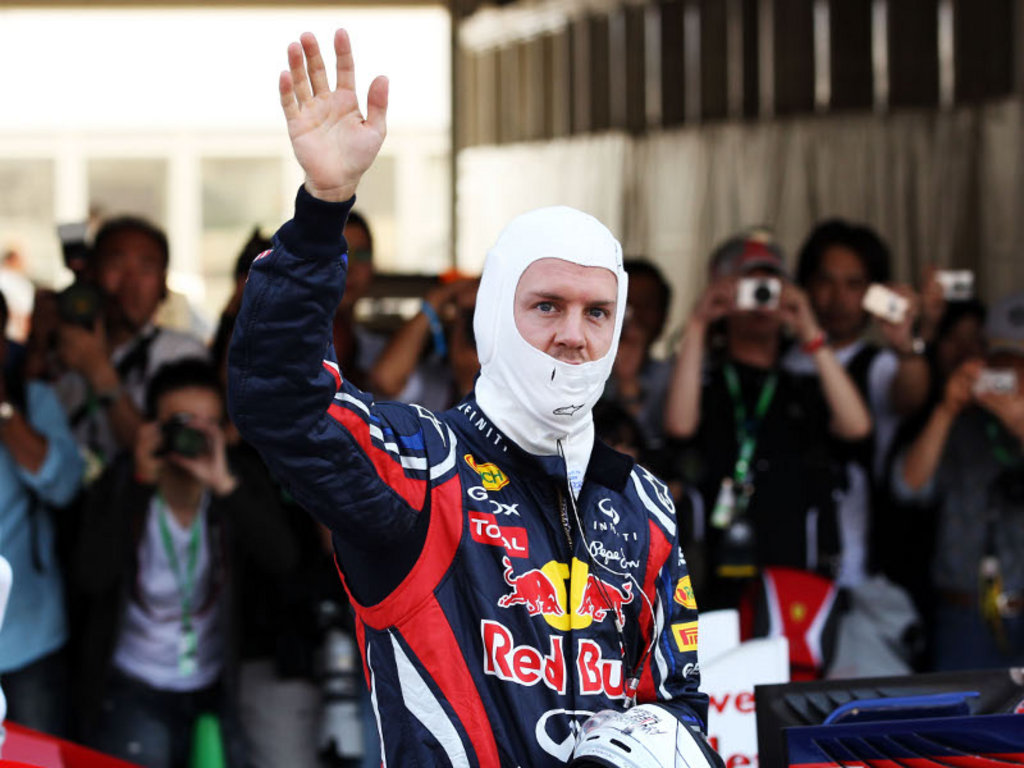 Sebastian Vettel claimed pole position in Japan, finishing ahead of the McLaren drivers and the two Ferraris…

Sebastian Vettel claimed pole position in Japan, finishing ahead of the McLaren drivers and the two Ferraris…

Red Bull:
Sebastian Vettel: “I went off in the free practice yesterday and damaged the front wing, so it wasn’t ideal to prepare the car for today. We suffered a bit from that this morning regarding the car’s balance and were too slow. We sat down after P3 and looked at where we could improve and we were able to extract everything out of the car in qualifying, which was crucial. There wasn’t much between me and Jenson! I want to say thanks to the team and the factory for getting another front wing out for me, I would not sit here now without them, so I’m very happy and very proud. Regarding one point or no point tomorrow, I’m not focussing on that. I had a lesson yesterday where for a little moment I wasn’t 100% focused and lost the car. Tomorrow is a long race and it’s challenging; I’m looking forward to it. We really love to come here, it’s a special atmosphere and the fans are so passionate and crazy. When we leave the hotel in the morning, it’s full of people and they’re all screaming, so it’s a nice feeling to be part of that and starting from pole tomorrow will be special. It’s a long race and a lot of things can happen.”

Mark Webber: “I’m very surprised to be sixth. I did my best, but it wasn’t quick enough and it was a bit of a surprise that I couldn’t go with the pace there at the end. Seb obviously did a massive lap for pole so he got on the front row just, which was a great effort. I’m disappointed to be on the third row. The car was pretty good yesterday on the long run – and it was good on short runs too, up until the end there – so clearly I didn’t get the most out of it today. I’ll wake up and push tomorrow.”

McLaren:
Jenson Button: “This is the closest I’ve been to pole position all season, but it’s still not pole: tomorrow’s grid will still be the same distance from first to second place. But I’m satisfied, because I didn’t leave anything out on the track today – I feel like I got everything I could from the car; there was nothing left. I think the whole team feels encouraged because we didn’t come to this race with any significant upgrades, we just got the car working well all weekend. We have a more efficient rear wing, particularly with DRS, but we’ve just made this car very quick on high-speed circuits. We were quick at Spa, and we’re quick here too, so it’s no surprise. Our Friday long-runs on high-fuel were less than ideal, but we’ve seen the form vary significantly between Friday and Sunday, so tomorrow should be very different. Sunday’s the important day: we start second, but it’s so, so close. I really hope we can take the fight to Red Bull tomorrow.”

Lewis Hamilton: “I’m happy to be third – I’ll be starting from the cleaner side of the grid, and we can have a good race from there. And I’m pleased that we’ve been extremely competitive all weekend. We’ve definitely shown an improvement: to be so close at a high-speed circuit like this means we’re doing well. It’s very encouraging, because if we’d had this car at the beginning of the season, I think the championship could have been a different story. In Q3, my final attempt at a lap was compromised when I entered the final corner on my out-lap and, from out of nowhere, Mark [Webber] shot up the inside of me. Then Michael [Schumacher] came past on my outside and went across the grass. Those incidents delayed me, so I couldn’t reach the startline to begin my lap – it was an interesting situation but we were all up against it to get across the line. I might be starting third, but I know I’m as quick as the two guys in front of me. It’s not been a fantastic weekend for me so far, so hopefully that’ll change tomorrow.”

Ferrari:
Felipe Massa: “It was a difficult qualifying session but at least we managed to keep one of the four best cars behind us. It’s never easy here to put together the perfect lap and my last run was very good, even if I lost a little bit in the final sector. Tomorrow, it will be important to get a good start. Hamilton alongside me on the grid? It makes no difference to me if it’s him or anyone else. The race looks like being a complicated one, with a lot of stops to change tyres that show significant degradation here, so it follows that strategy will play a key role. It will be vital to find the right pace, so as to be quick, but at the same time, save the tyres. Overtaking will not be easy, despite KERS and DRS: maybe tyre wear will count for more, given that you come onto the main straight off a very slow chicane. Our aim is the podium: we’re starting one place off it, so it’s a realistic expectation.”

Fernando Alonso: “I am not very surprised by this result: at the end of the day, McLaren and Red Bull have been quicker than us all weekend long and at least we have managed to get ahead of Webber. I seem to have a season ticket for fifth place this year and at least it means I start from the clean side of the track.Tomorrow I expect significant tyre degradation to be a key feature of the race, with the possibility of several pit stops, which means strategy will play a very important role. We hope we won’t have the same problems as in Singapore two weeks ago. We will try and make the best choices and fight for a podium finish, which is a realistic target. The win is certainly less so: as we saw in qualifying, McLaren seem very close to Red Bull here. The start will also be an important moment: both myself and Felipe will try and put pressure on those closest to us and then, if we happen to make up some places we will try and have our say. My first run in Q3? I was pushing to the maximum but, after looking at the lap time analysis, I don’t think I could have done much better than my second run.”

Mercedes GP:
Michael Schumacher: “It was a tricky ending to my qualifying session today, but at least we have saved a set of tyres for the race tomorrow. We are still in a good position for gathering some important points, and obviously that is what I am geared to do. I am very happy with how we worked as a team to improve our performance this weekend, and I am really looking forward to having a good race at this great track which is one of my favourites.”

Nico Rosberg: “On my first lap out in Q1, the team advised that I had a problem and asked me to come back into the pits. We tried to fix it in time for me to complete a lap, however the hydraulic systems are quite complicated and there just wasn’t enough time. So for the race, I have a promising strategy with all the new tyres that I have! But seriously, I will push and try to get into the top ten. That will be my aim tomorrow.”