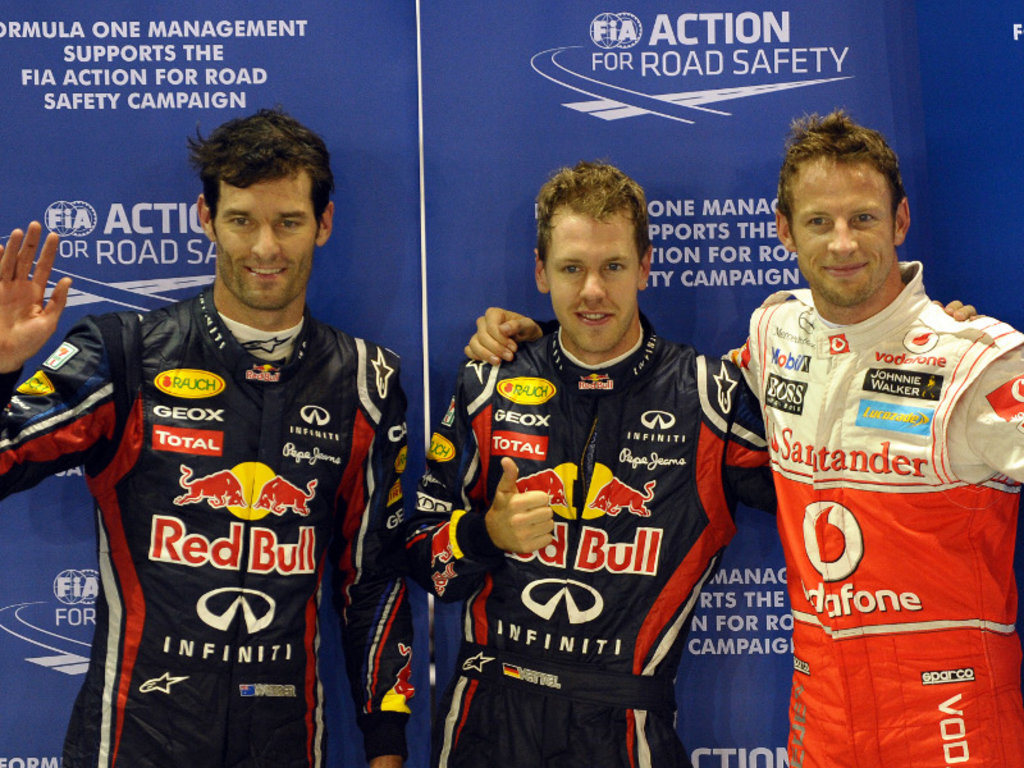 Different race but same story as Sebastian Vettel took pole position in Singapore, finishing ahead of Webber and Button…

Different race but same story as Sebastian Vettel took pole position in Singapore, finishing ahead of Webber and Button…

Red Bull:
Sebastian Vettel: “On the last run, I maybe tried a bit too much going into the really tricky chicane around Turn 10. I think I could have made it, but I decided to abort the lap, as it can be so easy to damage the car. I was happy with my first lap – I think the track ramped up a little bit by the end, so it was possible to go faster, but all in all it was a perfect session and I’m very happy, especially around here. It’s a very fun track and a big challenge. It’s difficult with so many corners and it’s a long lap to get everything together, but we kept our heads cool and did it today. It’s great we have both cars on the front row, but let’s see tomorrow, it’s a very, very long race.”

Mark Webber: “I’m pretty happy with that. It’s been a pretty testing venue for me in the past, particularly on Saturdays, although racing I normally go a bit better around here. Seb laid it down pretty hard and fast for all of us today – he’s very quick round here and he did a great job for the pole. It’s pretty rare he makes a mistake. He was very quick for the whole lap and to put it all together for all of us is very challenging here – it’s easy to make up a bit, but then lose it on the next straight. Overall I’m satisfied and given the curveballs that teams can face around here to have both cars up there is a great result for us.”

McLaren:
Jenson Button: “We did a lot of work overnight, so the car is now working very well and we should be pretty happy with what we’ve achieved so far this weekend. Qualifying was a bit tricky in terms of getting the car to work in all three sectors. We’re putting a lot of heat into the tyres – so if we push hard in the first sector, we lose rear-end grip by the third sector. It’s difficult trying to find that balance, but I think we got reasonably close to it this evening. It’s only a short run down to Turn One, but I’d still like to be at least second into the first corner, so as to be able to challenge Seb [Vettel] from early on. Lining up third also means I’ll be starting from the clean side of the grid. Tomorrow will be all about looking after the rear tyres: it’s a long race – the longest of the season – so it’s going to be hard and hot. A lot could happen tomorrow, and I’m really looking forward to it.”

Lewis Hamilton: “I had a pretty eventful time in all three qualifying sessions: in Q1, I damaged part of the floor on the kerbs and the mechanics did an absolutely fantastic job to get it fixed and the car turned around for the next session. So I want to say a big ‘thanks’ to the guys for pulling out all the stops. I’m still not entirely sure how I picked up the puncture at the end of Q2. I went over a kerb at Turn 10 and the tyre sensors detected a sudden loss of pressure. There are quite a few bolts hanging out of the kerbs, so I guess it could have been one of those, but we don’t really know. At the end of Q3, we had an issue with the refuelling process – we couldn’t get enough fuel into the car quick enough. In the end, we just ran out of time, so I couldn’t fit in my final run. But that’s racing, and sometimes these things happen. Fortunately, my first Q3 run had been very good. I reckon there was still a bit more time to come – I lost some time behind Fernando [Alonso], when I got within a second of his car in the final sector of the lap – so if I’d managed to get another run in Q3 I’d have probably been able to make up some time there. But, all in all, fourth place isn’t too bad – and, as I say, the most encouraging thing is that we’ve still got more pace up our sleeve. So, yes, I think the front row could have been possible. There’s only a short run down to Turn One tomorrow, which means it’ll be hard to overtake in the initial run down to the first braking point, so I think the race is going to be less about the start and more about looking after the tyres.”

Ferrari:
Fernando Alonso: “I am pleased with this qualifying, because I think that might have been my best Q3 lap of the whole year. I gave it 120%, taking risks in some corners, but that was the only way I could hope to fight for the top places. If I’d driven a normal lap, I would have finished in the same position, but half a second off the two McLarens, rather than less than a tenth. Sure, if I was in front of Hamilton and Button, then it would be a completely different story, but that’s how it turned out and there’s no point saying we were unlucky. I am convinced that a podium finish is within our reach. Usually, we go better in the race than in qualifying and there is no reason why that should not be the case here. We will try and make up some places at the start, even if, at this track, there is not much of a run from the start line to the first corner. Then we will try and make the most of our strategy and any eventual tyre degradation levels lower than that of some our opponents. This is a very hard race for the mechanical parts of the car and the Safety Car is usually involved: we will see what happens, but, I say it again, I am confident in our chances of getting to the podium.”

Felipe Massa: “Sixth is definitely not the result we were aiming for, but we have to accept it. Now we must think about the race which definitely does not look like being an easy one: tyre degradation is significant, both on the Soft and the Supersoft and will have to be able to adapt to that as best we can. I think that, as never before, getting the strategy right will be the key to having a good race. We are definitely more competitive here than we were in Monza. Today, it was not easy putting together a perfect lap and, even if the car was much improved compared to the last free practice session, I still had a lot of oversteer, especially when the rear tyres were overheating in the second and third sectors. The incident with Hamilton? Honestly, I don’t understand why he wanted to pass at all costs: we were all in a line on our “out” lap and there was nothing to be gained from acting like that.”

Mercedes GP:
Nico Rosberg: “I had a good fast lap in Q3 and we were able to take the most out of the car today so I’m quite satisfied. Starting in seventh place was the maximum that we could have achieved, although Massa was very close so it was definitely worth trying to catch him. Being on the clean side at the grid gives me a good position for the start, so I will try to make up positions there and score some good points. I think it will be an exciting race here with all the new things like DRS and the Pirelli tyres.”

Michael Schumacher: “It was quite a tactical qualifying session, in which we chose not to run in Q3 to save new tyres for the race. In theory, this should be worth some time over the race distance, so it was a