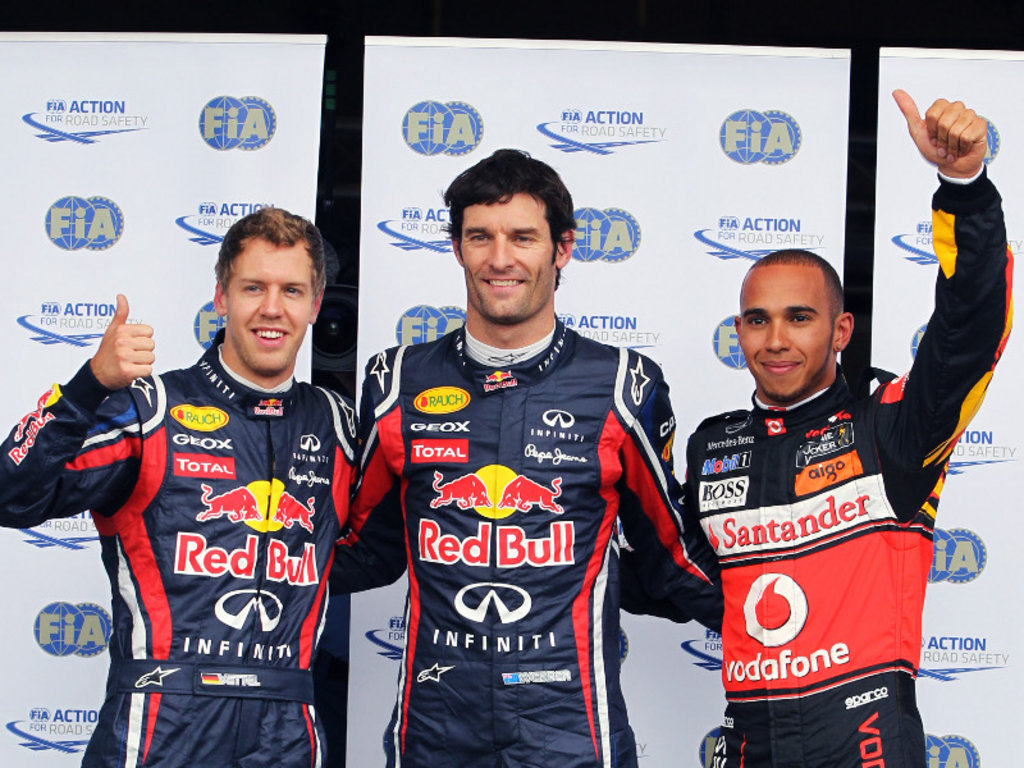 Red Bull:
Mark Webber: “The session went pretty well, with the exception of my run in Q2, which wasn’t very smooth. The other sessions were good and the boys did a great job on the car; they’ve had some late nights in the lead up to the event, so they’ve recovered very well. I thought on my in-lap, ‘if someone gets me, they deserve it’, as I don’t think I could have got much more out of it – it was my limit and a pretty good lap. It was very satisfying to see no one got me there at the end, it’s quite an anxious wait for those thirty seconds. I will be in there pushing very hard tomorrow.”

Sebastian Vettel: “It was tough session. I think we had a good recovery, as yesterday I didn’t really find my way, but the car felt much better this morning. I think we could have been a bit quicker in qualifying here and there, but Mark did a good lap and I think we still have a good chance from third on the grid. It will be a long race and you never know what can happen with the weather here. Rain is forecast, but we don’t know how much we will have and when. However, in the end it doesn’t really matter, the most important thing is that we have a solid race and the target is to win, which is not impossible from third – it’s the clean side of the track and we go from there. I’m looking forward to tomorrow – it doesn’t happen too often that you have so many people coming here and supporting the German drivers, so I will make sure I enjoy the race tomorrow.”

McLaren:
Lewis Hamilton: “First of all I want to say a huge congratulations to the whole team, who did a great job today. Everyone back at the factory and here at the circuit has been working massively hard, and that’s the reason why the car was so quick today. I think we all underestimated how good the car would be, in fact.

“To split the Red Bulls and be ahead of the Ferraris is a fantastic effort by the team. We’ve got a big job ahead of us tomorrow, of course, but today I’m on a high: that lap was a real boost.

“I reckon today’s qualifying session was one of my best ever, definitely my best this season. The car felt great, we had really good balance and I think it’s one of the best laps I’ve done in the car. You’re already on the limit in your first lap of Q3, and usually if you improve in the second run it’s by a tenth; but today it was by four-tenths. I don’t really know where I found the time, and to be honest I’m going to get a recording of the onboard footage and watch it back because I’d love to see it!”

Jenson Button: “My car felt pretty good this morning, but this afternoon during quali I couldn’t find enough grip out there on either the Prime or the Option tyre. We’ll look into it this evening to better understand what happened.

“However, Lewis drove a brilliant lap to be second on the grid – so congratulations to him. Actually, his pace is encouraging for me too, because it shows there’s more speed in the car if only we can find it. Also, yesterday showed that our long-run pace is pretty good, so that’s encouraging too.

“So, when you consider that I’ve had a rather troubled couple of days, I suppose P7 is a reasonable platform from which to try to score as many world championship points as possible during the race tomorrow.

“As always, here at the N