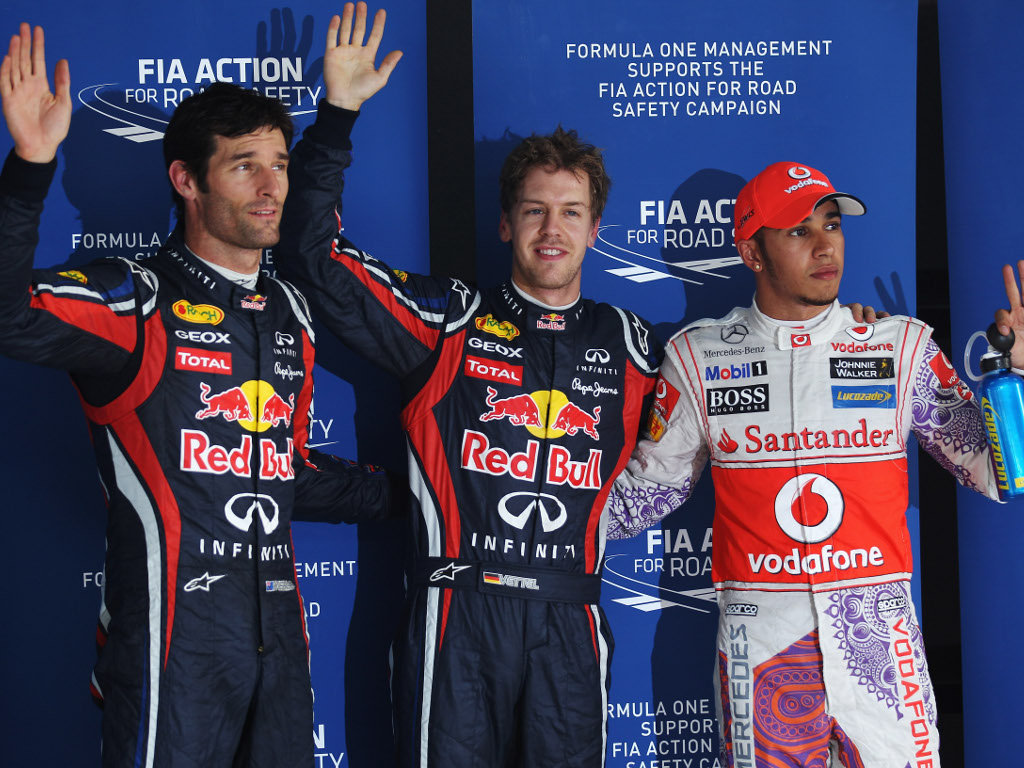 Red Bull:
Sebastian Vettel: “It was an interesting qualifying session; a new circuit and a new challenge – obviously I’m very happy to be on the front row. I don’t know if being on the left or the right side of the track (we are on the left), is really an advantage or not; there’s not one side that seems to be the clean side, as we tend to run down the middle. It was a good battle and after the first run it was very close, so I knew I had to do a little bit better on the second. We decided to only do one timed lap each time, it was still a bit slippery, but overall I’m very happy. Tomorrow it going to be a long race, we start starting the best possible position, so we’ll see what happens.”

Mark Webber: “This new venue has been a good challenge for us. It was tricky to work out the right strategy for qualifying. The tyres weren’t easy for one timed lap, so we had to work out how to do the right strategy – lots of teams tried different styles to get the best lap time out of the car. The first sector was tricky to get right on one timed lap. I could have done better in the first sector on my first lap in Q3; I couldn’t complete my second, as there were yellow flags after Massa’s incident. Overall it’s a good job for the team, we’ve come to a new venue, prepared well and we’ve laid a good foundation for a very good race tomorrow.”

McLaren:
Lewis Hamilton: “To be able to split the Red Bulls on qualifying pace is something that everybody in the team should feel proud about. In fact, I’ve been really happy with my qualifying performance throughout the whole year – it’s been getting more and more consistent. On my last run, I was only a tenth down going into the penultimate corner, but I chose to abort the lap and save the tyres for tomorrow as it’s going to be a long race.

“It’s a little bit unfortunate to have a grid penalty, but that’s life. I think we’ve got good pace, but it’s going to be a long race. Still, with the long, wide straights and two DRS zones, overtaking should be easier here than it is at some of the other circuits, so I’m optimistic about what we can do around here tomorrow.

“Finally, I want to say a big thank-you to the organisers. This circuit is smooth, fast and flowing. It’s beautiful, in fact; the facilities are fantastic and the people have been extremely welcoming. This is one of the best circuits in the world and it’s definitely a race people should come to visit.”

Jenson Button: “The car felt great this morning but I couldn’t find any grip this afternoon, particularly on the Prime tyre. So we need to work out why we can’t find that balance because I want to try to improve things for tomorrow.

“I struggled with traffic all afternoon – it was difficult to find a clear lap, and, when I did, I’d taken too much out of my tyres already. On my final run, I saw Felipe [Massa] heading into the gravel as I came up to him. I definitely would have been quicker on that run, but I got into the yellow flag zone, saw his car, spotted the smoke and backed out of it a little bit. I definitely lost time in the sector – the data showed that I was 14km/h down in fact.

“I hope I can take the car I had yesterday, as opposed to the car I had this afternoon, into the race. It felt stronger on high-fuel during Friday running, so hopefully we can find that again tomorrow.”

Ferrari:
Fernando Alonso: “It was important to get onto the front two rows, as it’s easier to fight for a good result from here. I don’t think there’s much of a difference between the two vertical lines of the grid because the ideal line on the start-finish straight goes down the middle, so both sides are quite dirty. In fact the dirt off the racing line could be a problem for overtaking with whoever initiates the move having to give it everything without hesitating. So far, this weekend has gone as expected and now we will try and do a good job tomorrow. It would be very nice to bring home one of the trophies that will be handed out to those who make it to the podium on Formula 1’s debut in India. I came very close to the front row, which is a bit of a surprise. In recent qualifying sessions, we have not managed to get as close as this to our main rivals and already yesterday we looked reasonably competitive. Usually, on Sunday our performance level is better but that does not automatically mean that we will be fighting for the win. There are too many unknowns, even more than usual and then, we have seen how things can change from one track to another. In Suzuka, we came within a whisker of the win and in Singapore we were not competitive. We will be doing our best, that’s for sure.”

Felipe Massa: “What happened on my last timed lap was a real shame. Today, we had the potential to secure a good placing, as Fernando demonstrated and as can also be seen from the fact my sixth best time was set with a rather slow third sector. I came into Turn 8 and went over the kerb and the front right suspension gave way in the impact with the raised orange part, which in my opinion is too high at this point. It’s a very fast corner, taken at around 215 km/h and it could be arranged differently. These are details that need improving for next year. I repeat, I am disappointed, because the car has been going well all weekend long. Now I find myself with one less set of Softs and with a broken front wing. It was the new one, which we had here for the first time and it delivered a bit extra in terms of performance. Tomorrow, overtaking will be difficult because of the dirt on track, but I think we will still see a lot.”

Mercedes GP:
Nico Rosberg: “I’m pleased that we made a step forward today but we could perhaps have finished higher. In Q1, I hit a kerb quite heavily and damaged the floor which lost some of the car’s downforce for the rest of qualifying. I was on my quickest lap at the end of Q3 but unfortunately I had to slow down for the yellow flag after Felipe’s incident so that cost me some time. I will push hard to gain places tomorrow and have a good race on this fantastic track. I’m guessing it will be an exciting race and the Indian people should be proud to have one of the best tracks in the world of motorsport now!”

Michael Schumacher: “Qualifying today was not really very good for us. At first I hit some traffic, and then on my final run in Q2, there was again vibrations on the set of tyres which I used which was not helpful. Saying that, this certainly does not explain the time gap to Nico so we need to understand what the reason was for that and get on top of it. As for the race