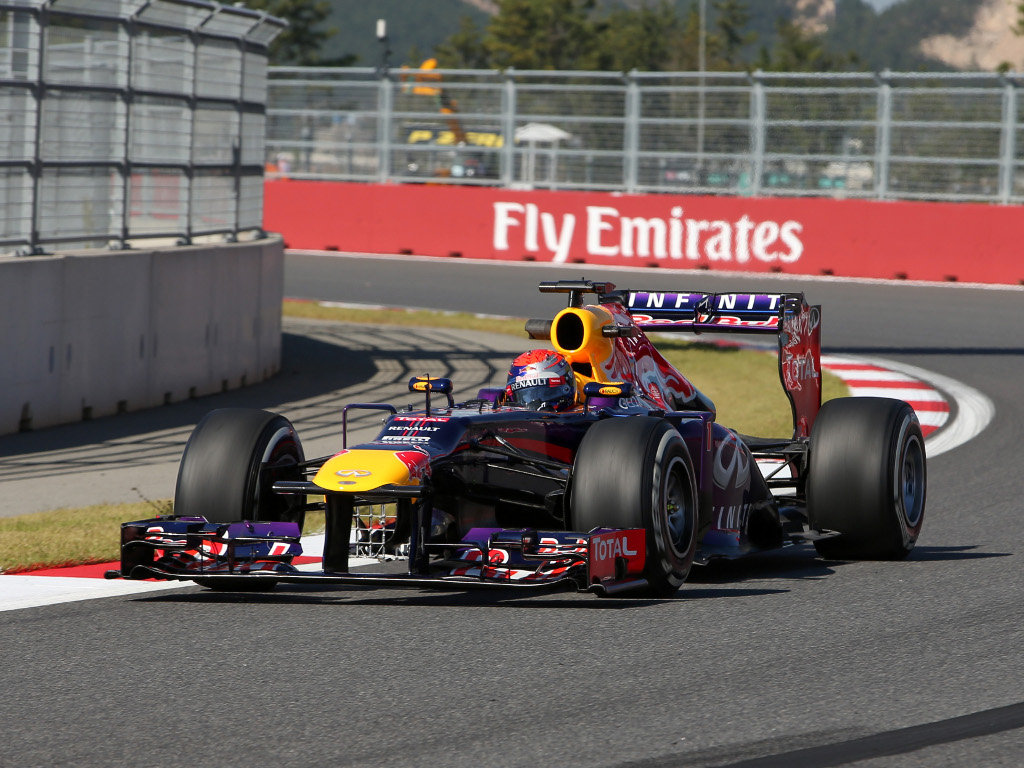 Red Bull:
Sebastian Vettel: “It was close today. I had a very good lap in Q3 on my first attempt and thought I would find it hard to do better. On my second attempt I caught Kimi on the warm up lap and didn’t have time to drop back, but fortunately the first lap was good enough. Mercedes were strong and seem to be comfortable in the middle sector. We’re good in Sector one this year which a surprise as that’s mostly straights. We improved the car from yesterday as I wasn’t entirely happy with it after the second practice. In terms of conditions, we should be okay if it’s dry or wet tomorrow; it’s not clear if we get some rain from the typhoon, but let’s see what happens.”

Mark Webber: “We had to take a bit of pace out of the car for qualifying, not much, but it was about how we would compromise between qualifying and the race tomorrow. I’m pretty happy, I could be two positions further up but that would mean, with the penalty, I would be 11th rather than 13th. It was a pretty tight qualifying with the two Mercedes, Seb and myself. Tomorrow’s race will be interesting, I will be out of position, but we’ll fight and come back through. I think we improved the car in some areas from yesterday.”

Mercedes:
Lewis Hamilton: “I’m really happy with second position today as it felt like I got everything out of the car today. The guys have done a great job to get the package as it is here: we came into the weekend knowing that Red Bull had an advantage, so to be as close as I am in terms of performance is a real positive. Hopefully we have closed the gap a little bit. Our long-run pace yesterday looked good and pretty close to theirs but there will be threats all around us in tomorrow’s race. A couple of years ago, I was on pole and Seb got past me at the start, so I’d like to repay him on that one! I need to make sure we get a good start, position the car as well as possible and when there’s a gap, I’ll be going for it. We know that the weather will change a bit for tomorrow and I don’t mind how it turns out. I’d prefer dry conditions but we’ll see what the day brings and roll with it.”

Nico Rosberg: “I haven’t found the right car balance all weekend so far and that’s the reason why I’m a bit disappointed with today’s result – even if my actual starting position of fourth place is pretty good. The first sector of the track is good for overtaking, so hopefully that will give us some opportunities in the opening laps, but Red Bull still seems to have the edge here overall. If I get a good start like I managed in Singapore, then a podium finish is possible based on the performance we were able to show in the long runs on Friday.”

Ferrari:
Fernando Alonso: “I am not surprised at the outcome of this qualifying session, because in terms of pure performance, Saturday is always difficult for us and will continue to be so until the end of the season. Usually, on Sunday, things go better and our aim is always to get to the podium, as has happened in recent races. This weekend seems harder than usual, because while up until now we have always had a good race pace, both yesterday and today we suffered on the long runs and that means we must absolutely improve for tomorrow. We have a few problems with the tyres which we are unable to manage as well as the others: there’s a lot of graining and if you push very hard in the first sector you almost risk being unable to finish the lap. We will have to find the right compromise to get them to survive the number of laps proposed by our engineers, because the ideal strategy is still a two stop. Given how we look in the dry, the rain could mix things up and in fact we have nothing to lose and even if there will be little time to adapt to it, we must be ready for this eventuality”.

Felipe Massa: “I can’t be happy with the result of qualifying, as I expected to be closer to our rivals than in Singapore. But that wasn’t the case, because here too, both Red Bull and Mercedes had a much faster pace and we didn’t manage to get everything out of our car. Tomorrow I hope to be more competitive, even if it won’t be an easy race. The degradation on the Supersofts on our car is rather high, while other cars are suffering less, and based on how the first stint goes, we will decide if we should switch to the Mediums, which at the moment seems like the best choice. Apart from Red Bull, Mercedes and one Lotus ahead of us, we will have to be very careful about other cars that are also very close and it will be important to get a very good start, trying to push to the maximum to bring home a reasonable points haul. It would definitely require a lot of luck to make it to the podium.”

Lotus F1:
Romain Grosjean: “Our aim was to be up there fighting with the Mercedes today and that’s exactly where we were. The Red Bulls were always going to be quick, so to be reasonably close to them in terms of the times is not too bad. Gaining a place on the grid just because another driver has been penalised is not how you want to move forwards, but I’ve had to cope with it before myself and it’s part of the sport. Of course, it will be an advantage for us as it means we’ll start on the clean side of the track. Tomorrow will be interesting in terms of what effect the tyre degradation has, but our race pace looked strong yesterday so we’re aiming for a good result.”

Kimi Raikkonen: “I made a mistake on my only set of new tyres in the final qualifying session so my lap wasn’t fast enough for a better position, which eventually meant I ended up tenth and will start from ninth position tomorrow. We’ve had a bit of understeer in the car so I’ve struggled a little all weekend. If you look at the long run pace yesterday we should have a stronger race, but obviously we have to see how the weather turns out. We hope to do better tomorrow.”