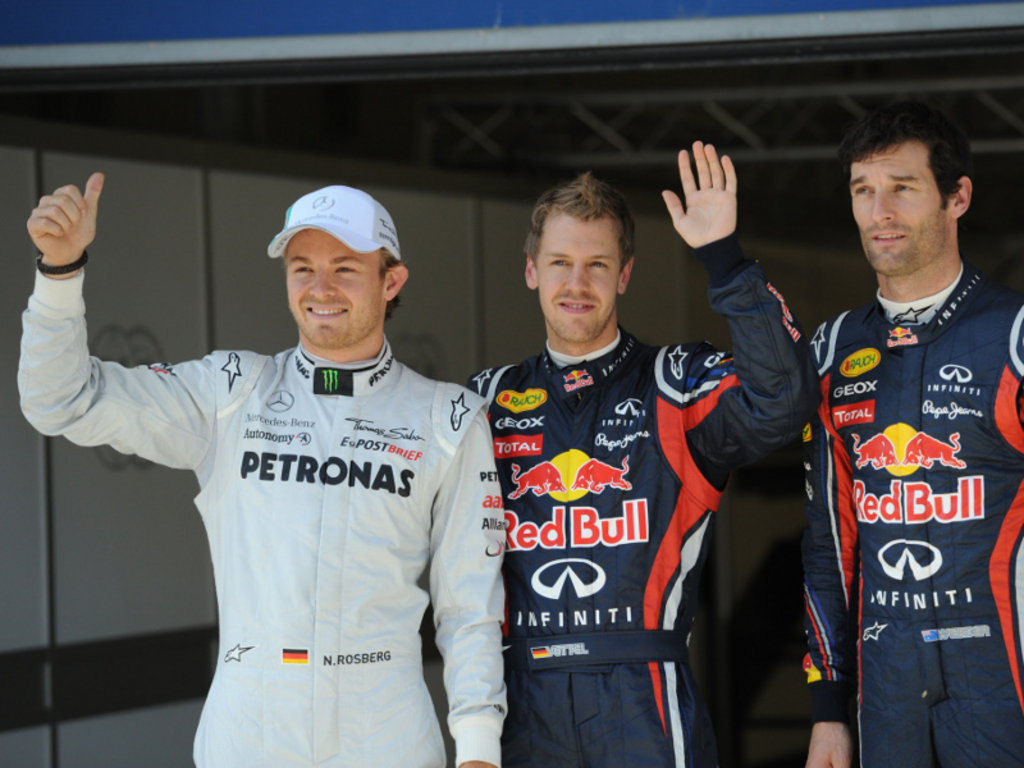 Red Bull:
Sebastian Vettel: “I’m very happy. It was a bit funny in Q3 today, as both Mark and I decided we would skip the second run and so we finished earlier than normal. It was a strange feeling, as the other cars are on track setting times and you are in the garage watching – they might beat you, but you can only watch the screens and there’s nothing you can do. It was an odd feeling but a good decision to save tyres for tomorrow’s race. I messed up the car yesterday morning, so we missed the session in the afternoon, but the guys fixed it for today and I think they did a very good job. We have been up there with the times today, although we didn’t have a trouble free morning and we had a bit to catch up. I like the track here which helps and it was nice to see that, without many laps, I was able to come back and find the rhythm, so all-in-all I’m very happy today.”

Mark Webber: “I would have liked to have got a couple more tenths to have the margin; obviously Sebastian did a very good lap for pole, but my lap wasn’t too bad. We spoke before qualifying and decided that, as tomorrow is going to be a long race, every lap you could save today might help tomorrow. It turns out that we’re in the best possible grid positions and the team did a good job, as we have saved a set of tyres too, so it’s looking good. There were some good decisions from the team. I’m happy with today and am looking forward to tomorrow’s race.”

Mercedes GP:
Nico Rosberg: “I’m very happy with our performance in qualifying and it’s amazing to see where we are right now. After a difficult start to the season, we are getting closer to the front and I’m pleased that we are making a small step forward each weekend: thank you to the team for a great job so far. We saved one set of new soft tyres for the race, which will be important in terms of strategy. I’m really looking forward to the race.”

Michael Schumacher: “Understandably I am not happy at all with today’s qualifying. It was just strange, it seemed that the more I pushed on my last lap, the more went wrong. I was at the limit of what I had in my hand but the car was just sliding around and therefore I never got into my rhythm. It’s a real shame after this morning’s promising session.”

McLaren:
Lewis Hamilton: “We’re starting on the dirty side of the grid – so our biggest challenge tomorrow could be getting off the line. Every year here I’ve started on the dirty side here! Mercedes GP and Ferrari have picked up their pace, and it might be hard to overtake the Mercedes GP because they’re very fast on the straights; so if it pans out like that, the Red Bulls could edge away from us. We don’t have an extra set of [unused] tyres, but you never know what the weather will do tomorrow. We’re definitely in the fight and I’ll be pushing all the way – just as we did last year. So I’ll try to get a good start tomorrow – fingers crossed we can gain some places that way. I’m looking forward to driving a strong grand prix – it’s a long race here and there should be opportunities to overtake.”

Jenson Button: “Sixth position isn’t great, but we can still do well: Mark Webber had a good race from 18th in China, so we can definitely have a good race from sixth. Maybe I should have just done a single run for Q3 because my second run wasn’t any faster than my first – and you tend to lose time if you push these tyres too hard. But to be honest I couldn’t get a really good balance in qualifying. It’s difficult to know people’s overall pace from Friday running because the changeable weather has mixed everything up. I’d hoped for more but we’ll see what happens. It’s a pity that I’m on the dirty side of the track – it might cause a few problems with the getaway into Turn One tomorrow – but we’re competitive. We’ll be in the running tomorrow.”

Ferrari:
Fernando Alonso: “Fifth place is not the sort of result one can be pleased about, but today I am happy because I felt the car was more competitive than it has been in the first three qualifying sessions of the season. Getting into Q2 without using the soft tyres is significant. We have made a small step forward in terms of performance: it’s not yet enough and we quickly need to make a bigger one, but it’s definitely a confidence boost for the whole team, who are working in the right direction. I would say that this the first sign of light at the end of the tunnel in this early part of the season. Fifth place also means I avoid the dirty side of the track, which is usually a big handicap here. It’s hard to say what will be the best strategy for tomorrow, because we don’t know how the tyres will behave: we will have to be ready for any eventuality and be very flexible. Finally, I want to take the opportunity to express my great sadness at the death of a great personality in Spanish sport, Severiano Ballesteros, who put Spain on the golfing map: I offer all my sympathies to those close to him at this painful time.”

Felipe Massa: “It was not a good qualifying for me: I did not manage to get a clean lap in Q3 after I made a significant mistake at Turn 9, when I ended up going off line: we therefore decided it was better to pit and save that set of tyres for the start. In Q1, with the hards, I did not get a great lap and so as not to take any risks, we decided to also use the softs, so I only had one new set available for the final part of qualifying. Now we will see what we can do in the race tomorrow: usually our pace is better than in qualifying, but it will not be easy to do well, given that I’m starting from tenth. We will see what the tyre degradation will be like, maybe it will be a bit higher than what we saw in China. A shame, as I could have been on the third row, along with my team-mate. This morning, in FP3, the engineers saw an engine parameter that they were not sure about and so it was decided to change it at the end of the session. So I went back to the engine I had already used in Malaysia and China, which according to the schedule is still meant to do three races.”