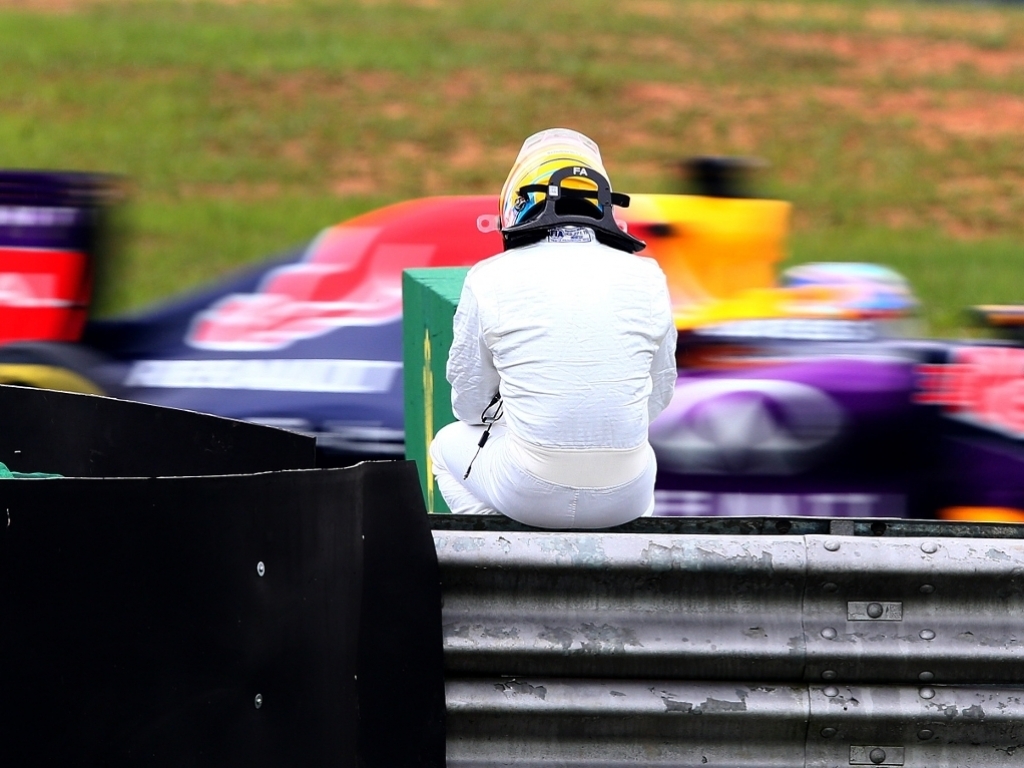 Another shocker of a qualifying day for McLaren at Interlagos with Fernando Alonso suffering yet another engine problem.

Sauber
Felipe Nasr: “The car felt quite good today. We made the right changes to the car for the warm weather conditions that were expected for qualifying. I was on a good lap on my last try, which nearly put me in Q3. I am satisfied for myself and also for the team. The penalty is a shame, but I will do my best to finish the race in the points.”

Marcus Ericsson: “It was a decent qualifying with a close battle in the midfield. But overall I feel a bit disappointed, because I was not fully satisfied with the balance of the car. Besides that, my laps were not ideal. Anyway, we have a decent starting position for tomorrow, not too far from points.”

Lotus
Romain Grosjean: “Firstly, my thoughts today are with everyone in affected by the events in Paris. I have lived in the city for many years and have so many friends there so I was particularly shocked and saddened by what has happened. Qualifying didn’t go the way I wanted. The car felt good in Q1 then it was quite tricky in Q2. We need to look closely at what went wrong as it was a lost opportunity for us.”

Pastor Maldonado: “It was a tough session. We expected to be more competitive this afternoon but unfortunately we weren’t. We had been trying a number of different set-ups with the car to improve the feeling especially the rear of the car. Hopefully we will have better pace to have a solid race and be more competitive tomorrow.”

McLaren
Jenson Button: “It’s been a tricky weekend, and I’ve struggled with the car. Having said that, it began to work much better in qualifying. It was much more enjoyable to drive than it was this morning, when we had less aero balance. Moreover, the car is definitely set up for the race; I still don’t know how competitive we’ll be, because deployment is going to be a big issue here, but we’ll give it a go and we’ll see what we end up with. I’m hoping for a wet race. If it rains it will open up more opportunities, and we’ll hopefully capitalise on it. I’m looking forward to it. Speaking more generally, it’s been a tough season. But, even so, we’ve had a lot of support, and it’s meant a lot to us – to me personally – and I want to reassure the fans that we’re all in it together and we’ll work through it together too. Finally, my heart goes out to everyone affected by the horrific tragedy in Paris. Hopefully, all of France knows that we stand by them. It’s horrific for the whole world, and it affects everyone. Everyone wants peace; it doesn’t matter what country you live in, it affects us all, and it has to stop. We’ve all got to pull together: that’s the only way we’ll get through this.”

Fernando Alonso: “This is a tough period. After I didn’t take part in the Mexican Grand Prix, and then missed out entirely on qualifying here in Brazil, well, there’s a degree of frustration, obviously. But we understand our situation, and we need to learn from all our mistakes and put everything in place so as not to repeat them next year. I think all our weaknesses are being identified, however. The actions we’re taking are logical and sensible, so I’m still optimistic, even though here and even Abu Dhabi are going to be difficult for us. Last but far from least, I want to send my sincerest support and deepest sympathy to France and the French people, who experienced such a terrible tragedy in their capital city yesterday. It was a shocking event, but I firmly believe that sport has a role to play in such circumstances, showing that nations can and should be united. So I hope that, together, all of us in Formula 1 can put on a great race tomorrow, so as to demonstrate that.”

Manor
Alexander Rossi: “After a challenging Friday, when we struggled to find a good baseline, I am very pleased to be the quicker car in qualifying. The boys did a great job analysing the set up overnight and I feel quite confident in the changes that were made and the car that we have going into tomorrow’s race. This is my last race for the team this year, so I will be looking to maximise our starting position and I will definitely enjoy every lap.”

Will Stevens: “One thing I have learnt this year is to worry less about the qualifying set-up and focus more for the race, which is what we are trying this weekend. I think this weekend will be one of the hardest of the year on the rear tyres so it was important to concentrate on balance for the race. I think it will be close between myself and Alex tomorrow, so I’m looking forward to it!”