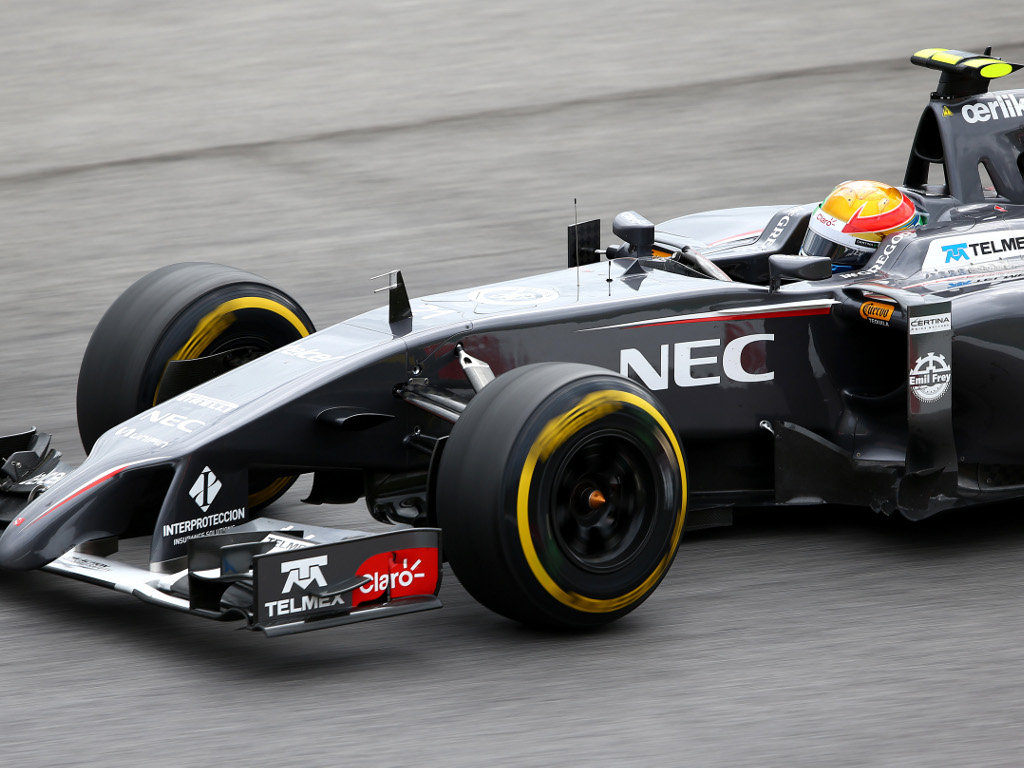 Sauber failed to make any inroads in Saturday’s qualifying for the Austrian GP, joining Marussia and Caterham at the back of the field…

Sauber:
Esteban Gutierrez: “We knew from FP3 that it would be a tough qualifying. At the moment we are quite limited and the amount of time we are missing is definitely not satisfying. We need to keep on working because other teams are catching up. Regarding the track, turn eight is tough in terms of track limits. We did not have the penalty for exceeding the limits on Friday, but today and also for the race we will have it. When you push and get into the corner with a higher speed, it is a risk to go out of the track’s limits. That is another characteristic we need to address. However, I am looking forward for the race as anything can happen.”

Adrian Sutil: “The qualifying procedure went well and the team sent me out on track at the right time, so that I was not hindered by other drivers. The set-up of the car was the best today in comparison to the rest of the weekend. On my fast lap, I was pushing to the limit and and managed to get the maximum out of the car. Obviously, 17th position is not satisfying, but at the moment we cannot move up, which we have to accept in our current situation. For tomorrow’s race, we hope to achieve more.”

Marussia:
Jules Bianchi: “I’m pretty happy with where we ended up today. There is still a few tenths between us and the Saubers, but then we did not get the perfect lap either, so there is more to come. On my first run we lost the radio connection, so I was driving a little blind. My lap was not so good, but it still showed some good promise versus Sutil ahead, and with Gutierrez behind at that point. My second run was better and I think it shows that there is still a bit of work to do to get on terms with them. If we can get the most from the car tomorrow, we can certainly have a good fight with them and I hope we can deliver a good result for the Team.”

Max Chilton: “I went into qualifying having lost a bit of track time at the end of Free Practice 3, including my last set of prime tyres and also the Supersoft run, so we didn’t get the best preparation. On my second run I got traffic from Ericsson, so I wasn’t able to improve, and unfortunately this just allowed Kobayashi to squeeze ahead. I’m confident in the pace of the car though so, given the penalty I will take tomorrow, the first job tomorrow will be getting back on the right side of the Caterham and then targeting the cars in front.”

Caterham:
Kamui Kobayashi: “Compared to quite a few of the previous races we tried something different with the setup here and that’s given us some real improvements in the car, helping close the gap to our direct rivals and there’s more to come from it at other tracks. As the setup change worked well in Austria, a track that is at the lower end in terms of aero sensitivity, believe it will work even better at tracks like Silverstone where there’s much greater emphasis on aero performance, and that’s a good boost for the team on track and back at the factory. With this change I think I had one of the best laps of the season in quali. There was maybe another tenth left but I was pretty much flat out for the whole lap and pleased we finished closer to our nearest competitors than maybe the times had suggested so far this weekend. It makes the race tomorrow very exciting for sure as there’s a group of cars together who will be fighting right from turn one, so strategy and pitstops, both in planning and execution, something we’ve been really good at this year, are going to play an even more important part than normal.”

Marcus Ericsson: “From the first lap in FP3 I was happier in the car. Traction had improved, the balance was better and it was just easier to drive. I wanted to keep working on the braking as there was time to be found from there so we had a look at that on a couple of the runs and I think we found a small improvement for quali and the race. However, in Q1 we did two runs on the supersofts but I couldn’t put a clean lap together and finished up with a time I’m obviously disappointed with. From the timesheets it looks like all the Renault teams are struggling a bit on outright power and that, combined with a lot of traffic to deal with on this short circuit, meant I just couldn’t string three clean sectors together on any of my flying laps – that means my final time is not really representative, but what’s done is done. Now I’m focused on the race and determined to make up for today. We’ve been ok on heavy fuel here and I think we’re due a bit of luck, so hopefully that will come tomorrow. Whether it does or not I’ll continue doing the best job I can.”