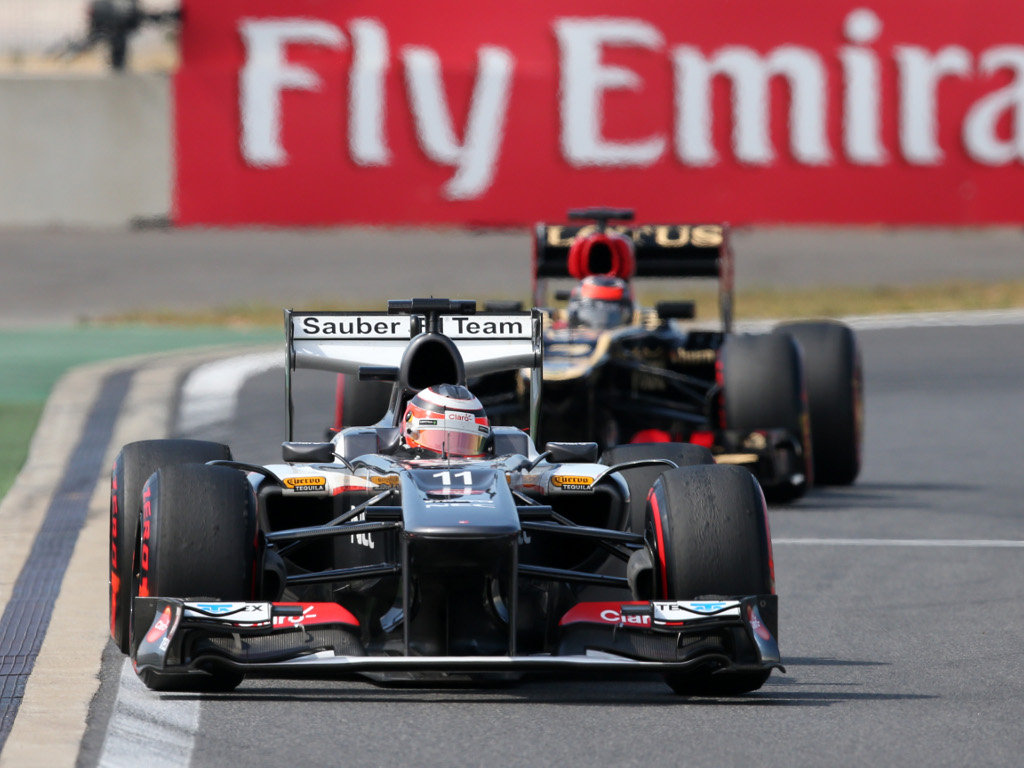 There were top ten places in Saturday’s Korean Grand Prix qualifying for Nico Hulkenberg and Esteban Gutierrez, but Sergio Perez missed out…

Sauber:
Nico Hulkenberg: “Today went really well. Q1 and Q2 were like clockwork and my lap in Q3 was good too, but somehow it was more difficult, I was four tenths down on my Q2 time and the grip was not the same as in the previous session. To start P7 tomorrow is very positive and we can look forward to the race. The car felt good during the long runs yesterday, and I feel confident we are able to hold our position tomorrow. It is so much fun driving here, however, we mustn’t forget the cars in front of us are strong and also we have the McLarens behind us.”

Esteban Gutierrez: “The communication was very good today, a big thank you to the entire team. I’ve improved my qualifying and once you have both cars working on a similar level you can push yourself a lot more. This is the first time I have driven here, so it is great to achieve a result like that. It is now the second time in a row I have been able to put in a good qualifying performance and that is a good feeling, because I have worked a lot to improve. The race will be interesting. The track temperature changed in Q3 and I had a bit of an issue with the balance of the car, and the front grip. Tomorrow will be similar to today, so we need to consider that in order to have a consistent race.”

McLaren:
Sergio Perez: “My fastest lap wasn’t too bad – I had a small lock-up at Turn 15, but I don’t think it cost me too much laptime. So, what we have is pretty much everything that we could have achieved today. We’ve developed a useful set-up for tomorrow afternoon, and we’ve also fitted a seventh gear that’s long enough to hopefully enable us to do some overtaking. That means I’m looking forward to an exciting race. We really need to score some points tomorrow, and I think we’re in a good position to do so.”

Jenson Button: “On my fastest lap, I lost a tenth and a half behind Kimi [Raikkonen] in Turns 11 and 12. It’s quite frustrating: they’re pretty quick corners, and, when you’re that close to the car in front, it damages your lap. It’s difficult – because most of those corners are blind – but we’ve all got radios, so we should all know where other drivers are. It’s a pity: without that delay, I’m pretty sure I would’ve qualified inside the top 10. Still, there are positives for tomorrow – we’ve got new tyres for the race; Turns One, Three and Four are always very interesting on the first lap; and we’ve got interesting straightline-speed compared to our rivals – both in terms of ratios and downforce levels – so the first couple of laps should be really interesting for us. Hopefully, we can go forwards tomorrow.”

Toro Rosso:
Daniel Ricciardo: “I’m definitely not happy with my position and when the gap to the top ten is so small, you have to also be disappointed. I would have liked to have been in the car for the full hour. However, compared to where we were yesterday, we have managed to improve the car, but we have not been able to make enough progress to be more competitive than this. Now we have to look towards the race and maybe the only bright side of not getting into Q3 is that we have one more fresh set of the Supersoft tyres. Hopefully we can make good use of it and then we will see if we have enough pace to go looking for points.”

Jean-Eric Vergne: “Since yesterday, we have struggled to set up the car the way we wanted, but hard work from the team meant that, this afternoon, at least the car was the best it has been so far this weekend. However, as the other teams also make progress, the improvement on our car for this afternoon was not enough to move us up the order. As for the race, we should be able to start each stint on new tyres and that could make some difference. I am usually optimistic, but I think points will be a difficult target tomorrow. I will give it my best shot and see if I can claw my way back up towards the top ten.”

Force India:
Adrian Sutil: “In the end I was very close to making Q3 – just one a half tenths away, so that shows how close things were today. We have been working very hard on the set-up all weekend and I was quite happy with the balance, but my lap was right on the limit. P14 still gives us the possibility to score points tomorrow, just as we did in Singapore. A lot of cars seem to have similar pace so maybe we need to try and do something different with the strategy to try and open us some options in the race.”

Paul di Resta: “The last few races have shown that our low-fuel running is where we are struggling at the moment. We were not fully optimised for qualifying because we’ve been focussing more on our race pace – as we did in Singapore. Hopefully that will pay off for us tomorrow because our long run performance and tyre wear yesterday appeared to be very good. So I think we’ve got a good race car, possibly better than some of the cars around us, and points will be the target. I will be starting on the cleaner side of the grid too, which always makes a big difference here, so if we can get a good launch we can hopefully be in a good position to make the strategy work.”