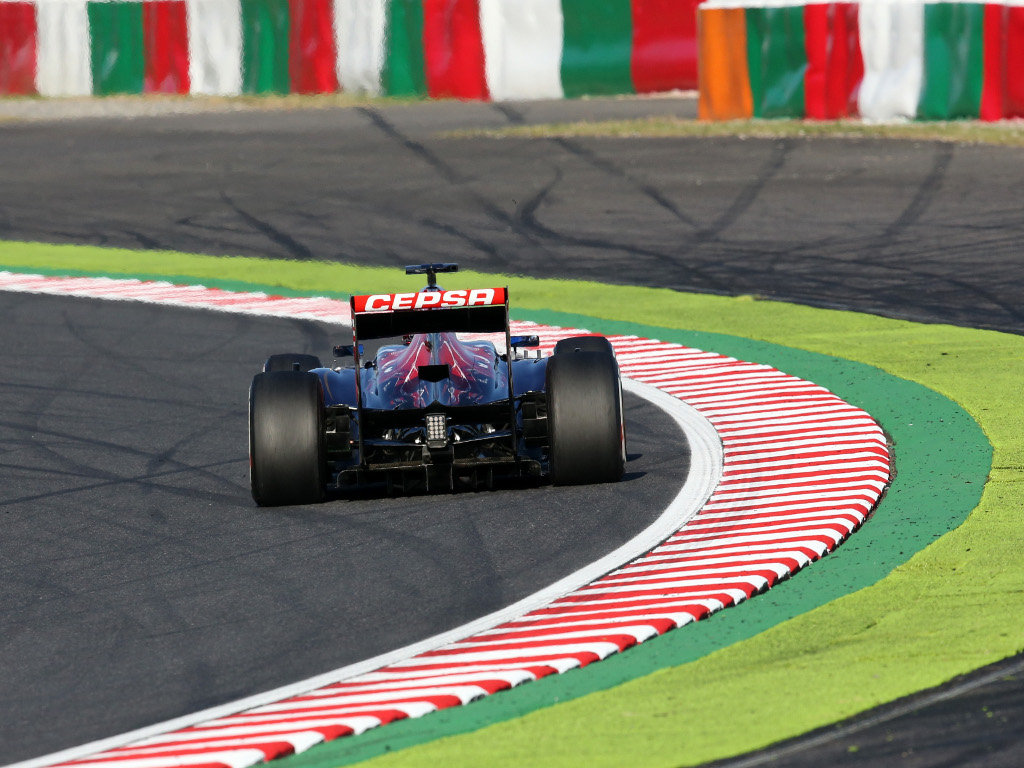 Toro Rosso:
Daniel Ricciardo: “That wasn’t a good session for us, which is disappointing as yesterday was one of the best Fridays we have had in a while. The wind has played a bit of a part today, but we definitely should have been further up than that. I would have liked a better result of course, but we will have to see what we can do in the race. I just wasn’t happy with the balance of the car. Jev’s problem? I heard about it, but from what I’ve been told there’s no reason for me to be concerned about it for the race, as everything was fine on my car.”

Jean-Eric Vergne: “As I was going out of the pits, my engineer was on the radio to me, so I had to wait until the middle of sector 1 before I could tell him something. I thought I had an engine problem, but then I realised the rear brakes were stuck. I tried to brake and there was nothing in the pedal, then I saw the fire and had to stop the car. The team will have a lot of work to do tonight, because it took quite a while for the fire to be out. Hopefully the main components are undamaged, the engine and gearbox, but there will be many things to change. I am fine, apart from getting a bit of fire extinguisher material in my helmet. All this bad luck? I just hope that I have used up all my share of it for next year too. It won’t be an easy race starting from this far back, especially as it is not so easy to overtake at Suzuka.”

Marussia:
Max Chilton: “I’m so happy to have put us ahead of both Caterhams in qualifying for the first time since China. One would have been a result, but to beat both Pic and van der Garde is really incredible and shows just how much fight there is in all of us at this crucial stage in the season. It has not been the most straightforward weekend for us on track and leaving the garage after the red flag, with just under three minutes of the Q1 session, remaining seemed like a tough ask. The track conditions had also shifted in that time and the wind made things more difficult in sector one for sure. I gave it all I had and my lap was as good as I could have asked of myself. I’m just really looking forward to my first Japanese Grand Prix at Suzuka and I hope we can carry the momentum through into the race tomorrow. Well done to all of us in the Team.”

Jules Bianchi: “It’s a really good achievement for the Team to have got the car back to a stage where we are capable of outclassing the Caterhams on merit, so this is positive news for the remaining races. As for here, it has been a bit of a struggle since FP1 and with only 33 laps over the weekend so far – most of them from this morning – we haven’t had the opportunity to get back to where we started out so well on Friday morning, plus we have had to focus mainly on the race. Qualifying did not work out so well for me. We had planned to do just one option run but because of the red flag my quick lap was on scrubbed rather than new options. The race will be hard as well because there is a big job to do from the back row. On a positive, the Team have done a fantastic job with building up the car and enabling me to get so close to van der Garde in such a small space of time and this is an achievement in itself. I hope to build on that tomorrow and have a better race.”

Caterham:
Charles Pic: “FP3 started with a car that was better balanced from Friday, especially in sector one. However, the traction wasn’t as good but to avoid compromising the aero balance we’d found we worked on the diff and brake balance for run two and it made a small improvement. We stuck to the normal plan and did a second run on the primes and then onto the options, with a bit more front wing for the performance run but I couldn’t feel a big gain in grip on the mediums today, unlike Friday. The car was understeering more, particularly in the high speed sections so we made another couple of changes before quali to deal with that. On my first run in qualifying we went out on mediums for three timed laps and the car immediately felt better. We’d made some more changes over lunch and the balance had improved a lot. Run one was OK but with more time to come we opted for a second one lap run at the end of the session. Just as we exited the pit the red flags came out so we came straight back, but had enough time for one more lap. Unfortunately, with the time left in the session when it restarted, we didn’t have enough of a gap on track so even though I was four tenths up on the last quick lap, I came up behind another car and couldn’t improve my time which is obviously a shame.”

Giedo van der Garde: “We started FP3 with a pretty good balance. I was struggling a bit with entry into Turns 11 and 16 and there was a bit of understeer as the tyre wear increased, but not too much to be a concern. For the performance run we made a final change to the ride height and front wing to try and improve the car’s behaviour on entry and it seemed to work a bit. The car balance had improved but we still needed to improve its behaviour in entry to the corners in the low speed turns, so we did that over lunch in preparation for Q1. We started quali with a three timed lap run on the medium tyres and I couldn’t really find any real pace. The track was very busy and there wasn’t much clear space, but the car had been quickest on the first lap so we went for one timed lap on run two. Just when I went out the red flags came out at the same time so I had to come back in and that meant we were always going to struggle to get the best out of the tyres when the session was restarted. As soon as it began again we went straight out but the tyres had gone so I couldn’t get everything out of it. Still, there’s a few penalties which will mean we’ll begin the race higher up and with another start tomorrow like I’ve had recently I’m sure we can be back where we want to be on race day.”