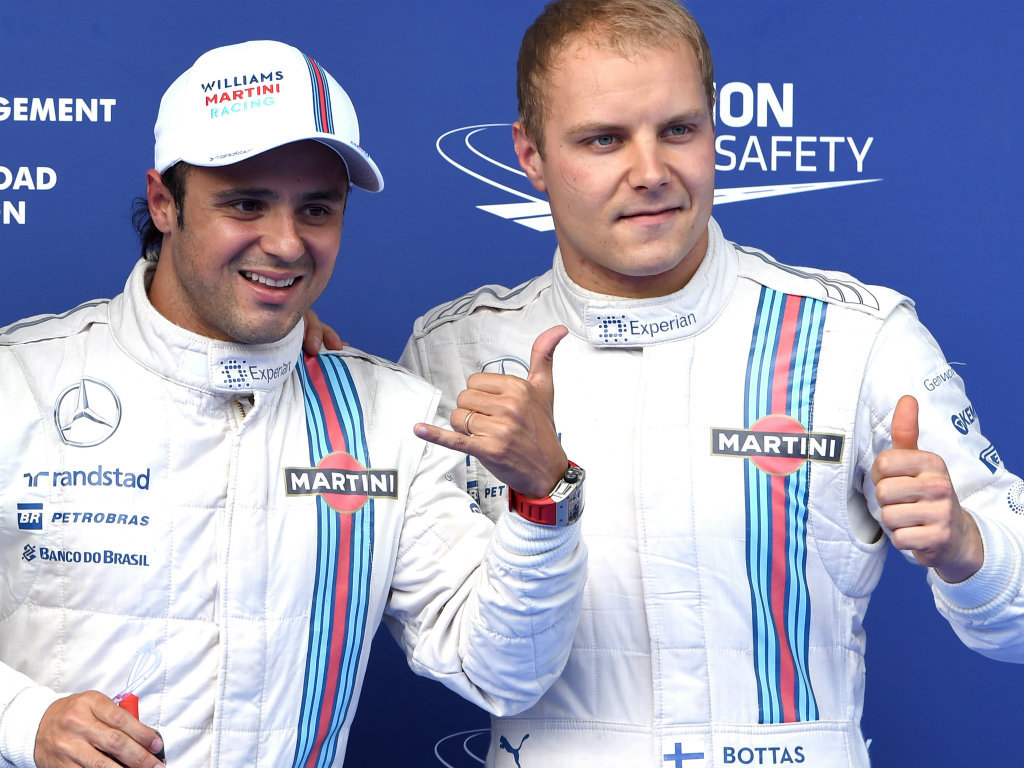 Felipe Massa secured his first pole position since 2008 as he edged team-mate Valtteri Bottas in qualifying in Austria. Nico Rosberg was third…

Williams:
Felipe Massa: “It’s an incredible moment for me, but the whole team is feeling this too. The team has a great history and we continue to build on that. It’s a special day. I had some traffic earlier in the session but when it counted I did the best I could. There is a lot to do tomorrow and we have a very strong Mercedes behind us. Today is a day I won’t forget though and it’s the first time my son has seen me get pole so emotions are high.”

Valtteri Bottas: “I am really happy for us as a team as it is such a good result. It couldn’t have been a better Saturday for us. I would have liked to have been on pole, but Felipe had the better lap when it mattered. Tomorrow isn’t going to be easy as the Mercedes are still the quickest car. I pushed a bit too hard on my final lap at Turn Six, but I was already down on my quickest. Tomorrow the strategy will be important and so we have to be clever with what we do. We are in a better position than the Ferraris and the Red Bull so it should be really good fun.”

Mercedes:
Nico Rosberg: “That was not a great qualifying for us. I didn’t get the second quick lap in Q3 when Lewis spun in front of me at Turn 2 and I had to slow down for the yellow flags. For sure, from our point of view it makes life harder that the Williams are starting in front of us and I must say well done to them – they have been quick all weekend and took their opportunity today. But I am still feeling confident for tomorrow. We have worked hard to find the best set-up for the race – my balance wasn’t perfect in qualifying, with a bit too much understeer, but I hope it will settle down tomorrow. This track has a few good opportunities for overtaking and I think it’s going to be a very interesting race.”

Lewis Hamilton: “I just didn’t finish a lap in Q3 today – sometimes you get it all together, sometimes you don’t and today I didn’t get the job done. The feeling in the car has been good all weekend and I think we had the pace. My first lap in Q3 was looking good before I went wide in the second-to-last corner, and I think that lap would probably have done it. Then on the second run, I hit the brakes into Turn 2 and just locked the rears; I still need to look at the data to see exactly what happened. It’s a long race and I need to try and recover as much as I can from this loss. The shot for the win will be very hard so I guess it’s mainly a case of damage limitation; I will be doing all I can to put myself in a strong position and to get good points for the team. Congratulations to Williams as well; I’m very happy for Felipe and his pole position.”

Ferrari:
Fernando Alonso: “I have mixed feelings after this qualifying, because on the one hand, this is the best result since early in the season, but it’s also true that the session was very unusual and it’s highly likely that the final order does not reflect the true hierarchy down the field. In Q2, I made a mistake at the final corner, which meant I had to try another run and in Q3, I went long in turn 3. But fourth place makes up for the disappointment of not having done a perfect lap and it should make us proud of what we have accomplished so far, because the updates we started bringing since Canada seem to indicate we are on the right road. With some faster cars behind us, we can expect a difficult race, in which defending will be as important as attacking. Now we must try and work out how to make the most of this advantage for as long as possible in terms of strategy and to have a solid race.”

Kimi Raikkonen: “In these two days I have found it more difficult to put together a good lap and again today in qualifying things did not go well. In Q3, I went out for just a single run on the Supersofts, but the mistakes made at the first corner affected my lap times. On my last run I locked the wheels, damaging the left front tyre, but at that point, I decided to keep on trying to improve. Even if eighth place is not a disaster, I am disappointed because we were quicker than that today, but I was never able to be consistent in the three sectors. Race pace is good and even if I am finding it a bit hard to get the tyres up to temperature, I will try my best tomorrow.”

Red Bull:
Daniel Ricciardo: “It was tough out there. It’s been tough all weekend to be honest and it’s felt like we’ve had to squeeze everything out of the car to get into the top 5, which we just managed to do today. All weekend we’ve been on the back foot and I think respect to the other teams, they managed to get their cars dialled in well for this weekend and we’ve just got to keep pushing. Fifth was the best we could have done in that session today.”

Sebastian Vettel: “There were no real problems today, other than that we weren’t quick enough. Daniel was quicker in Turn 5 and has been quicker in Turn 2 all weekend. We’ll see how it goes for the race; it should be hotter tomorrow and hopefully we can make a big step and take on some of the other cars.”