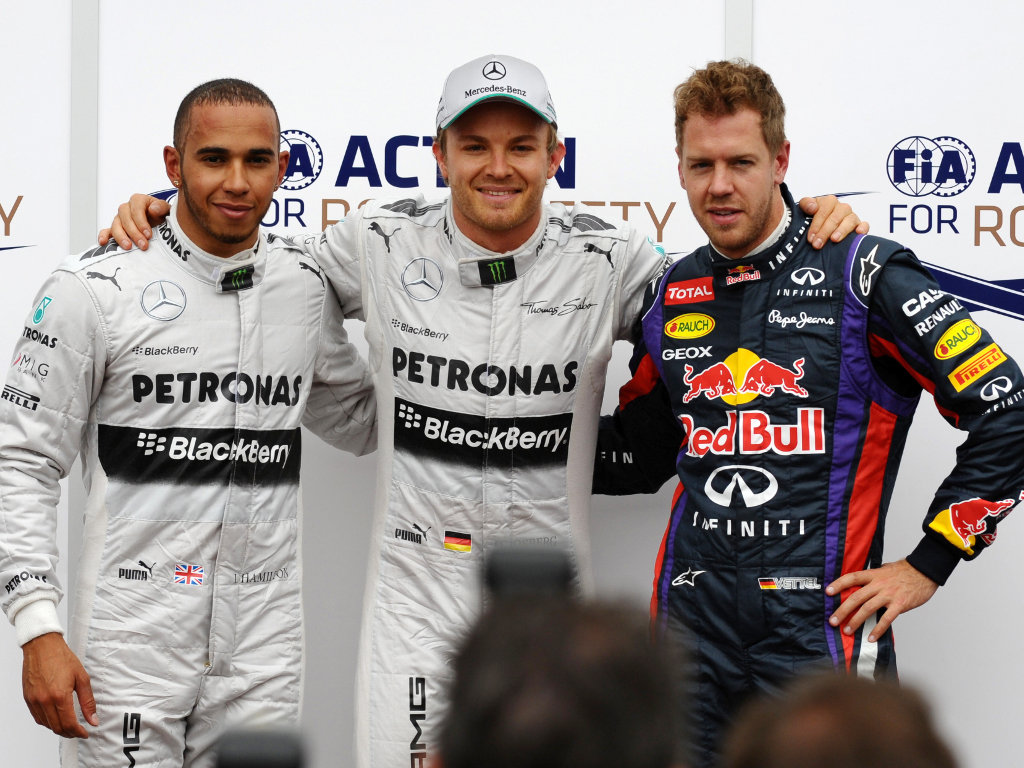 Q. Nico, I guess in some ways the result that many people had expected – but it was not straightforward in the way it was achieved today, given the conditions.

Nico ROSBERG: Oh, definitely, yeah! It could have been a lot easier out there today. The conditions were all over the place and as soon as it started drizzling again the lap times became a lot slower, even on the Inters. So it was really difficult and changing so much, y’know? So you really have to be out there at the right time with the right tyres, especially in Q2, changing over to slicks – but I’m really happy. Everything went to plan and the last lap was OK. It’s great to be on pole again, especially in Monaco. If at any track then it’s this track where it makes a difference.

Q. Lewis, you held provisional pole position for a matter of a few seconds…

LH: I didn’t, definitely not. I’ve been struggling all weekend as you can see, my pace was sucking all weekend and just struggling with the car if I’m honest. It’s the first time I’ve ever had that experience here in Monaco, since 2005, every year, I was on it and didn’t have any problems with confidence or anything like that – but this weekend has been difficult. So I’m really happy to be here, be able to lock-out, obviously, the front row for the team and just massive improvement for me, considering all the sessions in qualifying – so I’m still chuffed.

Q. Sebastian, you were fastest in Q2 but when push came to shove at the very end, were you just missing that final little bit, do you think?

Sebastian VETTEL: Yeah, I think it was very close. Mercedes was very quick all weekend, we know they are very quick on one lap. But I don’t want that to sound like an excuse. I think it was a bit more than a tenth missing and I think I had that today but it didn’t come together on the last lap. Really, if anyone’s to blame… I think the car was very, very good and if anyone’s to blame then it’s me. So, not entirely happy .with the last lap but quite happy that there isn’t a Ferrari or a Lotus ahead. Tomorrow I think these guys will have to stop at least as much as us – yeah therefore I think sitting in third is still a good result and should be a good opportunity tomorrow to win the race.

Q. Back to you Nico, it’s 30 years since your father Keke won this grand prix, 30 years to the year You’re bidding to become the first son of a former winner to win the Monaco Grand Prix. Your thoughts on tomorrow’s grand prix.

NR: Well, it’s always nice to hear these statistics but… yeah, it’s nice but it doesn’t really change much for tomorrow. Just very happy starting first. And you know, in Barcelona we were still struggling a lot in the race. I was 70 seconds behind at the end of the race from the race winner. We’re improving, it’s difficult to understand the tyres and get the most out of it. We’re improving step by step – but there’s still a lot of question marks remaining. And so here, yeah, I’m sure we’ve made a step forward but it’s still going to be difficult for us tomorrow, definitely. It’s still our weakness but we’ll make the best of it and, who knows? You can always have a few surprises.

Q. Obviously Nico it’s an all-German final this evening in the Champions’ League, you’ve stuck the car on pole position so a fair bit to shout about there – but there was one moment in Q1 at Mirabeau where you appeared to be about to go straight on – so quite a close moment. Did you have your heart in your mouth at that moment?

NR: Two moments actually! I did exactly the same thing twice. I was just surprised by the lack of grip going into there and then I didn’t really want to accept the next time around that I had to take so much speed out, and so I went straight again. But anyway, it was the beginning of the session, it was drying out so I knew that there was plenty of time to set a time later on. But of course those moments are not great. Prefer staying on track.

Q. Lewis, I guess it’s moments like that where you guys really show what you can do, finding grip levels. At no point in the weekend have we had any wet-running and you had to go out there and find the limit almost immediately. Can you just put into words how you do that and what it feels like, what you’re getting back through the car?

LH: That’s not an easy question to answer. It’s just down to feel and we all have… that’s the skill that we have, to feel the grip when it’s unknown and that’s really one of the most exciting things about this session: you never knew where the grip was. You’d arrive in a corner: sometimes you’ve overdone it; sometimes you’ve undershot. And like Nico said, it’s surprising how little grip there was in some places. And that’s what makes the session so exciting. And like I said, I’m just happy. Congratulations to Nico, he did a great job today – but I’m really happy I could be up here with him.

Q. Sebastian, your thoughts on that – and also on what we saw on Thursday from Red Bull in terms of long-run performance. Obviously we know what’s happened the last few races with Mercedes after strong qualifying but this is a very different kind of race track in terms of tyre wear, isn’t it?

SV: Yeah, I think we will have to wait until tomorrow really to be precise – but I think we had an idea on Thursday. Our performance on Thursday – my performance on Thursday was not great. I wasn’t feeling the car and therefore today I was much, much happier. We improved the car a lot so having that extra day yesterday I think helped us. Right from the start this morning the car was much more to my liking. I felt much more confident, got into the rhythm nicer which is the most important around here. If you don’t feel comfortable then you just don’t dare to go faster. So I was very happy with the car and I’m, I think, very confident for tomorrow. Long run pace looked already good on Thursday so I expect it to be again a bit again a stronger on Friday [Sunday]. I think we’re pretty much average in terms of tyre wear, so yeah, the last couple of races Mercedes was worst in that regard but Monaco is a different track. A little bit different what we can expect tomorrow, so I think we still have a great chance from P3, hoping for a good start and then getting into the race nicely, doing the right calls at the right time and hopefully come out ahead. That’s the plan. But surely those guys have something against that. But yeah, our target tomorrow is to win.