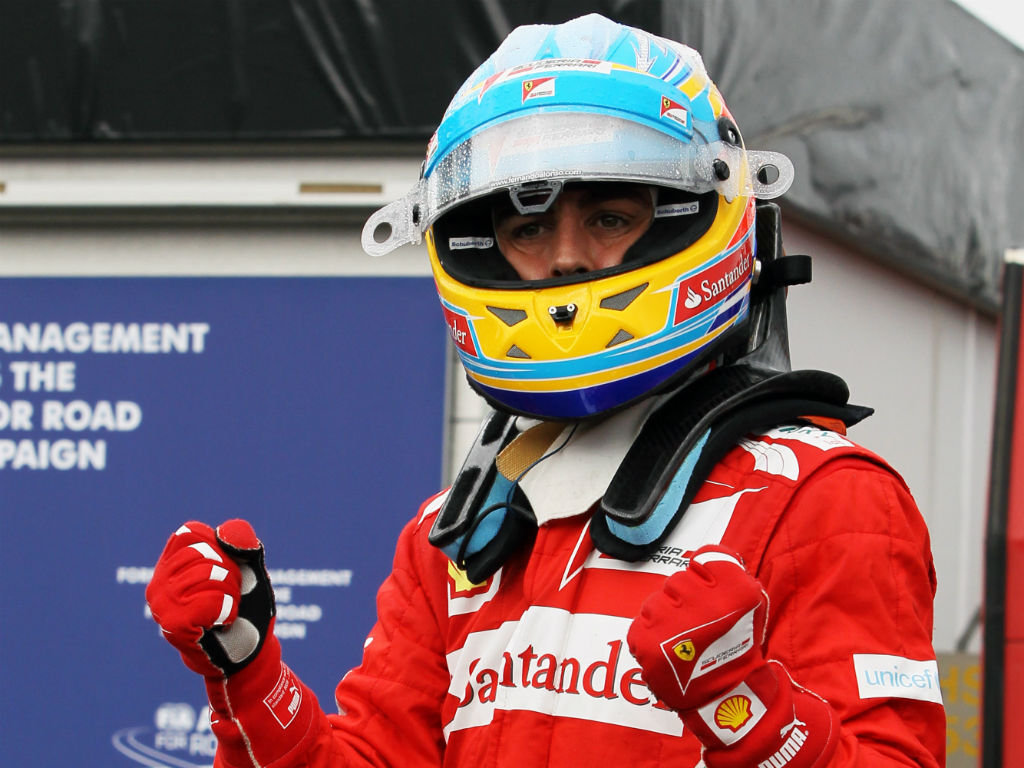 Q: Well Fernando, give us some idea what it was like to be out there: fun? Difficult? Incredibly difficult?
Fernando ALONSO: Not fun, that’s for sure. I think the problem is that you don’t know the conditions. It was similar in Silverstone. You wait five, seven minutes in the garage and then you have completely different grip and completely different standing water in places that you don’t expect. So in the out-laps you try to memorise a little bit where the water is and how much to push, to feel a little bit with the car the grip. Then you start opening the lap you go surprise after surprise with the car, having moments everywhere, especially with aquaplaning into Turn Six. So, it was not easy qualifying for anybody, and at the end it was a good result but, as you ask, it was not fun for sure.

Q: But hugely satisfying, presumably, to be on pole?
FA: Yeah, very. I think when you have this type of conditions it’s very difficult to put a clean lap together and it’s very easy to finish in the gravel or to finish in the grass, the wall or whatever. So, those type of conditions are a little bit of a survival moment, that you need to finish the qualifying and see afterwards what position you get. You try to complete the lap, to avoid any problem, and then whatever the position is, you are happy, because you know you were at the maximum, or you felt that you were at the maximum. So when they tell you, you are on pole, it’s obviously a very happy moment. But the race is tomorrow, today was good but we need to concentrate for tomorrow and also look at the sky – because the weather has been so changeable at the moment – yesterday and today – and tomorrow we need to be ready for anything.

Q: There was a bit of a worrying Ferrari moment in Q2 there.
FA: It was close. It started raining at the beginning of Q2 and we all wanted to set a time at the beginning of the session because we expected more rain to come. The first or second lap we knew was the best moment to set a time. So we were all in a group. Felipe had a moment in Turn Six and then in Turn Eight and we were very close but it was fine in the end.

Q: Sebastian, does July look a little bit better now?
Sebastian VETTEL: I think it can’t be that bad, I was born in July, so… I said it on Thursday and nothing has changed. I think it was an interesting session, and as Fernando said, things can go completely the other way from what you expect. So, I was not entirely happy with the lap I had in the end when conditions were best. Potentially the strategy Fernando had in the end was a little bit quicker – but nevertheless I think I could have gone a little bit quicker. Whether it would have been quick enough, we’ll never know. I will see what we can get tomorrow.

Q: There was obviously somebody ahead of him…
SV: Well, I think the thing is, if you are too close to someone in these conditions you can’t see nothing. I was catching up Mark and in the mirrors obviously you can’t see nothing, so I guess he couldn’t see me. I don’t think he had intention to hold me up. Obviously I lost two laps because of that. But, as I said, the fastest was still the last one. And then if you keep catching someone up, even if he’s still three, four, five seconds down the road, you go on the straight, the spray comes up, you see nothing, you don’t see the rivers and all of a sudden you are sideways. The car is in seventh gear, 280kph and it’s a surprise. So yeah, it’s on the limit but obviously you have to do your best under these conditions, everyone else is pushing as well, so no choice.

Q: How do you feel about the car in the dry, which we hope it will be tomorrow?
SV: I think it should be dry. Obviously I grew up more or less here in the area. I’m surprised it’s that bad actually, in July, because July is always a nice month weather-wise. Yeah, so, I hope for a good race tomorrow, looking forward. I think the car is not bad if we get in the right window – so we need to see what we’ve done this morning and qualifying. Obviously with the conditions changing so much you never find consistency and you can’t really test one thing against another. But I think the speed is there, we just need to find out how the car works best. Obviously now we can’t change anything but I think the changes we’ve made should be a step forward, especially in the dry.

Q: Mark, your best qualifying position here, things look a little bit better for you. It hasn’t always been lucky, as we mentioned the other day.
Mark WEBBER: Yeah, as the other guys have touched on, it was an intense, tricky session for drivers, engineers, decisions. Yeah, it was a challenge for us. I think in Q3, definitely to arrive on the straight in seventh gear was sometimes not possible. To use the KERS wasn’t possible, there was extremely heavy aquaplaning, so when the cars are having wheelspin at 280ks it certainly gets your attention. So we had to juggle a few balls, and make sure we arrived at the end of each lap in reasonable shape. It was becoming obvious that the times were going to be done at the end but I think there was a few people out there with tyres not in the best shape at the end, so Fernando’s strategy looked pretty good. But in the end I was happy with my lap; happy to be up there again. Yeah, would have liked to have been on the front row. Obviously every position I gained was better against the penalty that I have for the gearbox – but eighth is still OK here, we can race from there.

Q: What are you hoping for tomorrow, a podium at least?
MW: A win. No. Well, y’know. We’ve got to aim to come forward, I mean that’s what we’ve got to do. It’s not the best position to start the grand prix, that’s clear. To start eighth is not ideal but we have to aim to come forward and let’s see what happens at the front, let’s see how the race goes. We’ve had limited running in the dry, there’s been snapshots of information for the teams to get some information. I’m positive going into the race and will try to pick some people off over the course of the grand prix.

Q: (Adrian Huber – EFE) Fernando, you’ve had massive performance on dry tyres, on wet, extreme wet; are you happy also with the direction that the car is developing? And the next question is, would you be happy with a podium tomorrow or are you aiming for your 30th victory?

FA: Yeah, the car is performing well in all conditions this weekend, which didn’t always happen: we were quick on inters and not extreme and vice versa, sometimes good on wets and not so competitive on