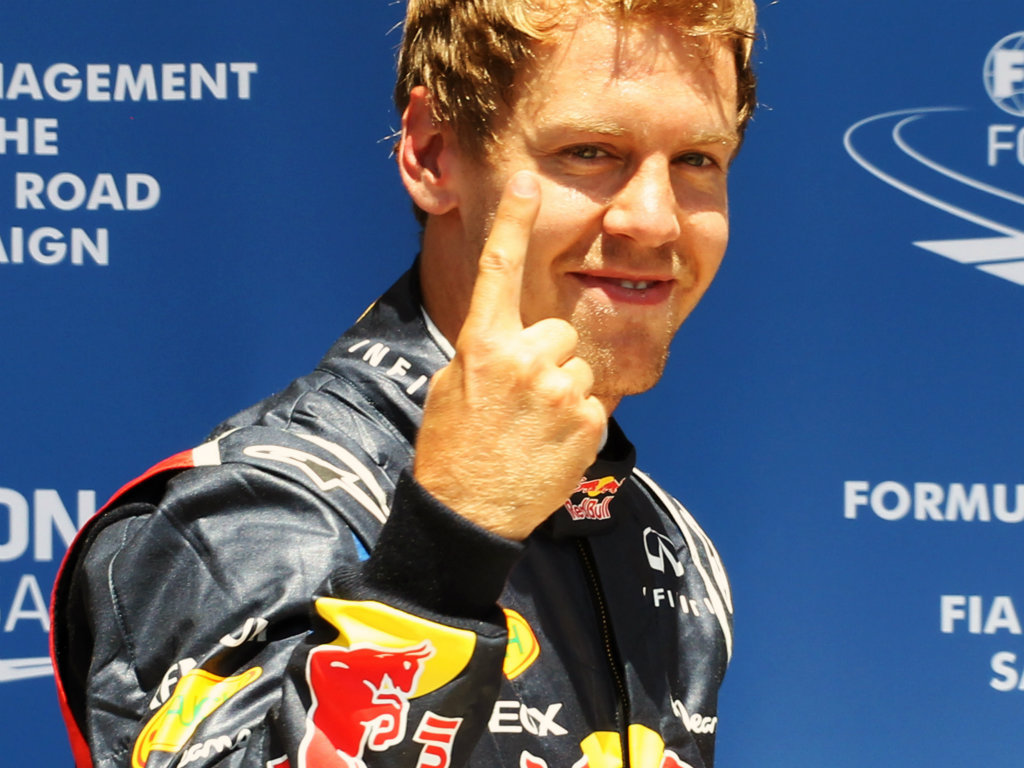 Q: Congratulations Sebastian, a third pole in a row at this race and only one flying lap in Q3 to try to do it.
Sebastian VETTEL: Yeah, one shot there in the end, which turned out to turned out to be a very good lap. Q1 and Q2 were not to our liking. We were struggling to find the balance we did have early on this weekend, yesterday and this morning during practice. Yeah, good recovery throughout qualifying. Unfortunately, we had to put a second set of options in Q2. It was the right call because it was very tight. I think my time would not have been good enough, I set with the first set. So it was good to go again. But then in the last qualifying I knew that going at the end if the track comes in a little bit more and tying the lap together it should be good enough maybe to look at pole. In the end it was a surprising gap but all in all I felt very well this weekend. The boys have been working incredibly hard in the garage, all the people in the factory as well to make sure that we bring a couple of new parts to the car. They seem to work and I’m looking forward to the race tomorrow.

Q: Lewis, a front row for you. Sebastian says it was a surprising gap at the end. Did you expect it to be much closer in Q3?
Lewis HAMILTON: To be honest, I expected to be a lot further back. We’ve struggled all weekend, just with set-up and you know going from P3 to qualifying we had to make some guesses as to what kind of set-up we wanted to change. It seemed to work OK and I’m really, really surprised. The guys obviously did a great job, as always, to get me a good gap and while the car still felt pretty good, I think the gap is still pretty big here and it will be a tough race tomorrow for sure, as always.

Q: Is that just the way it is in 2012 then? You go from winning one race weekend and on the next one you struggle and you’re not quite sure where you are?

LH: I think so. At least it appeared so when we first started practicing here yesterday. But generally, I think, you look at the grid, because it’s so hot, the Lotus cars look massively competitive. I think they’re going to be the ones to watch out for tomorrow. I’m sure the Ferraris will be very quick on their long runs as well. Who knows what’s going to happen tomorrow, we just have to look after our tyres in these tricky conditions.

Q: Yes, 2012 is unpredictable, but Pastor, one is for certain, you quite like Spain don’t you?
Pastor MALDONADO: I think we’ve been working so hard. The car has been quite quick from yesterday. We were struggling a bit with the option tyres. We were confused because I didn’t feel the same feeling with the prime tyres but then we’ve working so hard trying to understand what was happening with the car this morning, still struggling, especially with the option tyres. But for quali we understand a little bit the way, and here we are. I think we did a pretty good job. Williams is getting better and better every time. I’m pretty happy for the team, pretty happy for my country and it’s going to be a great opportunity to get on the podium and fight for a good result.

Q: You did, though, use seven sets of tyres during the course of that qualifying hour. How much of a disadvantage does that put you at for tomorrow’s race?

PM: I think for the long run, for us, the prime tyres were a bit better. We had more range and they were even quicker after a couple of laps. We have tyres enough to race and get very competitive. I’m not worried about that. I’m looking forward to tomorrow. We’ll see from the start what happens with the strategy, that will be very important, essential for tomorrow. These conditions are very hot and very difficult for everybody. So looking forward, let’s see.

Q: Finally, back to you Sebastian. Lewis has outlined some of the potential battles for tomorrow’s race. Where do you see the big threat coming from, or have you, by saving a set of tyres, ensured that you’ll make it a hat-trick of victories as well?

SV: Well, it would be nice, no doubt. I think it’s going to be a difficult race. Difficult to predict. We have seen too much this year to be honest to sit here on Saturday afternoon and predict what’s going to happen. I think it’s probably easier to guess the result tonight in football than tomorrow. It’s less hard than predicting the ranking tomorrow. I think it’s going to be tough, as Pastor touched on. It’s going to be hot tomorrow – a bit hotter than today even. So yeah, there will be obviously a lot of cars to look out for tomorrow. I think Ferrari has been very competitive. Williams have been quick yesterday on their long runs. Lotus, I think they’ve proven in Bahrain, the first time we had hot conditions, that they’re up there. So, I think this year obviously grid position is important but maybe not a

SV: Well it does, so it would be nice, I think… I’m very happy to be here now because, to be honest, we had a very good weekend. Yesterday was very good, I felt comfortable in the car, this morning I felt very good, even though we didn’t get to finish the run on the soft tyre but this afternoon we started and I think we were a little bit off, compared to where we were the whole weekend. And we played a little bit of catch-up through Q1 and Q2: you don’t have that many runs. And we had to go out again in Q2. It was very tight. We saw I think Fernando was just not quick enough for Q3 and I think I was a little bit slower than that, so if we could have stayed in the garage then, yeah, we would not be here now – so it was a good call from the guys on the pitwall, and yeah, obviously we knew then we only had one set of options left, and tried to give it the best shot in the end. I knew that if I get the lap together, plus whatever we tried in qualifying with the car… I mean you can’t really do much, you can’t really change the setup but you can play a little bit with the settings you have inside the car: differential, front wing, and yeah, I think we caught up. And I had a good feeling in the last lap and managed to put everything together in the three sectors – which was good enough for pole. So, I’m very happy, especially after the effort that has gone in, as I touched on, from the guys here but also from the guys in the factory. We’ve got a couple of new bits here, they seem to be a step forward, which is very good.

SV: Well it depends. We’ve tried a lot, we’ve been pushing very hard, to be honest. I think it’s difficult this year. I think we see everyone is