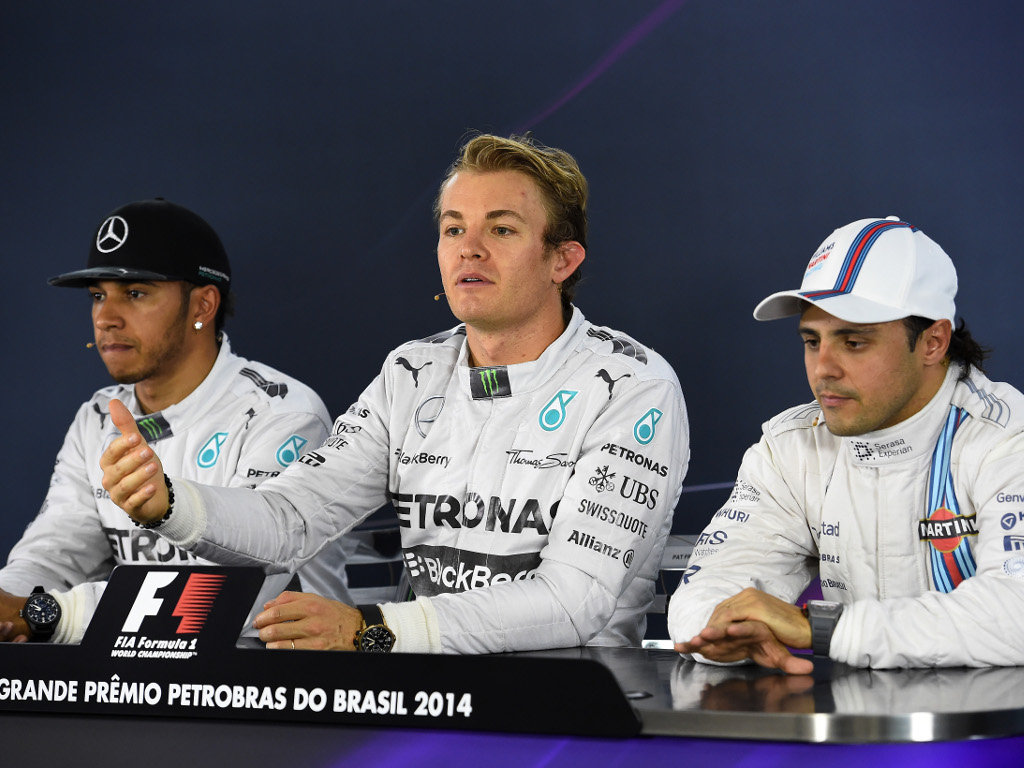 Nico ROSBERG: Perfect job only if it works out tomorrow, you know, unfortunately. Up to now, of course, it’s been going well and it’s the best place to be in tomorrow but of course I need to make it happen in the race, unlike Austin for example.

Q: Well, very well done. Lewis, a very small margin in the end, a matter of a few hundredths of a second. It looks like you’ve been chasing Nico a little bit all weekend but it seemed to come together; a little mistake possibly in Turn 10 on that final run, but how important for you is it to win tomorrow’s race, how important to just collect points?

Lewis HAMILTON: Just to comment on qualifying: it was great fun, Nico did a great lap and I lost a little bit of time in Turn 10 and perhaps a tiny bit in Turn One. But it was great – just having to keep on going out and fighting. That’s what qualifying is all about and it should always be that kind of gap, that close. So, really exciting and I hope people enjoyed that. And then, of course pole position is the best place to start here but it’s a long race tomorrow. It should be quite exciting with all the pit stops and the weather we don’t really know, so I’m here, I want to win, just as much as anyone else here, so I’m going to work as hard as I can tomorrow and hope we get have a race at least.

Q: Very well done and coming to you Felipe: third place for you and tremendously well received by the Brazilian crowd here. Emotional for you?

Felipe MASSA: Yeah, very emotional. Very emotional to be here in Brazil and to have a competitive car, to start in the top three. I didn’t use everything I could from the car because I just got a lot of traffic, a lot of problems on my last set, that my car wasn’t… we couldn’t leave the engine on, so it was a lot of problems to leave the garage, so I left in the last moment with a lot of traffic around, with Magnussen. So I couldn’t improve my lap time and everybody was improving a little bit on the second set and I was not going to improve maybe enough to beat them but maybe to get very close. So it was very tight between the team-mates. It was very tight between them and very tight between me and Valtteri. But I think that’s a good thing. I’m so happy and I hope that it’s just the beginning and the start for tomorrow, a good result for us as well.

Q: Very well done. Back to you Nico: the points situation obviously means you need to win both the last two races…

Q: Well, possibly, shall we say! You’ve been very calm all weekend. I wonder if the pressure is different now you’re in the position you’re in, compared with earlier in the season?

NR: Pressure: it’s pretty much similar. The adrenaline is there, the tension, the excitement, it’s not been changing that much. I’m just here; I’m going for it. I’m pushing myself to stay optimistic all the time. Naturally I am optimistic also. Learn from Austin; I know what I need to do better. So, from that point of view, good to go for tomorrow.

Q: Nico, as we said before, perfect run up to now. Tomorrow is what counts and, of course, this is a particularly tricky first corner, isn’t it? I guess it’s not ideal to have your team-mate alongside you because an awful lot can go wrong in that first Senna S, can’t it? Talk us through your thoughts.

NR: I’m sure the start is going to be great to watch but being on the clean side of the grid, and it’s not such a long run down to Turn One, so that should definitely be helpful.

Q: Lewis, your perspective on Turn One as an opportunity for you to get back on terms, and also whether what happened here six years ago, winning your title here, whether you’re going to be able to channel that into your performance tomorrow.

LH: I’ve not really thought too much about the past here but, as I said, I’m here to win. Going to try to get off the line as quick as possible tomorrow and if I have a shot into Turn One tomorrow, I’ll take it. Otherwise, it’s a long race, 71 laps here so there’s lots of… should be several, two or three stops, so lots can go on during the race. So I’m generally excited and it’s not the only opportunity off the start. Yeah, we just, as I’ve said at all races, I just hope that we can race at least.

Q: Felipe, obviously that’s your best qualifying since Germany – but particularly exciting for you, I guess, is the margin. How close you were to these Mercedes around this track. Your thought on that and also on what you can do in the race. Can you challenge them?

FM: Yeah. Definitely good qualifying today, very tight between us in our team, me and Valtteri. Nico and Lewis as well. They were very, very close to each other so it was not an easy qualifying. I managed to do a good lap straight away but I just had a problem on the second set. Traffic, problem with the engine that it was not firing up. The car is good. I would say the car is competitive and we need to understand how the tyres will behave tomorrow in the race. The weather as well – but I think… I will try everything I can for my best race. I really hope that it can be possible to have some opportunity, even with these two guys. I will try.

Q: (Livio Oricchio – Universo Online) Nico, this weekend looks a lot like the Austin weekend. But after your pit stop (in Austin) you suddenly lost performance and Lewis overtook you. What happened exactly and do you think the story will be different here?

NR: You say this looks similar to Austin. I don’t know why. Just pole position. I understand what I needed to improve in Austin: I didn’t find my rhythm in the race and I understand that, we looked at it and so I’m confident that I can improve that for tomorrow. Anyways, it’s a different situation: different track, here we’ve done more long runs, we even did a long run this morning which will help, in exactly the same conditions as we expect tomorrow. So all those things should be very helpful.

Q: (Livio Oricchio – Universo Online) Lewis, would second place already be a good result for you here, even with Nico winning the race? Will you be more conservative or will you go for it, trying to get your sixth victory in a row?

LH: I’m just repeating again: I’ve come here to win so the priority target as always to try and win the race. Of course, on top of that, I want the team to have another one-two which is going to be our target. We know the Williams are very close. Hopefully we’ll have a good battle tomorrow.

Q: (Paolo Ianieri – La Gazzetta dello Sport) Felipe, we have seen a Williams which is very very fast in the last sector. Do you think that tomorrow you could have the chance to beat Mercedes if you can manage to stay close to them at the beginning of the race?

FM: I think we were very fast last sector but even also in the first sector. We were just losing in the second sector which is where you need more downforce, and it’s pretty clear what we’re missing a little bit during the championship but it’s also true that we have a good car. We have a competitive car and I don’t know if we will have the chance to be more competitive than Mercedes tomorrow but I hope we will have the chance to be in front of at least one of these guys and I will do everything I can. We know that this race is very important for us and for me, as a Brazilian, and therefore these people as well who are watching and supporting me, so I will try everything I can.

Q: (Michael Schmidt – Auto, Motor und Sport) Nico, you mentioned the wrong settings; did that happen by accident or didn’t you know or did you find out during driving that other settings would have been better?

NR: No, it was not by accident. It’s a progression, from one run to the next and you learn, with every run. But then the decision is, OK, I know my settings are wrong but if I change them now, the car will be different and that can be quite risky because in qualifying I’m really going flat out on the absolute edge and when I’m on the edge and the car is different, it’s not necessarily going to be quicker and it’s more risky so I just took the decision to stay as it was and that was the right decision, so that worked out well.