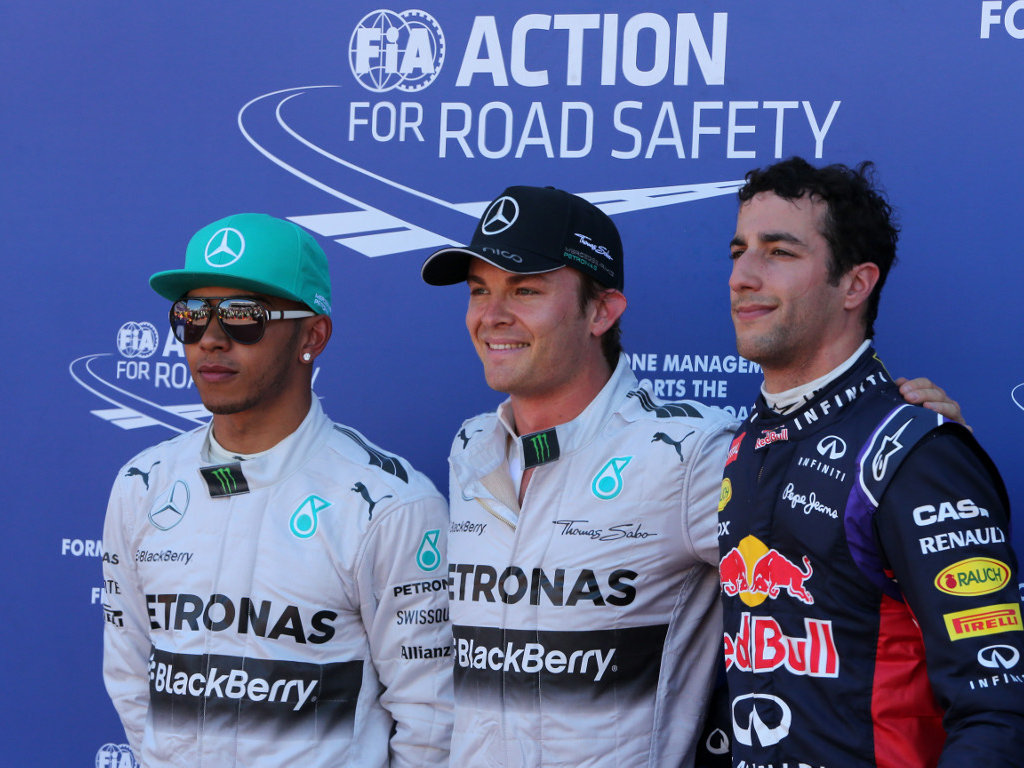 Nico Rosberg, Lewis Hamilton and Daniel Ricciardo made for a joy-less press conference in Monaco…

Q: Nico, congratulations – pole for the second year in a row but perhaps not exactly the way you wanted to achieve it, with that mistake at the end?

Nico ROSBERG: No, definitely not. I thought it was over once that happened, because I thought the track would ramp up and somebody else could beat the time but no, of course, in the end I’m really, really happy that it worked out in the end. To be on pole is fantastic, at home; couldn’t be better.

Q: Coming to you Lewis. Nico’s mistake, ironically, and the subsequent yellow flags meant that you couldn’t improve on your lap. Your feelings?

Lewis HAMILTON: Yeah, it is ironic. But it’s OK. I was up a couple tenths so it’s OK.

Q: Daniel, coming to you, your best Monaco qualifying performance. Your chances for the race, your thoughts on the two gentlemen [beside you] who again seemed to find a bit more speed when it mattered today?

Daniel RICCIARDO: Yeah, I think all three of us don’t seem to be too pleased with ourselves. I think we left a bit on the table. We fought the car pretty hard in qualifying and trying to find a bit more from it. I thought I was getting around it OK but coming up to Turn 8 I just lost the rear completely on exit and pretty much the lap was gone after that. Frustrated, I think we could have been much closer. So a little bit disappointed.

Q: Nico, your thoughts on what happened with Lewis and where your mistake left him. You’re close friends, you’re fighting for race wins, your fighting for pole, for world championships but there’s no question that your mistake disadvantaged him

NR: No, definitely, of course I’m sorry for Lewis. I didn’t know exactly where he was but once I was reversing I did see he was coming up. Of course that’s not great, but that’s the way it is.

Q: Lewis, your response to that? When you’re last on the track there’s always that risk isn’t there, you’re vulnerable to something like this happening?

Q: OK. Final thought then from you Nico. You won here from pole last year, your thoughts on what will definitely be a tough 78-lap grand prix tomorrow.

NR: Yeah, well, very, very happy to start from first. It’s going to be a long race tomorrow. Also there’s supposed to be some weather coming in, so we’re not sure if it’s going to stay dry or not. Of course, [I’m in] the best place to start from and just need to try to get a good start. That’s been our weakness recently but we’ve worked on it a lot. So I’m quite confident that we’ve got the starts sorted now, so that should be OK. And then, from then on try to take care of the tyres – tyres will be very important as always in the Monaco Grand Prix, take care of those and everything should be OK.

Q: So Nico, obviously there’s only one real major talking point, tell us in detail what happened on the way down to Mirabeau?

NR: I just locked up, the outside front, I think it was, or the inside, I’m not sure, and that put me off line. I was still trying to make it but in the last moment I had to turn out because I was going to hit the tyre wall. It was close but I managed to go into the escape road.

Q: And what was going through your mind on that last lap? You, of course, had the advantage, having set the faster time first, so you knew you were knew you were up and you knew…

NR: Well that’s the whole reason why I’m… I know that I have a banker, a really good banker in there so I just try to push that little bit more and went over the edge.

Q: Lewis, give us your thoughts when you were told over the radio, or you saw the yellow flags and knew that it was all over.

LH: Not really much.

LH: Not really much! I didn’t really think of anything. The lap was done and that was that.

Q: You said you were a couple of tenths up though, so you must have thought you were on target?

Q: And your thoughts on where you go from here. Will you be wanting to meet with the team this evening. Anything unusual before the preparation for this race?

LH: I don’t know, I’ll have a look into the data and, y’know, look where I can improve tomorrow.

Q: Daniel, your thoughts. First time you’ve driven Monaco in a competitive F1 car. Tell us about that step-up in performance, being that close to the front and having a real chance tomorrow.

DR: It was definitely nice to… yeah, again, fight at the front on the field and around here it’s a lot of fun, definitely. It’s always nice when you’ve got a quick car but around here it does feel awesome. The last lap there, went for one last push and just didn’t really get the grip back that I was hoping for and just couldn’t improve on the lap I’d done in the first part of Q3. So, it was a shame because I think in the first part of Q3 we still had a little bit more in there and, yeah, a bit frustrated to be honest.

Q: (Haoran Zhou – Formula One Express) Lewis, how pleased are you with your first lap in Q3 and did you leave some time on the table; if there is, where exactly?

LH: Generally the lap wasn’t too bad. Nico’s been quick all weekend. And just working away at it, one step at a time. I remember starting the last lap and said ‘this is it, this is going to be the lap’. Was two and a half tenths up and didn’t get to finish it.

Q: (Leonid Novozhilov – F1Live) Daniel Ricciardo, what you can say about the Red Bull team’s chances in this championship?