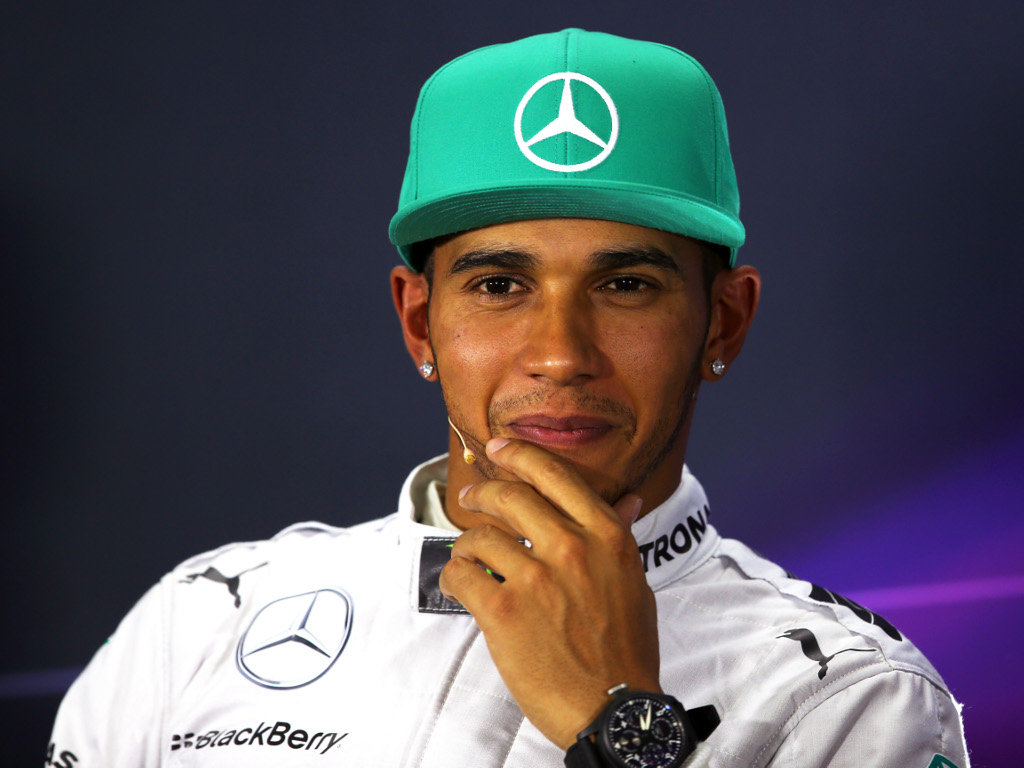 Q: Lewis, congratulations, your third pole this year. That must have been so difficult with so many difficult and different conditions out there. What sort of satisfaction do you get from that?

Lewis HAMILTON: Definitely the most when it’s raining. It’s so slippery out there, trying to find the grip, obviously not making mistakes on your lap, and really putting it together, especially when you have these guys pushing you. So, it was a tough session. I really enjoyed it. The car was feeling great. We always have stuff we can improve but the team have done a great job this weekend. A good position for the race and I hope we can follow through tomorrow.

Q: Daniel, you’re second on the grid, your equal best ever grid position. What sort of satisfaction for you to put together such a good lap in these conditions – right at the end there?

Daniel RICCIARDO: Yeah I think that was very pleasing to do it at the end. To be honest, I struggled a bit throughout the session, at least personally I didn’t feel like I was getting on top of the conditions but then the last set of inters right at the end of Q3 we managed to get a bit more out of it and I put a good lap together, so pretty pleased to be on the front row. Yeah, a good day.

Q: Sebastian, is this Red Bull Racing coming back and getting on terms with Mercedes back at the front?

Sebastian VETTEL: Well, in wet conditions I think we have a bit more of a chance. In dry conditions they are still quite quick and a little bit too far away. But let’s see what happens tomorrow, I think the weather forecast is dry so for sure we’ll try. I think we are in the best positions to try to give them a very hard time tomorrow.

Yes, what is the weather forecast for tomorrow, Lewis? What are you expecting? What are you looking forward to in the race tomorrow

LH: I was told it is going to be a good day tomorrow – I don’t know if it’s going to be the same for you guys? So, we don’t know. Here it’s always hazy, you don’t really know what’s going to happen with the weather but it will be cold for sure. Today you didn’t see the track drying up at all. But I hope it’s a dry race. Obviously these guys are a little bit closer in the wet, but we’ll have a good race either way.

Q: Lewis, going into that session I think you just did one lap this morning – so how well prepared were you for that session?

LH: Yeah, I mean, we all had to save our tyres. It’s interesting because I’ll have to go and analyse it ‘cos I know at least one of these guys was driving a few laps in FP3 but I didn’t feel the need to go out really. I think it’s kind of… I don’t think it’s great for the fans that we don’t have a huge amount of tyres to… just to go out and run so they can see us driving. I’m sure people are tuning in and turning up to the track to watch us drive and we’re kind of a little bit restricted, obviously with the engine mileage and also with the tyres, so it’d be cool if we had a little bit more tyre life, then we would do some more running. But otherwise it was no different for me. The car felt good in qualifying.

Q: And in dry conditions, how do you feel?

LH: Yesterday was not a good day for me, so I struggled through P1 and obviously didn’t get to run through P1 and then P2, the car wasn’t very good. But we made some changes so I’m hoping… it’s kinda strange because we made all those changes overnight and then today it’s been wet so I’ve no idea if it’s in the right direction. It looked good in the wet so hopefully it’s the same tomorrow in the dry.

Q: So in a way you go into the race tomorrow with a bit of an unknown car.

LH: Yeah, definitely. I do particularly, because I missed P1. So it’s a little bit of an unknown – but it shouldn’t be too far off.

Q: Daniel, this circuit, just looking at the streams across the track, the changing condition, the rain came and went… tell us all about that.

DR: Yeah it’s a challenging circuit, I think, in general. Especially when a bit of water falls on the track it always makes it more challenging wherever you are. And there’s a few places across the track here where there’s a tarmac change and you get quite a big difference in grip through some of these corners – so trying to basically find the right line and the best way to drive around, particularly these trickier parts of the track with tarmac changes, is a bit complex. Took a bit of time to understand that but I think we got it in the end. Looking forward to tomorrow. If it’s dry I think we can race up the front. I’ll be ducking my head down the straight, like in a go-kart but yeah, we’ll hopefully hang on and fight for at least a podium I hope.

Q: And how do you feel going into the race in dry conditions?

DR: Yeah, as I say I think we’ve got a good chance to at least stay up the pointy end. It’s probably going to be a big strategy game tomorrow with two or three stop. It’s pretty close. If you can make a two-stop work successfully I think it’s going to help out but y’know, we’ll see what happens in 24 hours.

Q: Sebastian, pleased to be back in our press conference again, in third place?

SV: I missed probably one race, so it’s not a disaster.

LH: He’s been in quite a few times over the years so…

Q: But in terms of being competitive again and in the dry, you didn’t sound as though you were very convinced you would be [competitive] in the dry but perhaps in the wet more so?

SV: Yeah, just if you take yesterday as a reference we were in good shape but I think missing the Ferraris this afternoon compared to yesterday afternoon. Yeah, we knew that in wet conditions probably we can be a little bit closer probably similar to what we’ve seen so far in qualifying, unfortunately only in Australia, where Daniel I think finished… qualified P2. Malaysia we were pretty close and again here. Maybe not that close this time but closer than we were yesterday probably… and the last race.

Q: And in terms of the race tomorrow, what’s the major factor? It’s interesting to see how much wind there is out there.

SV: They say the weather should be fine tomorrow but I think around here you cannot really trust the weather forecast, so the best is to look out the window in the morning and see what you have. I think that’s fairly much the plan. In terms of tyres a bit compromised for the race, should it be wet, because we used most of the tyres today but I think most people were confident to do so because tomorrow should be dry so long story short we expect dry conditions and hopefully we can finish similar to where we started.

Q: (Livio Oricchio – Universo On Line) Sebastian, you have a more competitive teammate this year; does it change your approach to the weekend?

SV: Well, that’s a compliment to Mark, I should say, in his absence. I think this year is very very different, the cars are very different so I don’t think you can compare last year to this year, first of all, but nevertheless, I think Daniel is doing a very good job, he has not just had one good weekend, he had good weekends and so far he seems to be able to get the maximum out of the car. On my side, maybe I’m struggling a little bit more, but at the end of the day we have the same car – there’s nothing between cars, so if he manages to beat me, then he beats me on the circuit, fair and square. Of course, that’s not to my liking but equally, I know that I have to do a little bit better.Q: (Frederic Ferret – L’Equipe) Daniel and Sebastian, there are two Red Bulls in front of one Mercedes; do you think there is a chance that we see a Red Bull winning tomorrow or are the Mercedes untouchable?

SV: Well, I think if we put two chicanes in all the straights then yes.

DR: The idea is to get a good start for both of us and just drive side by side the whole race and then just fight it out on the last lap! Yeah, I don’t know. Realistically we have to wait and see but if we do I’m sure it won’t come easy.

SV: But do you agree on the chicanes still?

Q: (Michael Schmidt – Auto, Motor und Sport) Daniel, you said you only found the right grip on the last run; was it because of what you explained before, because you had to find the lines where the tarmac changes or was it because you used different tyre pressures or whatever at the end? And can you tell us where the tarmac changes here at the circuit?

DR: I think that with a bit more water than we had this morning – I only did one timed lap this morning – but with a bit more water out there this afternoon, it probably changed more than I expected so maybe some of the lines or the approaches I had on track this morning had altered a bit. Yeah, it took me a little bit of time, I guess, to figure that out. With tarmac changes, there’s a couple across the track but the main one I think that we feel in the race car is probably turn eight, I think, it’s after the long fast left and then into turn eight, there’s a tarmac change there and the car sort of bounces around a bit there. That’s just a bit of a challenge, I guess, in these conditions, so trying to get around there was… fun.