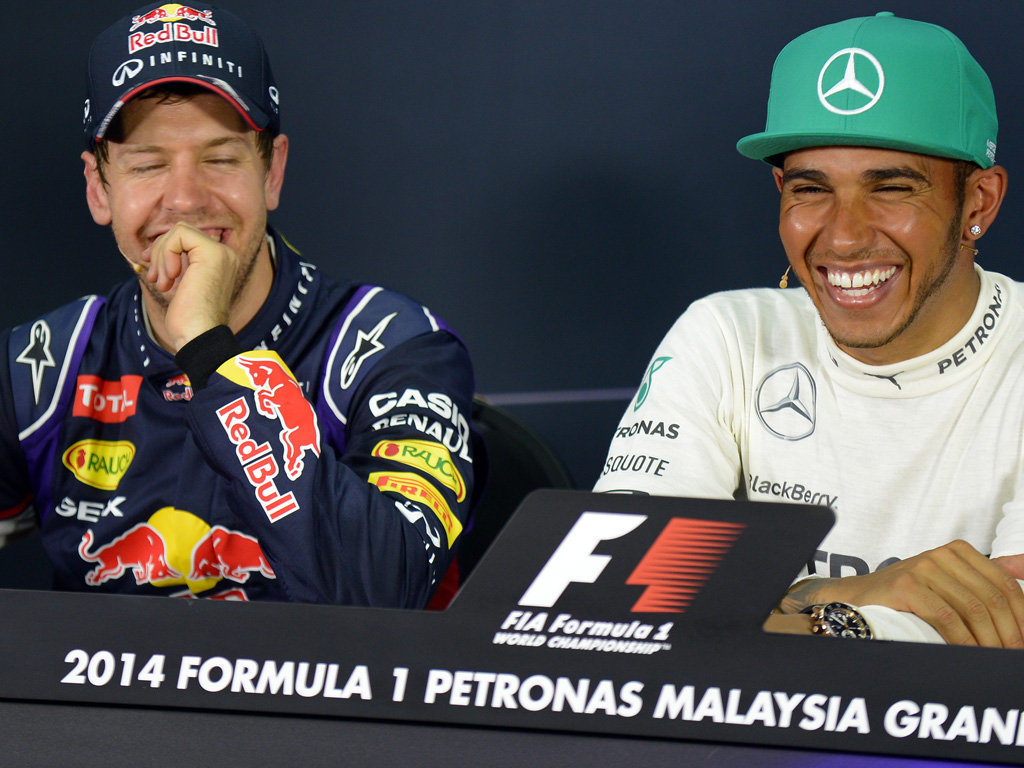 Lewis Hamilton, Sebastian Vettel and Nico Rosberg faced the media in the wake of qualifying for the Malaysian GP…

Q: Lewis, it was pretty close at the end. Obviously a very tough day in terms of the conditions and stoppages, how great is the joy at the moment?

Lewis HAMILTON: A bit all over the place at the moment. I’m really happy, firstly with the job the team has done and just generally how well we have done throughout the weekend. But today was just incredible, how much, firstly, it rained before qualifying and then during the session it was very, very tricky out there I think for everyone. Particularly at the end it was almost impossible to see anything. During my last lap I just couldn’t see a thing behind Hulkenberg. I couldn’t see where the track went, didn’t know where the corners were, when to brake. To start the lap I couldn’t see where Fernando was behind me, so it was impossible to try to get a gap, so I had to bail out. But fortunately… very close. These guys [Vettel and Red Bull Racing] are definitely a little bit too close, so happy to be here.

Q: I make it five one hundredths of a second between you at the end there. Sebastian, you had to recover from an early setback, with a reset that you had to have on your car. What was that all about and how do you feel about where you ended up as a result?

Sebastian VETTEL: Well, obviously, yeah, the beginning of Q1, the heartbeat was definitely rising very quickly when we realised there was an issue, restarted the car, which seemed to solve the problem. After that it was fine, so it was good to go out and get another feel for the car, in the wet, with the conditions. As Lewis touched on it was very tricky. Q3 was not perfect; I would have loved to have a second go. My first attempt, I felt there was a little bit of time to gain here and there, so obviously very, very close; too close because definitely the margin was possible to go that much faster but equally I think if Lewis had another chance he would have improved as well. Would, could, should – at the end of the day it’s good to be on the front row. If I’m not wrong I should be on the good side [of the grid] tomorrow. It depends on how good the start is but for sure very happy with the result.

Q: It looked as though you were perhaps faster than your team-mate on the intermediates, but then slower when it went to the full wet conditions but again a very close fight between you.

Nico ROSBERG: Yeah, it was, except for right at the end unfortunately. I was a little bit less comfortable on the full wets, especially in braking, so I’ll have to look into that. But other than that, it’s still a decent place to be, third place. The race is going to be long tomorrow; who knows what the weather is going to do and everything. So that’s OK, just looking forward to tomorrow now, to try to make the most of it again.

Q: Well done. Coming back to you Lewis. Your second consecutive pole but I guess after what happened to you in Australia your focus is 100 per cent on getting some points on the board tomorrow?

LH: Definitely, definitely, for myself and for the team the priority is to try to bag as many points, collectively, me and Nico. I think we have a great opportunity, we’ve got a great car and the team’s just performing fantastically right now, so fingers crossed we both see our way through to the finish line.

Q: Can I bring you back to the question I asked Nico about the difference between you on the intermediates early on in the qualifying and then the full wets later on? What’s your side of the story, in terms of how you saw that?

LH: Not much really. Wasn’t really able to drag the most out of the Inters and when I got to the Extremes it was much easier extract it. I saw where I was losing time and it was very easy to correct it. Obviously my lap at the end, what I qualified on, was obviously not my optimum, not my best lap, it was the first lap so at the end I kind of just messed it up for myself, I was in an awkward position, I wasn’t able to go get another lap but naturally I think with the fresh tyres there was more grip, so I should have been able to eke out a little bit more time.

SV: Well, to be honest I think Mercedes as a team has the best package. They’ve done a very good job across the break. Obviously with new rules there was a lot of work, so I think they’re the favourites at the moment, no matter, I think, where we go. As a fact, after that I think it’s fairly close between the other Mercedes-powered teams and probably Ferrari and us. I think we’re similar, depending on the day, conditions etc., but difficult to judge. As you said, it’s only one-and-a-half races in. But I’m very happy, to be honest, because we had a bad winter, but the team is fired up, the guys are pushing still flat out. I cannot even imagine how they must feel. It was very tough, we didn’t run a lot, so for us drivers it wasn’t very tough but they surely had a lot of jobs to do on the car: cover off, engine off, change the engine, change this, change that. A lot of work, but they are very happy and it seemed to pay off, bit by bit. Obviously we still have a way to go but… yeah, that’s how I see it.

Nico, of the three drivers up there, obviously you’re the only one who’s completed a competitive race distance in a grand prix – can you talk a little bit about the strategy, not just the tyres but also the deployment of these new energy recovery systems. How big an impact can conserving, discharging etc., how big an impact that can have on the racing.

NR: It’s not as much as I would have thought initially because on a track like here, there’s not that much you can do. It’s so easy to… you boost a little bit more on the straight and you discharge a little bit more back there and it’s all done. It’s not like you can push someone into having no battery charge left and then easily overtake him – that’s not the case. I thought it was going to go a bit more in that direction but actually it’s much more simple than expected. Still, of course, a little bit can be done…

QUESTONS FROM THE FLOOR

Q: (Frederic Ferret – L’Equipe) Sebastian, do you think that with the rain you can beat the Mercedes or are they still too quick for the Red Bulls?

SV: I think we always have a chance to beat everyone, that’s why we’re here. Obviously, as I said, in terms of a package, I think they have the most competitive package. Lewis isn’t digging around, equally, Nico is doing a very good job. It’s difficult to beat them on the day but it’s not impossible. It would be quite sad to wake up in the morning thinking that you can only finish second or fifth or eighth. We’re here to win. We know that in the rain everything is possible, it’s more likely for us to make a mistake, maybe the performance of the car is not that important compared to the dry, to raw dry conditions. We will see what happens tomorrow. If the race is at the same time, I think there is no rain or not so much rain forecast but there’s always a chance around here. We will see but I think yesterday was good, today was very good so it should be a good race. I’m keen to find out where we are, where I stand. Obviously I haven’t done a race since Brazil last year so I’m looking forward to tomorrow.Q: (Michael Schmidt – Auto, Motor und Sport) Question to Sebastian and Nico: at the end of Q3 you were almost coming together, I think. Sebastian, you weren’t able to do another lap, what happened there?

SV: Nico couldn’t see much in his mirrors, I guess. Obviously I was on a flying lap and Nico was preparing his hot lap, if that’s correct, and not much happened. Obviously I was pissed off at the time because… sorry, I was angry at that time, at that moment because I turned into turn 12 not knowing where to turn in because I couldn’t see anything. The lap was lost but equally I think there was another car in front of Nico…

NR: I don’t think that was me.

SV: No, so then it was Lewis. I think it was a Mercedes.

NR: I don’t think it was me. I never had anybody behind me.

SV: Anyways, I ran into traffic, not really, there were two seconds or three seconds gap but enough so that the next corner was completely blind. That’s it.

Q: (Yassmin Abdel-Magied – RichardsF1.com) Lewis, you’re now the best English qualifier and equal best British, how does this make you feel and were you surprised by how close Red Bull and Mercedes were in terms of times?

LH: Yeah, definitely. The thing is in qualifying so much is going on so sometimes you forget… you don’t forget but you’re caught in situations and you wish you had another lap. For sure, I don’t fully understand exactly why everyone closes up, particularly Red Bulls get a little bit closer to us when it is wet. That’s something we have to work on but naturally I think, they’re always quick in the wet. [Hey guys, I can’t even hear myself talk.]

SV: We’re still figuring out who it was…

LH: But very very proud to be representing the UK and to be amongst the names like Nigel Mansell and James Hunt, James Clark, sorry, Jim Clark, is really really a real honour to be there.