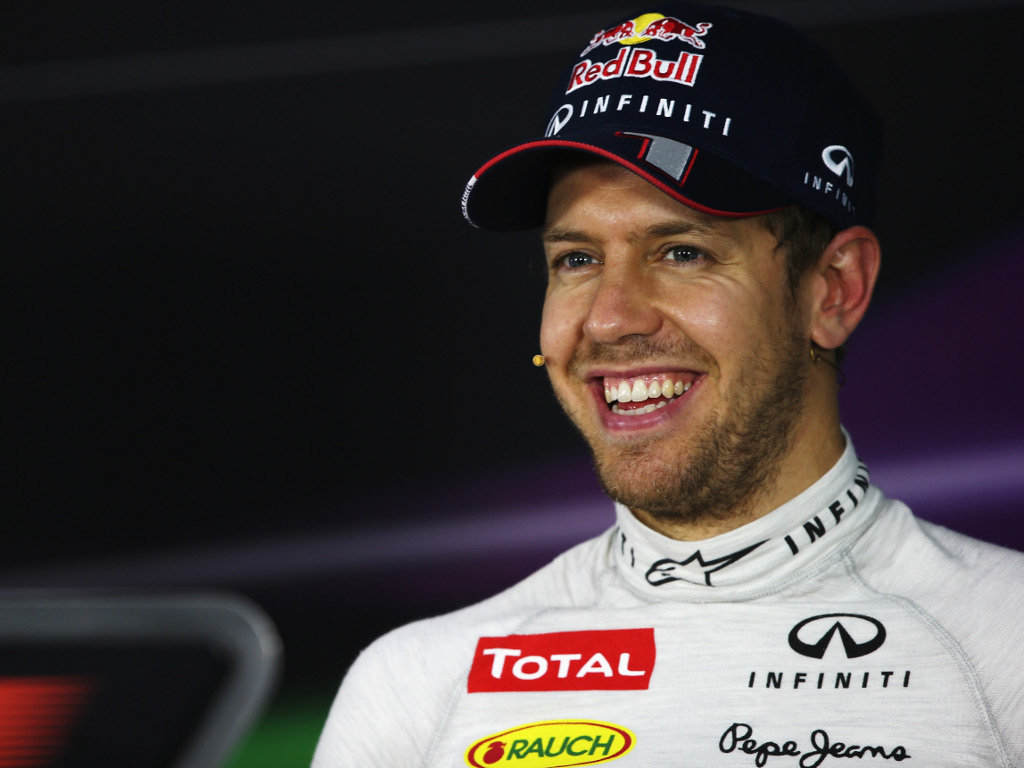 Q: Sebastian, you saved the best ’til last there. A satisfying pole I imagine here in America, in very difficult conditions it looked like today, and also on a special day for your team boss Christian Horner, his 40th birthday.

Sebastian Vettel: Yeah, happy birthday to Christian. Obviously a good result to have both cars in the front row for tomorrow. It was a tricky session because the wind, I think, picked up quite a lot from this morning and… yeah, it does influence the behaviour of the cars so, not that easy, especially around the high-speed corners. I wasn’t that happy with my first run in Q3 but I think I had a solid run at the end which I think was enough to put the car on pole. I think it was very close with Mark, he seemed to get closer and closer the longer the weekend went on. Fortunately I could just manage to stay ahead. I think he might have had a mistake in his final shot but yeah, obviously very happy with pole position today. I really like this place, I like the circuit and looking forward to tomorrow. I think it’s important as well to start on the clean side, so we’ll see what we can do.

Q: Mark, did you think you’d done enough after that first run? A tenth and a half over Sebastian in Q3, doesn’t happen all that often. Where did it go wrong in that final run?

Mark Webber: No, I didn’t think I’d done enough, you need to improve. Obviously there are two shots, we both had two sets of options. The first part of the lap was very good, I was happy with that. Didn’t quite get 19 and 20 as I wanted. If I just repeated what I did initially in Q3 probably it was going to be enough but tried to squeeze a bit more out. It’s easy to unload the car a little bit in these conditions, so yeah, sometimes you’re happy that you’ve given your best and you’re on the front row but today one slipped through the fingers. But anyway we’re up there and well done to Seb, obviously. He put the three sectors together so… I put two-and-half together and just dropped it in the last sector, so, yeah, it’s not satisfying when you do that. It’s not your job to do that. Pushing the boundaries and overall, yeah, pretty happy to be there.

Q: Romain, pretty consistent form from you, your third top-three qualifying in the last six grands prix, already five podiums in this season. Some good momentum behind you at the moment.

Romain Grosjean: Yeah, I think we are doing a good job. It wasn’t an easy weekend for us. We struggled a little bit yesterday and this morning. I think conditions are not so easy starting early in the morning – and I don’t like to wake-up early as well so it doesn’t make it easy. And then I think quali went pretty good. We did manage to go through Q1 on prime. That wasn’t the plan but we were quick enough and then, quickest of the rest but it seems that those blue guys are very, very quick. We have to still try to catch them, the race is long and, y’know we will see what we can do with the strategy and everything but it’s good to be here and good to show that we are still in the front row.

Q: Sebastian, looking towards tomorrow’s race. Are you someone who feels a sense of unfinished business, given what happened in the way you lost the race here last year? Is it important for you to tick this one off?

SV: Ah, well, I think no regrets to last year. Obviously it was a tight battle with Lewis. I think in the end he was just a little bit quicker so we were having a hard time to stay ahead of him. Obviously the way he then passed was not the nicest way with traffic but, y’know, it’s a long time ago, so looking forward to tomorrow and, as I said, I like the circuit. Yeah, definitely, if you have the chance to win then you want to go for it. At the moment things are looking good. We did the job right today, focus on tomorrow but we go step-by-step. It’s a long race, tyres could be tricky. I think the strategy should be more or less clear but then again with these tyres you never know.

Q: So Sebastian, obviously you made it through Q1 only using the harder tyres, a tactic that all three of you adopted. I’m interested though in your final run in Q3. It’s not the first time that we’ve seen you do this where you perhaps hold back a fraction in the first sector in order to have more performance in the final sector which is where you seem to make the difference today. Is that a conscious tactic or just the way things worked out?

SV: Well, I think first of all Mark is quick in the high-speed stuff, so I knew it will always be close. I think he was a little bit quicker in sector one. But you’re right, obviously, it’s a long lap. Especially the first run in Q3. I started to feel a little bit uncomfortable with the rears at the end of the second sector and then in the last sector, so… yeah, I think I got it a little bit better the last time around but also tried to… well, you can’t look after the tyres that much on one lap but just tried to keep it clean, get a clean lap. I knew I had more pace than the first run, so managed to do that and fortunately managed to get pole.

Q: Mark, twice pole, once second in the last four races. A very competitive run of form at the very end of your Formula One career. Not having second thoughts about retiring, given how well you’re going?

MW: No, that’s why it was so frustrating to not get pole today. Would have been good to get another one off Seb at the end with a few grey hairs – but didn’t happen, he did the lap. Anyway, I’m having no second thoughts. Good timing for me. Hand over to quicker guys.

Q: You seem to be driving with a lot of confidence. Is it because you’re feeling very relaxed, heading for the exit door?

MW: I don’t think so. I think the tyres, when they’re fresh-ish I can still turn not a bad lap. So, confident we can have a good race tomorrow. It’s a pretty nice circuit with some nice, fast sections at the start. All in all my form this year in terms of pace hasn’t been ridiculous. Obviously Seb’s been still pretty strong in quali overall but we know we’ve performed pretty strong in terms of pace in general. Obviously we’ve lost a huge amount of points for other reasons but want to finish the year strongly and hopefully we can do that again tomorrow.

Q: Romain, you too got through Q1 using only the harder tyres. It’s not the first time that you’ve done that. It’s a fairly confident thing to do, given that the cut-off is quite marginal sometimes. It’s caught you out at other times. Can you talk a little about the confidence you’ve felt going into this session – and did you always feel throughout Q1 that you were going to get away with it again?

RG: To be honest, it wasn’t the plan today. After India I think we had to take