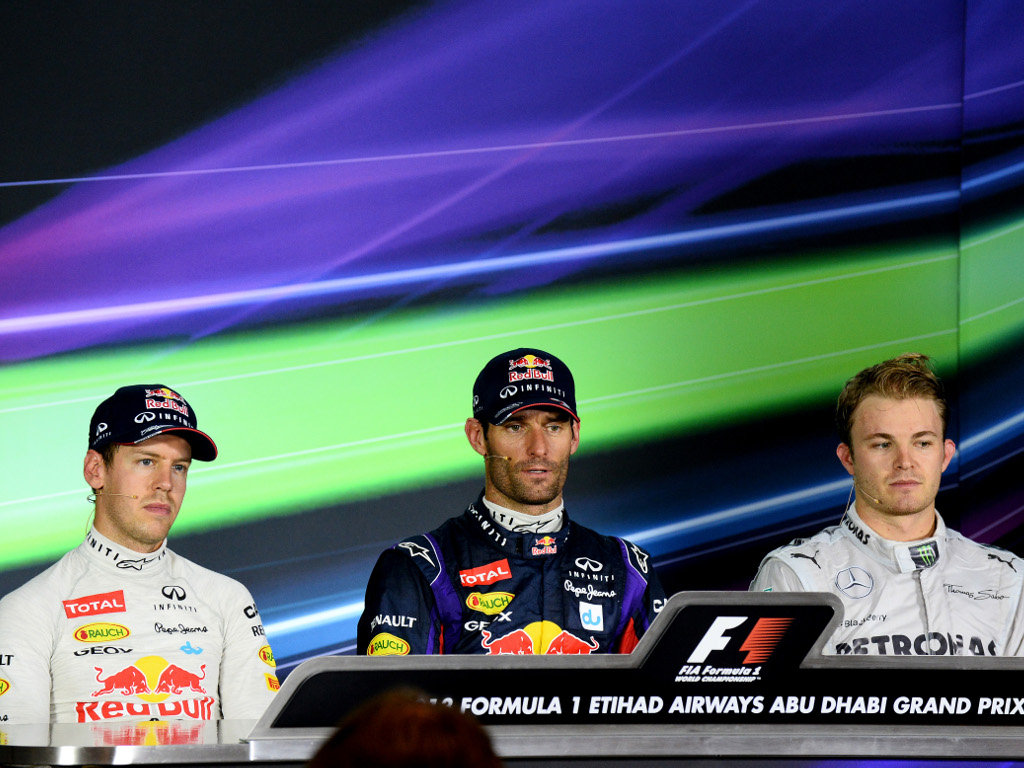 Mark Webber, Sebastian Vettel and Nico Rosberg faced the media in the wake of Saturday’s qualifying at the Yas Marina circuit…

Mark Webber, Sebastian Vettel and Nico Rosberg faced the media in the wake of Saturday’s qualifying at the Yas Marina circuit…

Q: Mark, your second pole in three races now. Describe your feelings, particularly on a track where your team-mate has always been so strong.

Mark WEBBER: Yeah, I think this weekend so far has gone pretty smoothly for us. It’s not the easiest venue because of the temperatures, when the sessions are: obviously in the afternoon and then the night session. You’ve got to be on top of that as a driver and also from an engineering perspective. So, we did what we could do. Not the smoothest part, I would say, to the start of Q2. Also Q1, we were not, I would say, electric but then getting into the groove we changed the car quite a bit, with the front wing level and things like that, as the session went on. And I got more and more comfortable. So, I knew I had to work on certain sections of the track. Sebastian had already been doing a good job there already so I had to try to match him there and keep the areas where I was still doing a pretty good job. Overall happy with the pole. It was a good lap obviously on a track which in the past hasn’t been super-invigorating for me in terms of layout, let’s say, but we certainly enjoyed the quali today and really looking forward to the race tomorrow because we’ve got a good car for the race in these conditions.

Q: Sebastian, obviously a slightly unusual session from your point of view, didn’t top the times in any of the three parts of the session. What were the tactics today and where did it get away from you?

Sebastian VETTEL: Well, I wouldn’t call it unusual. I think we were still pretty competitive, that’s probably the difference from you guys and us inside the garage. There is no guarantee. I think it’s a great result for the team, first of all. Start of qualifying I think Mercedes looked very, very strong. Both Nico and Lewis, especially in Q2. I think Mark and myself weren’t hanging about in Q2 but they were very, very strong. But we seemed to be able to find a little bit of extra time in Q3. I think I did a very good lap so congratulations to him. I think I should have done a little bit better but I don’t know if it had been enough. As a fact he deserved to be on pole today. He did a good job, no mistakes. As I said, on top of that, a great result for the team. We should have a strong race tomorrow.

Q: Nico, previous visits here, two times ninth, two times seventh. So a big step forward for you. And again, for you, your team-mate has always been very strong here and you’ve beaten him.

Nico ROSBERG: In general I’m pleased with the result for sure: third place, best of the rest, which is our target for the weekend. It was nice to annoy Red Bull a little bit from time to time there in qualifying but in the end they were just too quick again. But anyway, third place is good, I’m pleased with that. And again [we’re] just looking at the Constructors’ [Championship]. That’s what counts for us, third and fourth, blocking out the second row of the grid. Lotus for sure are some way back but especially Ferrari, who are our direct competition, they’re well back, so that’s a very good result for us today in qualifying.

Q: Coming back to you now Mark. You didn’t manage the win from pole in Japan. Just a few races to go before the end of your Formula One career and a great chance tomorrow to sign off with a win.

MW: Yeah, look as Seb touched on, there are no guarantees. We have a good car in the race I believe. As we’ve shown in the last few events we’ve always been certainly there or thereabouts and leading some race in the last few events and challenging for some very good results. Like you say in quali it’s been pretty strong. Korea in the race, yeah, coming back from the 10-place penalty and bits and bobs. So, in general the form has been very strong, carry that over tomorrow night, keep my head down and look for a very good result, there’s no question about that.

Q: Mark, why is it that this year has been so different from previous years. What is it about you that’s just hooked it up here?

MW: Well, I was pretty competitive last year here in qualifying. I think it’s probably no super secret that I like the more flowing circuits but you have to put your heads down and get on with these types of circuits like Singapore and Abu Dhabi and do the absolute maximum and do the best. When you start in Formula One, there is not a huge amount of circuit around like this but there are more and more now and that’s part of our job. With that, I get more exposure at these type of circuits and I think you learn more and unfortunately, or fortunately, I have a guy in the other car who is pretty handy on these type of tracks and you can also do some learning in that respect. I think it’s a strong type of layout for Seb, as he’s proved in Singapore and those type of tracks. In the end, more experience. You can never stop learning, mate, even at this age, so it was a good day and puts us in a good position tomorrow.

Q: Sebastian, we heard you on the radio at the end, just apologising to the team that you didn’t make the most of sector one in particular. You haven’t made that many mistakes so far in 2013, I guess the heat is off now, you’ve already done what you needed to do but is that what led to the mistake?

SV: I was pushing hard, that’s the reason behind it. Surely, I think, as a driver, you always argue that there is a little bit here, a little bit there but the bottom line is that if you look at it from the outside as well, if you push yourself to the maximum trying to get everything out then you do mistakes as well. I’m not very proud of that but I did what I could today and it wasn’t enough to be on pole and that’s why I said it before and I’ll say it again – Mark deserved to be on pole, no doubt. So, I think the car was good. That’s why I apologised, I said, ‘sorry guys, I messed up a bit at turn one’. It’s a tricky corner. If you get it right, it feels great. It you mess it up, it doesn’t and then you have a long lap trying to make up for it. But obviously there is a limit. Overall, as I said, I was happy but didn’t manage to get everything perfect. Whether it would have been enough, I don’t know, Mark did a very good laps, so we’ll see tomorrow.

Q: Nico, before qualifying you could say that you hadn’t perhaps hooked up the final sector maybe as well as the other two but you put it all together when it really mattered at the end. Maybe you could talk a little bit about your preparation for qualifying.

NR: I progressed really well through the weekend. Set-up progression was massive, it changed so much from the beginning to the end and it’s just very difficult because the first session of each day is so hot that you can’t really