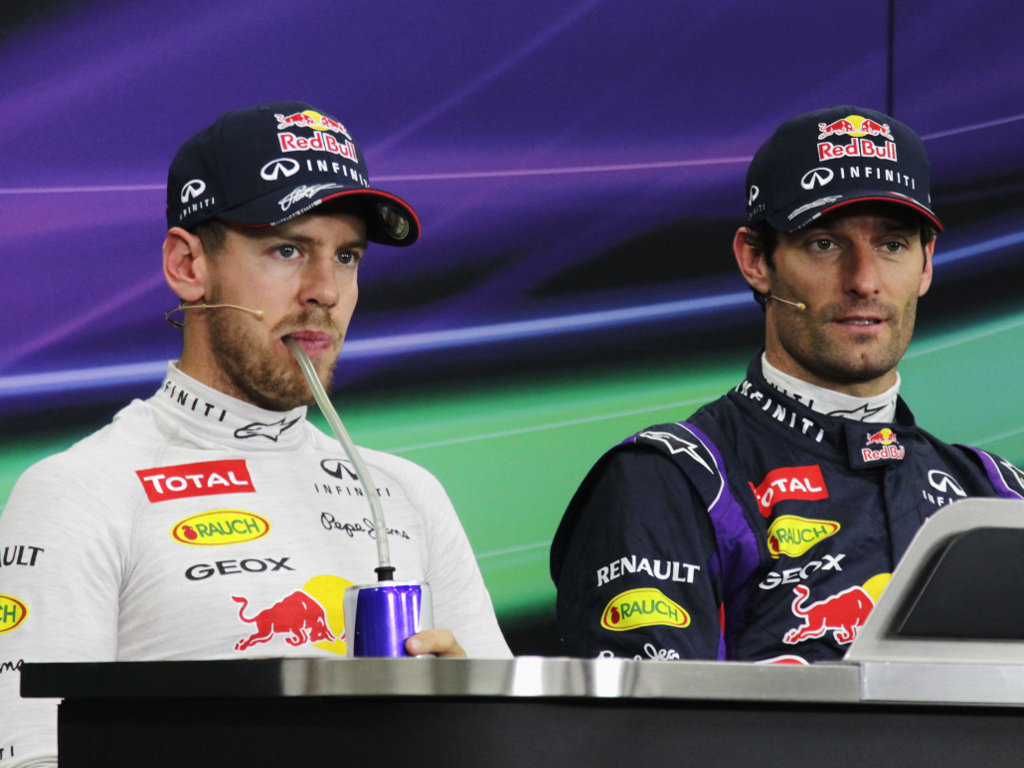 Mark, congratulations. It’s been a long time this pole position this year. It’s your first time fastest in a qualifying session.

Mark WEBBER: Yeah, it’s a great track. We all enjoy driving here. The laps weren’t too bad to be honest. You always want a little bit more here and there but in general it was pretty good. Sebastian had a problem in qualifying, so a little bit of a hollow pole position if you like, because he still did a phenomenal lap, but I’m happy to be on pole. You’ve got to grab the opportunities when you can and still put the laps in. Bit of a mixed session, people were throwing options and primes all over the joint in Q2; people were on scrubbed and unscrubbed. So it was a bit of a mixed session in terms of trying to predict who was showing their hand. But in the end we did the laps when it counted and that’s what was important. Very, very nice farewell for me to have pole here on my last attempt at Suzuka on a really phenomenal circuit. I’ll never forget the first sector today. That’s what us guys strive for and yeah, our profession is all about that so it was a real highlight for a lot of us out there today.

MW: To be honest we needed to check the car this morning with the different wind conditions. That’s important. I think you’ll see everyone today went a lot quicker. So we were factoring that in. The circuit had changed a lot. Also, it’s a very strange circuit, it’s a very out and back track, it’s a very narrow circuit, a lot of kilometres but in a small gully, so obviously that was something we have to take in mind in terms of our preparation today for the wind. I think we did what we could. We’ve still got some quick cars around but in general we’ve got a good car for the race. Head down tomorrow.

Well done. Sebastian how much do you think losing that time this morning hurt you?

Sebastian VETTEL: Well obviously we had a problem this morning but I don’t think that made a difference in terms of finding the rhythm, I think we’ve done plenty of laps around this track. First of all, congratulations to Mark, I think he did a very good lap. We did have an issue in qualifying but I’m not a big fan of ‘without this, with this, if this’. It’s always unknown. As a fact, we are P2. So, happy, obviously, with the result. Front row for the team, which is great. The car was phenomenal today, as Mark touched on. The first sector – I think you realise afterwards that the car was fantastic through there and you don’t get many days like that, where the car feels great and you can really push it to the limit. Enjoyed qualifying and happy with second place.

In fact, in the two laps you did in Q3 it looked as if you just went a little bit wide out of Spoon on one lap and I’m not certain what happened in the middle sector on the final lap.

SV: Nothing. I kept it on the track. Obviously I tried hard on the first attempt, a little bit too hard. Tried hard on the second attempt but managed to stay on track. Obviously you gain a little bit before you go off track in the first attempt and then you lose down the straight and obviously the second time around I was a bit more conservative but gained down the straight, so overall it was a net gain. But, yeah, I think we were all pushing to the limit today, as Mark touched on. Again, with the wind it was tricky, some gusts here and there but in the end we are pushing and mistakes happen.

Q: Lewis, I don’t know how happy you are with third place. You’ve been a major challenger all weekend.

Lewis HAMILTON: Yeah. No. I’m really happy. I think the team did a great job so far this weekend and realistically it was difficult, or almost impossible, to finish ahead of these guys. They’ve had a much better package generally for a long, long time but I think we’ve come a long way and to be as close as we are, I think is a huge compliment to the team. The car was feeling good. My car felt awesome so I can’t imagine how it felt for them – and congratulations to Mark. I’m looking forward to racing them tomorrow.

Q: What’s going to be the major factor tomorrow? A lot of people talking about tyre management and making sure you don’t lock-up – that it’s too easy to lock-up at this circuit.

LH: Well, there are not many big braking zones but locking is always an issue. Degradation is going to be really the key tomorrow. I hope we can get a good start, being on the cleaner side and be able to at least put up a little bit of a fight for these guys, don’t let them walk away with it too easily.

MW: Yeah! Haven’t been too bad of late, I don’t think. We’re doing the prep we can, the clutch is in good shape and we should be able to get away well and head down after that for a good race.

Q: Who’s going to be the major threat do you think tomorrow?

MW: At the front of the grid in the grand prix there’s no-one ahead of you so it always has to come from behind if there’s a chance, so I’ll focus on myself and try and get some gaps if I can. Obviously Seb, Lewis, Lotus as well in the race. Who knows? You’ve just got to be mindful of the fact of tyre management, get the strategy right, execute a clean grand prix from driver, pitstops, everything together. It’s got to work. We’re more than capable of that. Obviously a super-experienced team, we know what we’ve got to do tomorrow. Looking forward to it.

SV: We decided to change the batteries on the car because we had an issue with KERS. Unfortunately we had the same problem in qualifying – so I think we have a little bit more time after qualifying now to have a look and see whether there’s something else broken or damaged. The whole team was pushing very hard. Obviously my car crew but also Mark’s car crew helped out to fix the car in time and get it out for qualifying – so we tried everything. It worked sometimes and as I said I’m sure we’ll find the problem tonight and hopefully it works tomorrow.

Q: Lewis, Were there big changes in conditions today, what with the wind? And also drivers were reporting more grip as well.

LH: Yeah. The wind direction changed, I think 180°, so you had a tail wind down into Turn One but then massive headwind going through the Esses, so it changed the characteristics of the circuit massively. I guess every car will have gained a lot more downforce, so it got a