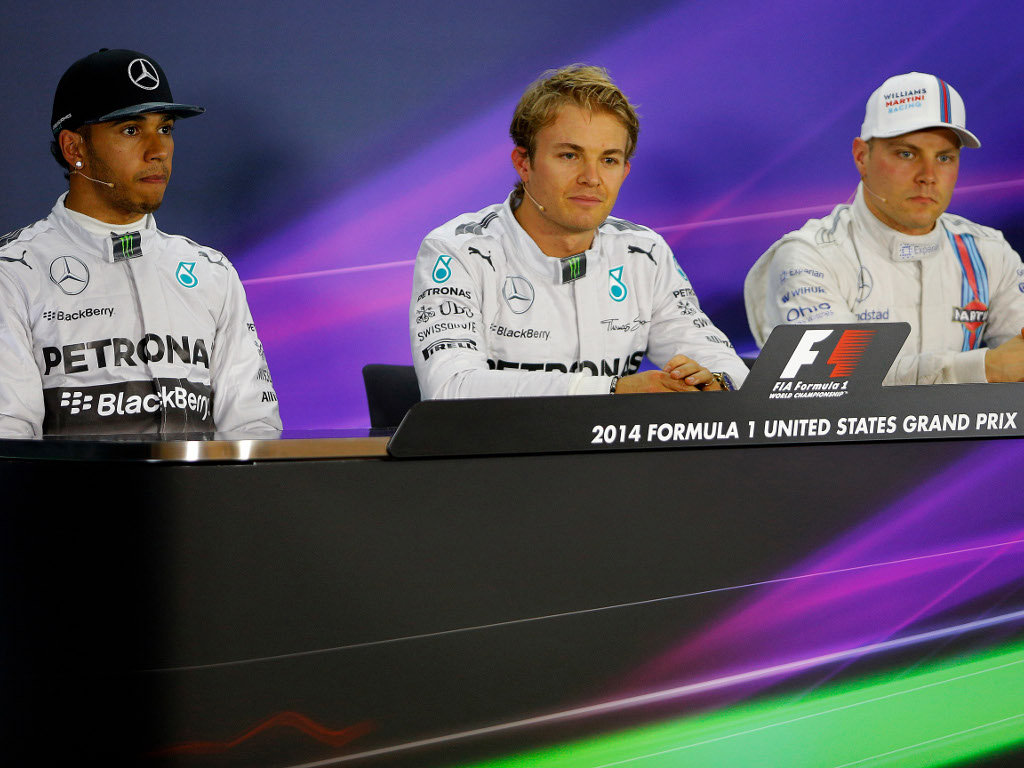 Pole-sitter Nico Rosberg was joined in the post-qualifying press conference by Lewis Hamilton and Valtteri Bottas.

Q. Nico, a very strong pole position, a big margin for you. How do you feel about that? And hings are really hotting up, I guess now, with just three races to go?

Nico ROSBERG: Yeah, great day, very happy. It worked out really well, you know. Together with my engineers I really arrived at a car in the end in qualifying that I was happy with, the balance was good. Because it was quite a challenge, because the wind was changing and then this morning the conditions were quite different, a lot colder, so the track was changing all the time and it wasn’t that easy to get everything right but in the end we got to a great set-up, a great car, so I’m pleased with that. So first place of course today is awesome but you know the race is what counts, so I still need to focus fully on tomorrow and to to bring it home.

Q: Well done. Coming to you Lewis, fastest in practice, fastest in Q1, but from Q2 onwards it seemed to be a bit of a troubled session for you, particularly with braking, in Q2 and again in Q3 I think?

Lewis HAMILTON: Yeah, absolutely. Obviously, Nico did a great job today. I really struggled with braking, yeah. When you look at the brake temperatures, the left brake was always around 100 degrees less than the right front brake. It just kept catching. No matter what I did, even if I braked earlier and tried to save it, it would still lock. So that was perhaps where I was losing a lot of the time. But even if that wasn’t the case I think Nico was perhaps too quick today.

Q: Is that an issue for you for the race, with that set of tyres?

LH: Potentially, yeah, so I need to try to see… maybe they can scrub them down or something and try to fix it overnight.

Q: OK, thank you for that. Coming to you Valtteri: your sixth time in the last eight grands prix that you’ve qualified in the top three. That’s some run of form.

Valtteri BOTTAS: yeah, a pretty god qualifying again. I’m really pleased with the couple of good laps I got in Q3 today actually. It’s been a difficult weekend from my side for some reason, to get to a good rhythm and then finally during the qualifying I could really trust the car, like you should do. Really happy for us as a team, again, we locked the second row. It’s a good starting position for tomorrow’s race because we have still important three races to try to keep a good position in the constructors’ championship.

Q: Very well done. Coming back to you again Nico, this track, particularly from the start, one of the characteristics here at the Circuit of the Americas has been the difference between the clean side and the dirty side off the grid. You must be pleased you’re on the right side of that tomorrow?

NR: I haven’t thought that far yet, but if you say it then yes, that’s great, another extra advantage for the clean side of the grid, you know, starting first. Of course the start is going to be important, need to make the most of that and stay ahead.

Q: So Nico, that, I think, is the sixth Mercedes front row lock-out in a row, which is certainly a statement about the dominance you’ve got in the car and the way you continue to stay ahead of everybody. Margin of nine-tenths to Valtteri today, it was four-tenths in Sochi – but you too haven’t been immune from brake problems this weekend, have you? Is this something worrying you at all going into the race?

NR: We’ve had a few issues in general on the car this weekend, on both cars and so yeah, we need to try to get it all right for tomorrow – but personally I’m not worried about that at all because if I would start worrying about that, it’s not going to be good for performance. So I’m very confident the team’s going to get the job done and just concentrate on what I can influence on my driving. I’m not worried.

Q: Lewis, I don’t know if you know but tomorrow is six years to the day since you won your world championship: November 2nd 2008. So I’m sure you’ll be hoping to channel the Interlagos spirit into tomorrow’s grand prix – but how much is that vibration on those tyres going to cause you a problem? Can you drill down a little bit more into that for us?

LH: Well the vibration isn’t that bad. It’s a minor flat spot. They’ll rebalance it and hopefully won’t feel too much with it. The issue is just locking. If I can’t fix that left brake, then that will be a continuing issue throughout the race. And obviously flat spots lead to blistering so I’ve got try and make sure we can fix that this evening.

Q: Coming to you Valtteri, you got your first points in Formula One here 12 months ago. Tell us about the race in prospect for you and also why you were behind Felipe pretty much the whole of today and how you managed to nail him when it got to the business end of qualifying.

VB: Yeah, it should be an interesting race. I think especially the guys behind us are going to be really quick and we’re now in a good position in the team’s championship and it’s going to be an important race for us to get good points with both cars. It’s not going to be easy. So we will really need to try to get everything right tomorrow. Really look forward to the race here, it’s always good fun. In qualifying and in general from the practice, I managed to improve myself a lot during every session and really got the car to a good setup only just before the qualifying and for the qualifying – so I could really trust the car a bit better in the qualifying and get those lines right and get every corner right. I knew that Q3 is the one which is going to matter, and I needed to get everything right and be on the limit and then that’s when I tried to squeeze everything that there was – and I feel I managed to do so.

Q: (Paolo Ianieri – La Gazzetta dello Sport) Nico, where did you also find those tenths that you found in your Q3? Quite impressive pace after always being behind Lewis during the practice.

NR: What was the reason? I finally got there on setup, together with my team. We just continued to improve the car all the time and just got it right and I felt comfortable in the end. I was able to push and it felt good balance. Nailed the lap, got the lap really well, so it all worked out.

Q: (Dan Knutson – Auto Action / National Speedsport News) To the two Mercedes guys, when you have troubles like you did today, little troubles, does it frustrate you or does it motivate you in a way, to say ‘I’m going to beat this and get on top of it and go even faster’.?

NR: Neither of the two really. It’s always a bit frustrating to have something like that in the moment but then, I’ve learned to move on to just accept and concentrate on the things that I can influence and just keep on it. That’s what I tried to do today and it worked out well.

Q: (Ian Parkes – Press Association) To all three of you, you may or may not be aware that there is a very real threat tomorrow – It’s not speculation, it’s not hearsay – of three teams, Force India, Sauber and Lotus, opting to boycott this race. What impact do you feel that would have on Formula One?

NR: No comment. Because I have not heard anything about this and it would not be the right thing for me to even comment on something like that.

VB: Same. No comment really. I don’t know anything about this situation so I can’t really say much.