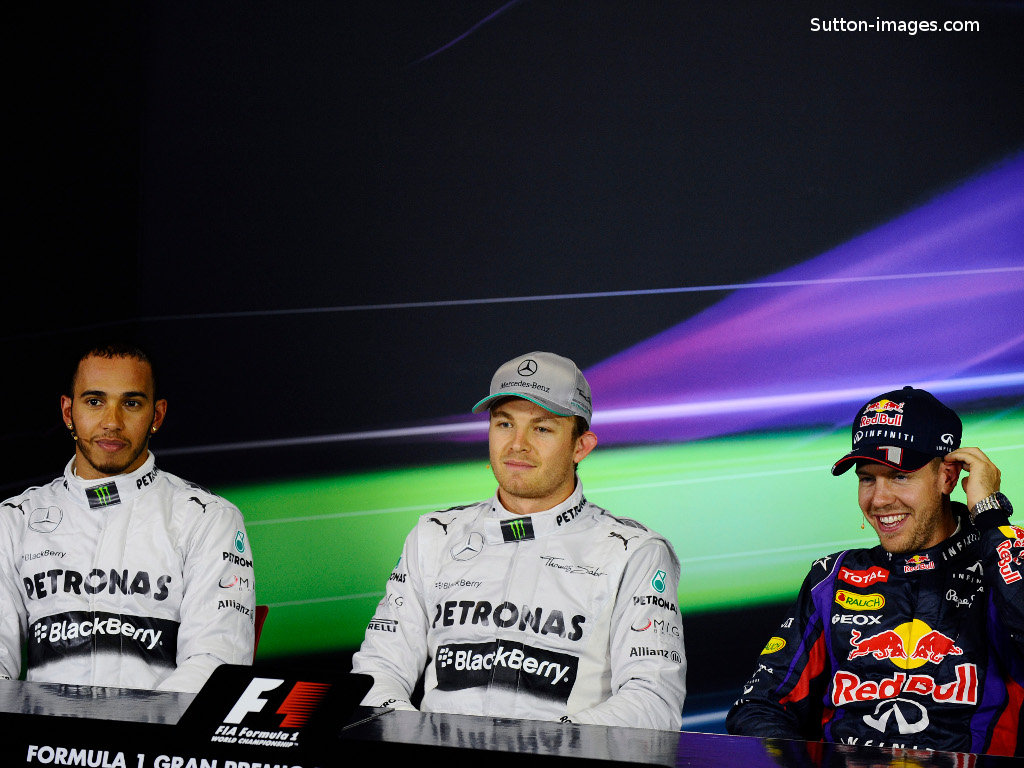 Q: Nico, two in a row. Just looking at the lap there on the monitors, it looked like a very clean lap. Tell us about where you found the speed today?
Nico Rosberg: It’s just been… things just worked really well the whole weekend, just optimised everything. Of course, after Bahrain thinking about the race a lot, also, so surprised that we could be that quick today. But it all went perfectly in qualifying and I had a really good lap in the end. I’m really, really happy with that. It’s always a good motivation boost and everything, especially for the team – front row, fantastic. But of course I have to be a bit cautious because of what happened in Bahrain, so for sure, nice but to be enjoyed with caution.

Q: Lewis, as Nico said a one-two for Mercedes and for you just a couple of tenths off Nico. Where did it get away from you?
Lewis Hamilton: Firstly, congratulations to Nico, he did a great job, so very happy, but also really happy for the team because it’s down to the great work that everyone is doing back at the factory, so I’m very proud to be able to get a front row for the team. But, as Nico said, we’ve got to approach it with caution because tomorrow is going to be tough but today I didn’t have two option sets at the end, which would have helped a little bit but I think was just quicker today.

Q: Well done and Sebastian – final sector it would appear where Mercedes had it over you today, just two or three tenths of a second, I think, on the final laps. Is that where it got away from you today?
Sebastian Vettel: To be honest, no. I was pretty happy with the last sector because historically it has been a bit weak for me. After a couple of years now I finally understood a little bit better the last couple of corners. I’m quite happy to be honest because yesterday and this morning I wasn’t really happy, particularly in the last sector. I think we improved the car. Things calmed down and we had a pretty smooth qualifying session. Again a little bit different approach than the majority of people – using option tyres only. Whether that helps us tomorrow we’ll have to wait and see. But for sure it will be an interesting race. It will be all about tyre degradation. I think we’ve seen this in the winter. We didn’t really get very far, all of us. So now I think with the conditions it’s helping a little bit but still it’s a tough challenge and the tyres don’t last as well as we’d probably all like but that’s the challenge we have to face tomorrow. I’m happy with today’s result. It’s good historically to start this grand prix a little bit further up, so let’s see what we can do tomorrow.

Q: Nico, let’s talk a little bit about the race tomorrow. You mentioned that you don’t want to get too overconfident after what happened in Bahrain, but tell us a bit about the work done behind the scenes to avoid a repeat of what happened to you in Bahrain?
NR: Yeah, for sure, everyone has been working really, really hard back in the factory to understand even better our problems. You know it’s really an ongoing process, understanding how to get the most out of these tyres. It’s really, really complex, for us drivers, for the engineers, for everybody and we’re just a bit behind at the moment. I’m sure we’ve caught up now. But then you come here and there’s different issues again because here it’s more the graining of the tyres that’s the main issue. And so then again here we were trying to catch up and make the most of that situation. I think we’ve improved things. This morning things were looking at little bit better, so I’m a little bit more confident for tomorrow but still the race is going to a whole different thing, with the tyres it’s a big challenge.

Q: Nico, pole position has been vital here in the past. Do you feel that’s still the case? I guess you’re hoping it is?
NR: For sure it’s a benefit to start first. Yeah, definitely. Clean air – hopefully – after the start, starting on the better side of the grid, so that’s all great but the race is very long. To win it’s not good enough to start from pole, you need to have the fastest race car. As we’ve seen, there’s so many differences in speeds through the race and strategy and everything. And if you don’t have a very, very quick car there’s no chance. So, just really need to wait and see.

Q: Lewis, give us your thoughts on how you feel the race will evolve tomorrow. Obviously you starting on the front row of the grid, historically it’s the place to be.
LH: It is, but my side of the grid isn’t really the place to be. These two have a good position on the cleaner side but we’ll do the best job we can from the start but I think more the concern is tyre degradation. Looking after those tyres is going to be an interesting one. I really hope that we can try and get into turn one first, in a 1-2, that’d be really good for the team.

Q: Sebastian, still no pole for you in Barcelona. What is it about this place?
SV: I think today we can be very happy. Mercedes was too quick, both Lewis and Nico. So, I think we can be happy with the result, as I said. Historically, I didn’t really like the last sector and the new corners they implemented a couple of years ago. This year it seems to be that, for the first time, I found a better way around, after trying so many times – which is quite funny if you think that we come here more than once a year. So, I’m happy with that. And for tomorrow hopefully I can prove statistics wrong. I know it’s very important to start from the front row. We just missed it – but I’m confident for the race. I think this year will be a lot about tyres. Nico touched on it earlier. I think generally everybody is suffering quite a lot, so let’s see if we can make our strategy work and have a fast race from where we are.