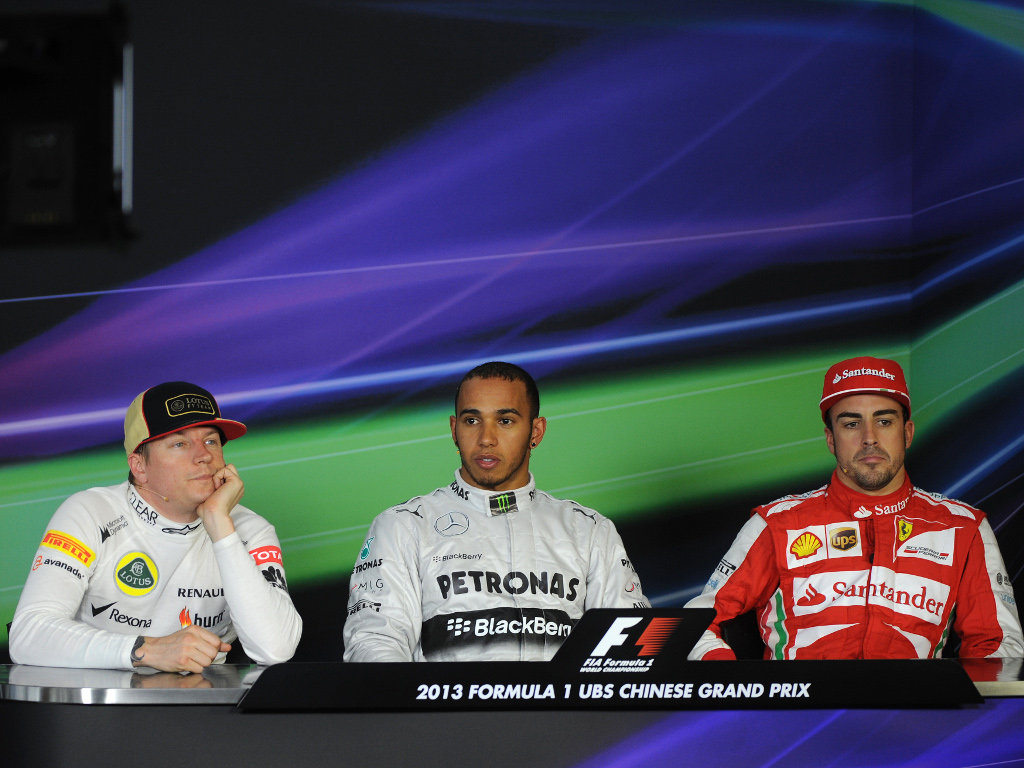 Q: Lewis, a fantastic, last-minute shoot-out for pole and you won it for your new team.

Lewis HAMILTON: Yeah, an incredible feeling, so happy to have our first pole for some time. I’m just ecstatic really. The lap was great. The team performed well all weekend so far and I hope that we can carry that into tomorrow.

Q: And quite a margin too.

LH: Yeah, really surprising because obviously in P3 the Ferraris were very, very quick – didn’t know where they’d be in qualifying. Obviously we had really good pace for Q1 and Q2 but that last lap is so difficult to get. Obviously in qualifying we had 10 minutes but we left it down to right to like three minutes to go or something like that. You’ve got to get the perfect out lap, you’ve got to do the perfect lap to get yourself up there and I really can’t complain about the laps, so I’m really happy.

Q: Kimi, you held pole briefly but you were just pipped by Lewis.

Kimi RAIKKONEN: I think the gap is quite big still and we don’t have that speed right now. So, second is not bad, I think it’s the best that I’ve been with the team ever. Not too bad, but of course you’d rather be in first place but I guess we don’t have the speed. I think we are missing downforce in the middle sector a bit, but we’ll see what we can do tomorrow.

Q: Great speed from Ferrari we’ve seen today as well, with Felipe and then you this morning and now third on the grid this afternoon Fernando. Are you happy with that?

Fernando ALONSO: Yeah, very happy. I think the weekend has been very good for us. The car felt completely different Friday. This morning we made some changes and the car is responding well and I think we have a good set-up for the race as well, which is more important than qualifying always and I think tomorrow if everything goes well we should be able to fight for the podium, hopefully with both cars, so this is good news so far for the team.

Q: Back to you Lewis. You’ve won this race twice already but tomorrow could be a real tactical race when it comes to the tyres.

LH: Yeah, these tyres are very tricky this weekend. Making the option tyre last is almost impossible so it’s probably going to be quite a short stint at the start. But everyone has the same… except for this guy on the right [Raikkonen]. He seems to be able to look after them a little bit better than most people. Still, I think we’ll have a competitive race. We’ve got good race pace so I expect a really tough race but I hope that we can maintain position.

Q: Lewis, you mentioned yesterday you weren’t particularly comfortable in the car. Were there a lot of changes that really worked overnight?

LH: Yes. Just generally this season being in a new car, just getting the car optimised to your feelings. For me I was struggling a lot on the brakes, losing a lot of time on the brakes, even the last couple of races and so made a bit of a breakthrough there with some improved braking system, so I’m much happier with that area – but there’s a couple of other areas with the setup and really there’s so much more information than I probably even expected that I need to get on top of, and I’m still learning as I go on.

Q: How much was it the team hitting the ground running, having led here for the last two or three years, winning last year etcetera? How much data was there that they were able to just go straight into this meeting with a lot of data, a lot of knowledge.

LH: I don’t really think that’s affected us. I think the knowledge we’ve had and the experience from the last two races really is what mostly counts with where we’ve put the car. I think obviously last year they had a very competitive car here but at least from what I’ve seen, none of last year has really come into this year. Of course the car is competitive, as it was last year, so that’s a big plus for us and I really hope we can maintain the kind of pace that we have today, going into tomorrow.

Q: Kimi, updates on the car – how much have they worked?

KR: Erm… We have very small update. The car, I would say, is almost the same as it was in the last races, or the last race. It seems to be working OK. We have some issues with some stuff but bit similar story than in Malaysia but we choose to take than chance now and we know that car works the way how we want to run it but it’s not easy to keep it on that order or in that setup all the time. It’s been a pretty tricky weekend to get things exactly right. It’s very sensitive but we’re happy to be where we are now so hopefully it helps us in the race a bit.

KR: I don’t know really. We only used the soft once in qualifying and the car wasn’t the same this morning as it is now so it’s a bit of a question mark because the things that I’ve just told, that we have to play around a bit with the car. I think it should be… went pretty OK yesterday so should be OK. I don’t know if it’s good enough to fight for a win but at least today we put ourselves in a pretty OK position.

Q: Fernando, it almost seems as though there were a lot of updates on the Ferrari and it was a matter of choosing the right ones. How difficult a choice was that?

FA: Not too difficult I think. Friday you test some new parts. Some of them, they work as you expected and you put on the car for the rest of the weekend. Some of them they’re not working as expected and they’re a little bit worse than the previous ones, so you remove it and you make some modifications for the next race or the next time that they go in the car. So, is a normal job for Fridays and obviously we brought here some new parts and as we said now, some of them are positive, some of them were not so positive so we need to keep working on that if we want to have the pace of the leaders. Especially in qualifying: on Sunday normally the pace has been good in the first two races. It happened also last year: normally we improve on Sundays. But definitely for pole positions it is not, at the moment, perfect.

FA: We have no big issues with any of the tyres to be honest. Obviously the soft, they degrade much more and they will last not too long but in the long runs we did nothing that was surprising us, let’s say. Hopefully we can have a good race, a clean race and be on the podium at the end of 56 laps.