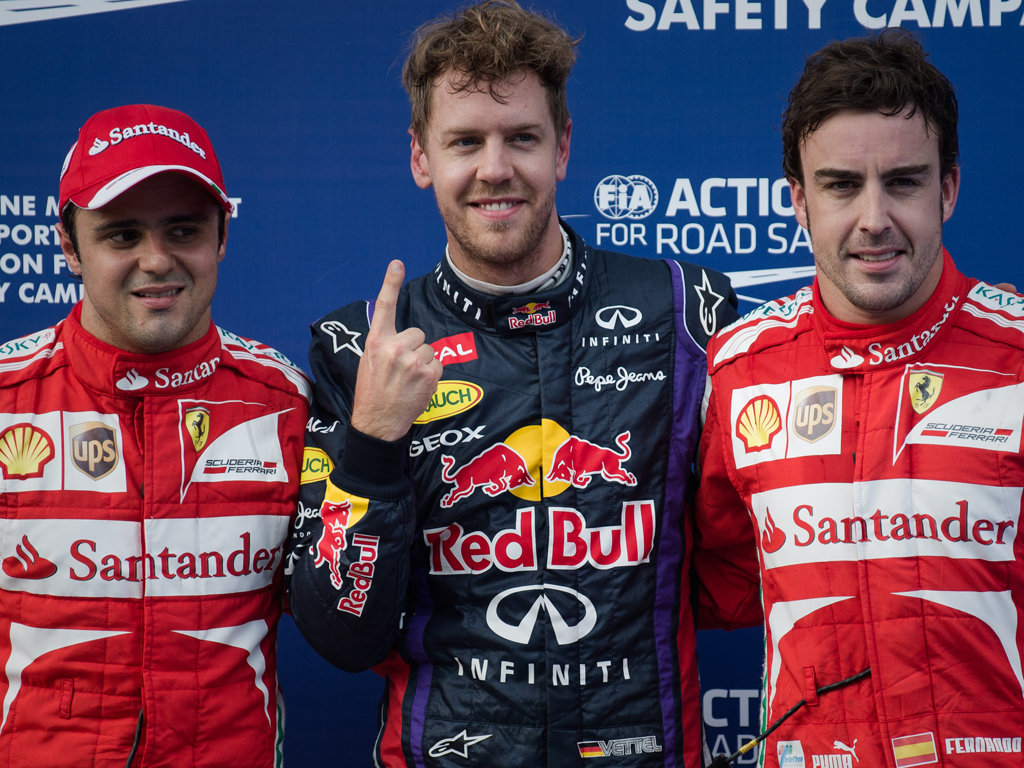 Q: Sebastian, a late call for a second set of intermediate tyres in Q3 and it worked out well for you.

Sebastian VETTEL: Yeah, I think generally an interesting qualifying session. We knew that rain was the on the way and then… to be honest we expected already some [rain] at the beginning of qualifying but it didn’t come, so going out on dry [tyres]. Obviously I think we had a bit of a different approach to other people. Q2 was quite on edge I would say, so probably the rain helped us a little bit. Otherwise I think we would have had to go out again. But in that case it was just enough to go through to Q3. Then in Q3 with the circuit drying, it was clear it was better to change tyres. We confirmed that pretty early. I think we did the right thing. Very tricky because you don’t know if there’s more rain coming or not, but we took the decision. Bit surprised by the gap but a decent lap and I was very happy obviously. It was quite tricky because some parts of the track were still wet and others were dry but overall a very good session for us. We managed to save some tyres, which could be crucial tomorrow, so we’ll see what we can do.

Q: Felipe, ahead of Fernando on the grid once again, as in Melbourne. Ferrari [look] good in the wet, did the rain help you?

Felipe MASSA: Well, I would day maybe yes. I don’t know if we were able to be second and third in the dry as [there were] some other quick cars, like Webber, Kimi, maybe Mercedes as well. So I think it was a good qualifying for us. We took the right decision at the start to change tyres and managed to put a good lap together as well. I think maybe the rain helped a bit.

Q: Fernando, in third. You won here last year obviously and you’re in the top three on the grid now. What’s your approach to the race tomorrow?

Fernando ALONSO: Try to do a good race and try to score as many points as possible. We are not sure about the performance, the car in race pace. Obviously every long run we do is a little bit inconsistent – sometimes we are OK, sometimes not – and we need to see tomorrow how the race goes. We did not have big problems in the long runs on Friday. In Melbourne the race pace was OK, so no reason not to be optimistic for tomorrow. But we’ll see what we can do.

Q: Sebastian, back to you. You went from pole to third in Melbourne, what’s the story going to be tomorrow?

SV: Well, I think if you start in the front you always want to finish there as well. Obviously as Fernando touched on, it will be a long race and difficult to know the true pace. We confirmed more or less what we saw in Melbourne. I was very happy with the balance of the car once again. I think also considering where we were last year here, a big step forward. But these days racing is a little bit different. Hopefully we’ll find the right amount of percentage less than 100 per cent to start the race tomorrow. Managing the tyres will be crucial and then we go from there. We know the pace is there so hopefully we get to the chequered flag in the same position.

Q: Sebastian, in Q1 it looked like you were trying to not take too much out of that set of tyres, so that you could use them again in Q2, and you ended up 15th. So, were you living a little dangerously? Was your heart beating a little faster than normal?

SV: Yeah, obviously it’s difficult to know how quick you go if you don’t try to go 100 per cent – which I think it’s fair to say that we tried that. Yeah, was quite tight in qualifying, I think, in dry conditions. And across the line I knew that maybe it’s not quick enough but it turned out to be just OK. Obviously we were running quite late and we could see if other people… well I couldn’t but the team could see if other people are going quicker. And once it was enough we obviously came in to save the tyres because we used them again in Q2 and it was just enough to get to Q3. Obviously there was a bit of rain on the way and I had a little bit of rain on the track as well. I don’t think it really slowed me down, for cars that came after me I think it was a little bit more tricky up to a point where it was just too wet for dries. So once it was clear the rain got worse, it was also clear to us that our plan worked out with a little bit of help from the rain. Good to save the maximum amount of tyres possible.

Q: A number of teams had problems with weather radar during the course of the session. Can you confirm whether you at Red Bull have some extra set-up, some individuals that are placed around the circumference of the circuit that are giving information, or do you have any additional information.

SV: Well, I think we use what everyone is using, so mostly referring to the radar – which we know sometimes is very accurate and sometimes is not. To be fair, in this place, I think it’s very tricky to be very precise because the weather changes so quickly. Also, considering the amount of rain that comes down and the circuit not really changing, it’s quite impressive, which I think is related to just this place, high temperatures etc. We saw it yesterday during practice. The rain came down and there was steam on the track. I didn’t have an effect for a long time, until it rained hard and then obviously you have to come in and change tyres. So it was similar in that regard but in terms of what we do, I think it’s more or less what other people are doing as well.

Q: Felipe, in terms of the information you were getting about the weather, can you track your thoughts through the course of that qualifying session and how you thought it was progressing for you?

FM: I think it was pretty good. Even on the… we go out, I did one timed lap and it was a pretty good lap straight away with the conditions, which was more water on the track. And then I stop, I change the tyres, looking at many people stopping as well. I go out with a new set, track was already quicker because already the dry line starts to appear. The rain was a bit less, so even in one lap you find a completely different track, so the track was much quicker. I managed to put a good lap together. Even if already I have a bit of graining in my first timed lap because the track was too dry maybe for the Inters. So, maybe I was suffering a little bit on the second and the third sector – but I mean maybe everybody was having similar problems. Anyway, the lap was good, so it was a good start for both of us. I think maybe since a long time we don’t start both cars with a good pace as well in the top three. I think it’s a good job for the team as well. For the team that was preparing this car in the winter as well. So, I’m really looking forward for the race tomorrow. It will be a difficult long race. Anything can happen with degradation, with strategy, with rain. But let’s concentrate to do the best we can