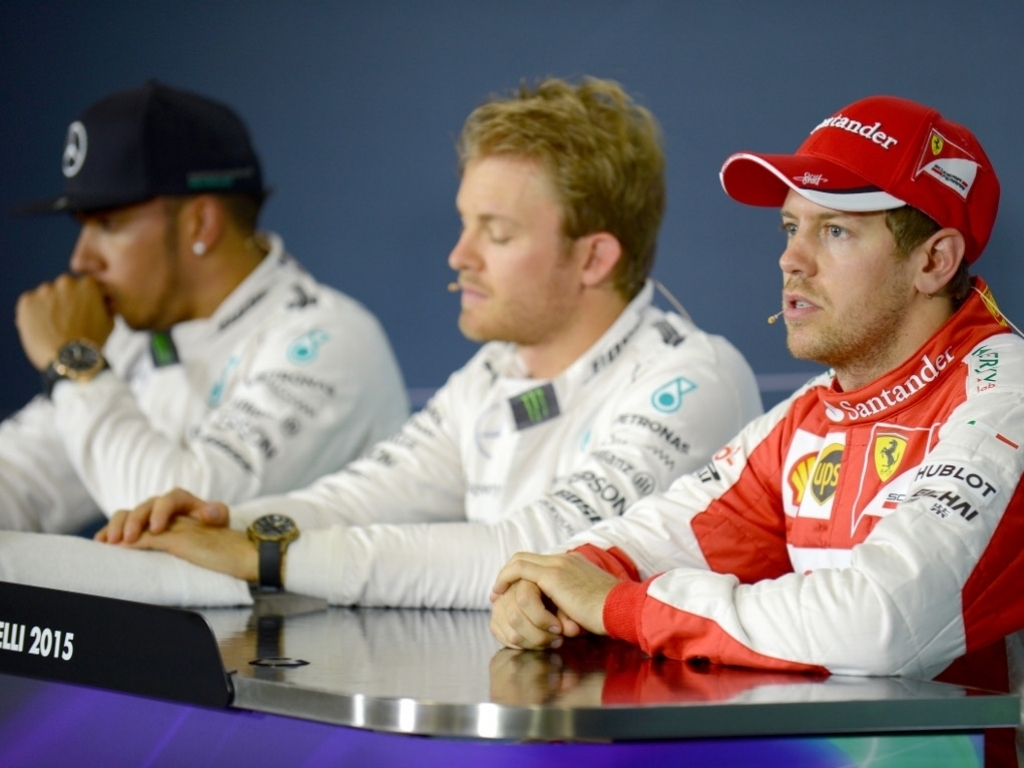 Nico Rosberg, Lewis Hamilton and Sebastian Vettel faced the media in the wake of the Spanish GP qualifying…

Q: Nico, first pole of the year. Is it fair to say you needed that?

Nico ROSBERG: Well, of course. Of course I needed it sooner rather than later that’s for sure, that’s for sure because it’s just one step in the right direction to winning the race here this weekend. Yeah, it was a good day in the office for sure.

Q: Well done. Lewis, a little spin this morning and looked like you were slightly on the back foot in the later part of qualifying. Why was that?

Lewis HAMILTON: I don’t think I was on the back foot at any other stage. I generally didn’t have the pace today. Nico did a great job and generally I don’t know if I really had the balance where I like it. I did my best with it and I think tomorrow there’s still a lot to play for.

Q: Thank you for that. Coming to you Sebastian, obviously third place again up amongst it here at the front of the grid. Race pace looks strong but would it be fair to say you’re a bit disappointed with the margin to the Mercedes today after all the development work?

Sebastian VETTEL: Well, I think disappointed is the wrong word. I think it’s great to keep confirming that we are right behind. Obviously we would have loved to be a little bit closer, especially for this race as in a way this is a home for us with one of our main sponsors, Santander, so yeah, I think we should still be in good shape for tomorrow. I hope for a good race. But you have to say that those two guys are doing a good job. They are quick. They have been very quick here in winter and I think they confirmed that so far. So I hope tomorrow, as I said, we can be a bit closer but we will see.

Q: Thank you. Back to you Nico: the three of you were the only drivers that managed to save a new set of medium tyres for tomorrow’s grand prix. The races have been strategic and tactical so far this year. Are we to expect more of the same tomorrow?

NR: Yeah, definitely. Strategy is going to be important and it’s a big advantage to have an extra new set of tyres for tomorrow’s race so it’s good to have that. Of course overtaking is also more difficult at this track so starting in front is a particularly big advantage here.

Q: In Bahrain you were saying you had made a mistake because you had not pushed in Q2 because you were thinking about the race. It was very obvious today that in Q2 you pushed much harder, clearly thinking about pole position. In fact you did two laps that were good enough for pole today.

NR: For sure, yeah, Bahrain was still in my mind and I wanted to make sure that I don’t do that mistake again. I just got myself in the rhythm in Q2 and it worked really well for me today.

Q: Lewis, was it the opposite the case for you. You were sixth tenths behind in Q2, which looked as though you had been thinking perhaps more about the race tyre set you would be using from Q2 to Q3. Did that have any impact on finding the limit in that session that impacted your Q3.

LH: No, I just got some traffic on my lap, I was stuck behind one of the McLarens, so it didn’t really make any difference to my in-lap.

Q: Thank you for that. We mentioned, Sebastian, your long run performance yesterday. What was striking about it was that it was long, on the medium tyre, and consistent, but not massively quick or not quick enough to be able to think you can challenge these guys tomorrow?

SV: Well, being realistic they are quick. They are not on pole and second, the first row, for tomorrow by chance. They showed I think in every single session this weekend that they are very competitive with either tyre. So I expect them to be very strong tomorrow. But, of course I hope that we can be a bit closer. The past races we were a bit closer on race pace but, as I said, being realistic it will be difficult to beat them

Q: (Peter Farkas – Auto Motor) Sebastian, you have a lot of new parts on the car this weekend, as most other teams have. Did you hope to get a bit closer to Mercedes or do you still hope that these are circuit characteristics that don’t really suit your car?

SV: Well, in general, I think our car was fine on any circuit this year so I don’t see a reason why it shouldn’t be the case this weekend. Yes, we would have hoped to be a bit closer but the weekend is not over yet for a start and also in the past… and usually this is quite a good indication of how quick your car is, we know we still have something to do. Obviously everybody has been pushing. I think we made a step forward so I’m looking forward to the race and looking forward to the next races. Maybe one race is not enough to confirm everything but, as I said, happy that we are still where we were for a start and hopefully we can be a bit closer tomorrow.

Q: (Luigi Perna – La Gazzetta dello Sport) Question for Seb. Seb, anyway the difference – the gap – compared to Mercedes seems to be bigger compared to the last races. Are you disappointed for that or you think it can be better in the race?

SV: I hope it’s going to be better in the race. I think we expected them to be very, very strong here because in winter testing they’ve been very, very strong. I’m sure they have improved their car since then – but I think the conditions are completely different so we will see. It’s true that the gap is there, the gap is probably a little bit bigger than it was the last couple of races. I don’t think that’s down to one thing only – I think there’s always a lot of things you throw in the bag and maybe we are struggling a little bit more this weekend. I’m looking forward to seeing where we are tomorrow and then you can ask me again – hopefully.

Q: (Livio Oricchio – GloboSport.com) Sebastian, do you think we can have a repetition of the Malaysian Grand Prix where you had a great advantage in the tyre wear and it also explained your victory there. Here the tyre wear is very high also…

SV: First of all, apologies, it comes with a red suit, those two guys, they haven’t asked me a single question in the last four years! I think it’s a different weekend. We have the same tyres, it’s correct, but it’s a completely different circuit as well. I think potentially the tyres are not working as well as they used to in Malaysia. It looks like Mercedes have a bit of an edge and are more comfortable on both compounds, compared to us. So, we’ll see what we can do in the race. Hopefully, as I said many times, we’ll be a bit closer.

Q: (Laurentzi Garmendia – Berria) To Lewis, Barcelona is a track known to be quite difficult to overtake. Does it make the start for tomorrow especially… to put an effort in at the start?

LH: Probably. Yeah, it’s always one of the opportunities. You have that and some of the pitstops. It’s very, very difficult to overtake I think, as it’s shown and proved over the years. I haven’t even started to think about that yet.

SV: Very simple. We didn’t have the best day yesterday I believe. We both were not entirely happy with how the car felt. I think, as I mentioned before, it was probably tricky conditions this weekend, quite windy, I think the tyres are not working for us as they maybe used to. So, we were not sure about where we were and we decided to split the cars for today.

Q: (Peter Farkas – Auto Motor) Lewis, could you please explain why did you feel the need to go out again at the end of Q1? Did you try something new with the setup still? And what about your spin in P3. What was behind it?

LH: Touched the Astroturf in P3 and then in Q1, that was the team’s decision.

Q: (Flavio Vanetti – Corriere della Sera) To Nico. How important is the boost from the psychological point of view, having the pole position today?

Q: (Christopher Joseph – Chicane) A question for Nico. What mindset will you take into the race tomorrow that’s different from the season so far?

Q: (Livio Oricchio – GloboSport.com) Question to Lewis. Consider the advantage that you have in the championship, do you consider to start the race already racing for the championship or do you…

The question is if you consider to take more risks or because of the advantage you have, you maybe drive more carefully?

LH: I don’t think so. I think I’ll drive the same as I did last year. Seemed to do me quite well.