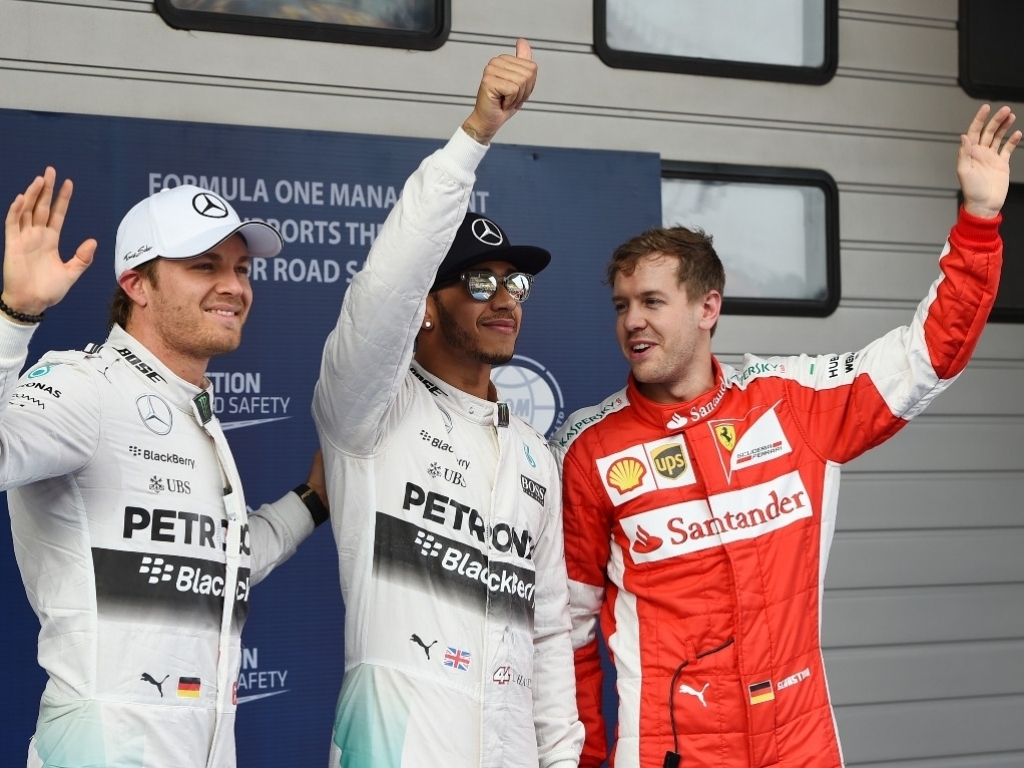 Pole-sitter Lewis Hamilton was joined by Nico Rosberg and Sebastian Vettel in the post-qualifying press conference in Shanghai on Saturday.

Q: Lewis, quickest in both sessions yesterday, quickest again today in all sessions, it’s looking pretty good for you this weekend?

Lewis HAMILTON: Yeah, I think China’s continuing to be generally a good circuit for me, and a very, very positive vibe here. The car’s handling fantastically well this weekend, a lot better, in terms of the whole weekend, compared to how it was in Malaysia. At the end of the day this team continues to do an amazing job. The guys back at the factory did a great job to kind of regroup after the last race and bring some improvements for this weekend and I feel very grateful for that.

Nico, we heard you on the radio at the end there sounding frustrated. Did you think pole was there for you today?

Nico ROSBERG: Definitely, yeah. When it’s four hundredths, it’s nothing, you know. So I was frustrated, I am frustrated, yeah, because it’s so close and of course I would have wanted to have pole today.

Sebastian VETTEL: Well, first of all, happy with today I guess. I thin it was a, yeah, different strategy we had in Q3, going only once, on a new set. Obviously these guys were a bit quicker than we expected to be honest, but yeah I think P3 was our maximum today. For tomorrow I think we should be a bit closer. How close we will find out. Definitely looking forward to going racing, and hopefully go race them tomorrow. It’s not very far to turn one, so I guess that’s fairly straightforward, but it’s a long race and tyres are very important here. Obviously we try to do well and get a lot of points.

Q: Just back to you Lewis, what lessons were learned from Malaysia that the team has brought into this weekend?

LH: I think there are too many to mention but obviously it wasn’t the tidiest weekend for us. But more so, for me and my guys on our side of the garage, we just tried to get our full programme and fortunately we didn’t have any problems so far this weekend and that’s a big step for us. But obviously we’ve got a tough race ahead of us tomorrow. Nico’s very quick and also the Ferrari’s are very good still, with their long-run pace, so it’s not over by all means.

Q: Lewis, this has always been a great track for you, you’ve got a good record around here – what is it about this track, do you think, that suits you so well.

LH: People keep asking me that. I don’t really know. Have you seen the banners that I have here? The support I have here’s pretty unreal. Otherwise… I don’t know. I just like the track. I guess it just naturally suits – a little bit – my driving style as opposed to other circuits for me. And one that I generally just really enjoy driving. It’s a tough circuit, it’s got a great combination of corners and the race is a good challenge.

Q: Nico, four one-hundredths of a second the difference today. You’ve had success around here as well. Where did it get away from you today, do you think?

Q: Sebastian. Mercedes have saved a set of tyres for the race tomorrow, obviously their concern after what happened in Malaysia. How do you win this race tomorrow?

SV: I think so have we. We’ll see. I think we knew that it will be tough today in qualifying to be really, really close. I think Q1 but then especially Q2 looked quite promising. In Q3 I think it was a bit what we saw in practice, so quite a large gap. For us we’re fairly happy to make sure we are right behind them. Obviously we want to close the gap. Maybe tomorrow we are a bit closer, but for now I think we can be reasonably happy. Bit of a shame not to get both cars in the second row. As I was told, Kimi was a bit unlucky on the warm-up lap. Yeah, tomorrow’s race though, we should have good pace, so we’ll see what we can do.

Q: (Niu Hong Lin – China Radio International) Lewis, you’ve been nominated by the Laureus award and the ceremony would be on Wednesday so we do not really expect you to show up as you have a race soon after. So do you have anything to say about that, and maybe especially to Chinese fans?

LH: Definitely. I feel very proud and kind of honoured to be one of the nominees. That’s very cool. I don’t think I’ve been nominated many times if any. I think perhaps maybe one year, many many years ago, so… It’s a very prestigious event and I’ve got to witness many other great athletes win it, so I’m just grateful to be in amongst a great group and regardless of if I do or don’t win.

To the fans, they’ve been amazing. Every single year I come here… I couldn’t imagine it growing but there’s more and more people I get to see and the flags, the support is just… it’s almost like it’s my home Grand Prix, so I really do appreciate it.

Q: (Michael Schmidt – Auto, Motor und Sport) Seb, did you chose this tyre strategy because it looked like you could have gone through on a hard set of tyres through Q1?

SV: I disagree. I think it was probably possible but very very close. If you don’t make it, you start the race tomorrow from P16 or P17, so I think that’s why we decided to do that and if I’m right, I think everybody put on the options in the first part of qualifying. I’m not sure about those two. They didn’t? Then they were just quick. Obviously we tried to save a set for tomorrow and hopefully we can be a bit closer in the race.