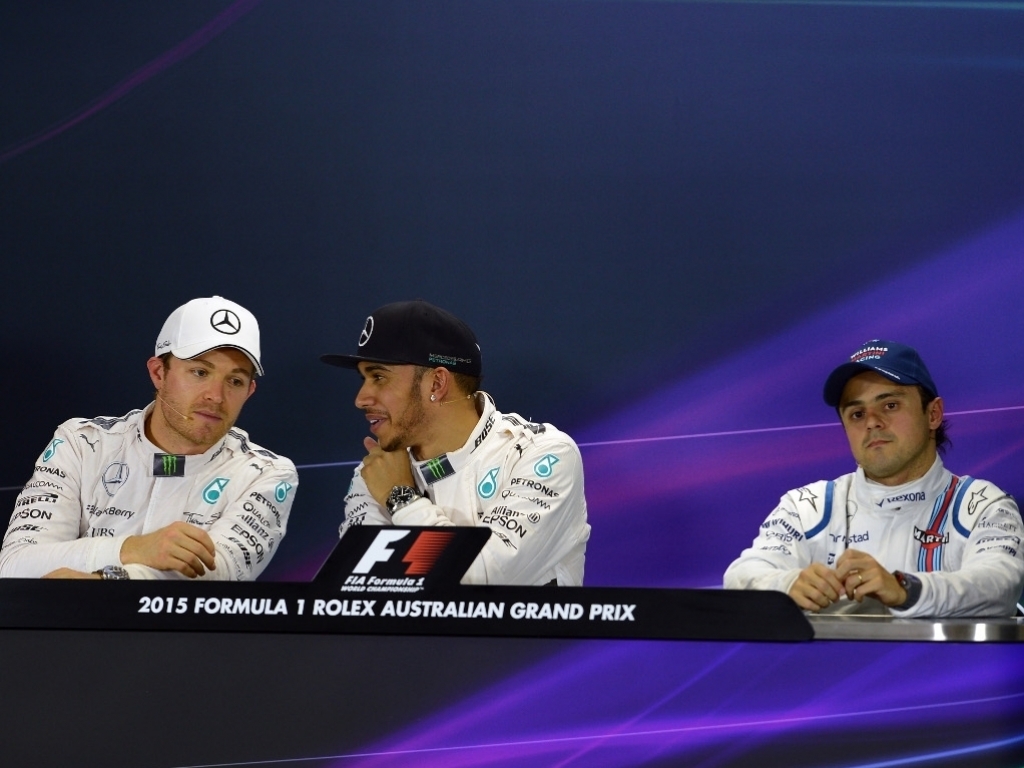 Q: Lewis, it’s always good to start the year with a pole position no doubt, tell us how you did it and particularly by the margin with which you did it?
Lewis Hamilton: Well, it’s been a great start to the weekend. It doesn’t feel like it’s been a long time since the last race we’ve already had and a big rush and a huge effort from all of the guys back at the factory to enable us to come here and have this performance, so I feel incredibly blessed to have this car. And then today we found a good balance and today was just about pushing those laps. It’s so much fun when you get into qualifying, you have those single laps which you have to push. So I’m just massively grateful for all the hard work that’s gone in.

Q: Very well done. Nico, coming to you, obviously not really your day today. You mentioned on the radio in Q2 that you had an engine cut-out issue and you had a lock-up in Q3, what was the story of your qualifying?
Nico Rosberg: The story was that… well, first of all Lewis was in impressive form today, he did an awesome job and nailed it all the time. And then, for me, the speed was there but I just didn’t get it together today. So it wasn’t a great day today. But of course I’m really thankful to the team for the car that they have given me – it’s unbelievable. It’s a pleasure to drive and it’s a pleasure to be in this situation with this team. That’s really great to see where we are again now – leading the pack. P2, I have to live with that today, still a long day tomorrow anyway and we still have all the chances.

Q: Very well done. Coming to you Felipe. It’s been a very close battle all weekend with Ferrari for best of the rest status behind the two Mercedes and you personally definitely saved your best for last?
Felipe Massa: Yeah, it was a very tricky qualifying, especially when you have four cars fighting for very similar times, all the time. So if you see the difference in the lap times between me, Sebastian and Kimi and also Valtteri, it’s pretty small. But I’m happy. I’m happy that I did a good lap. It was the best lap of the day, the last one, which was not so easy, especially with the wind changing. It’s so easy to have front locking in corners that I had – not on this lap – so maybe I just prepared everything for the last try and it worked. It worked pretty well and we’re there. It will be a big fight tomorrow with Ferrari especially but I hope we can do a good job.

Q: Coming back to you again Lewis. As we mentioned, it’s your fourth time on pole position here in Melbourne but you haven’t won here since your first championship year of 2008. Clearly some unfinished business tomorrow?
LH: Well, we had a difficult season last year here, so definitely as a team, as a whole, we’re hoping for a better start, for both cars to succeed tomorrow. So we’re going to work as hard as we can to make sure we do that and lots of work to be done tonight for the race tomorrow, because that is going to be a huge challenge still and obviously a good fight, hopefully, with Nico.

Q: Lewis, last year you converted six of your seven poles into victories. Can you tell us what the secret is of making that happen? Obviously a good start strategy – but what is the real secret?
LH: I think there isn’t a real secret. It’s hard work in the evening before and on the day just really understanding the strategy, understanding your limitations and strengths. Fuel, tyres, diff settings, all of those things. You need to be able to juggle those and obviously you all need to be on form as a team and capitalising on the opportunities that you do have. Sometimes it works, sometimes it doesn’t. You try to make it the first one more often.

Q: Nico, one of the things that was really noticeable about that qualifying hour was how much the temperatures dropped from the beginning to the end. It got a lot cooler and the wind was gusting quite a lot. How much do you have to adjust yourself, and in the car?
NR: It was difficult because the wind, again, had changed from the session this afternoon and so it was just different again. And it really has a big impact on the car so we all had to adapt again to it. And that’s why it was particularly difficult out there. But my balance was good and the car was really good.

Q: Felipe, it’s clear that Williams have picked up where they left off at the end of 2014 in terms of qualifying pace – but how are you feeling about the race pace?
FM: I feel good. I feel that I still… in the race we can do a good job. Definitely the fight is really tough with Ferrari. We are in the similar pace, it won’t be easy, the race against Ferrari but I think we are there. We are there in the right and I’m really looking forward that we can start well the season with both cars and I really hope what’s happened in the last race of the season we can repeat straight away. Would be great.

Q: (Dan Knutson – Auto Action) Felipe, as you say, a great start to the season. Do you see in the next couple of races the car making even a better improvement from what it is now?
FM: Yeah, I hope so. We’re working for that, working to improve the car, working to try to bring as many upgrades in the parts, working as close as we can with Mercedes to see if we can also get some improvements on the engine as well. So it’s definitely just the start. We know how much we improved last year and we really working and we need to try to repeat the development we did last year from the first to the last race but even more intense. So that’s the work I’m doing together with the whole team. I’m really looking forward that we can do that.

Q: (Michael Schmidt – Auto Motor und Sport) Felipe, P3 is good on the one hand, on the other hand, there’s 1.4s to Lewis. How much of a worry is that? It seems to be a bigger gap that last year even?
FM: Yeah, it is! They’re in different categories. They’re in the same category between them [Lewis and Nico] but in different categories between the others. For sure it is not great to see this difference but we keep working, we keep fighting and I hope we can get as close as we can.

Q: (Chris Medland – F1i.com) Question for you Lewis. I know before this weekend you were saying it wasn’t that important to get off to a much stronger start, it’s a long season, but now you’re on pole position it’s clearly going to be a two-horse race tomorrow. Is it crucial that you don’t have a race like last year where you failed to score?
LH: Similar to what I said yesterday really, it wasn’t that I said it’s not important, it’s just that last year showed that even though I didn’t have a good first race, that it wasn’t the end of the world. But, of course, the plan tomorrow is to have a better start to the season – and today’s the first step in that direction.

Q: (Vincent Marre – All Race) Felipe, which team is Williams fearing the most: Ferrari now or Red Bull?
FM: Well, I think Red Bull is not really there for the moment. I’m sure Red Bull will get there because they are really strong. We know last year that they finished in front of us. The rules are similar this year so I’m sure they’re going to come, but for the moment Ferrari is really strong and they made a big step forward compared to last year so I’m sure tomorrow we need to be a bit more worried about Ferrari but we need to keep our eyes open for Red Bull and even for the others.

Q: (Paul Gover – News Limited) Nico, the margin to Lewis today is fairly substantial. Do you think that you will be able to close that down tomorrow and turn it into a proper race?
NR: It’s not indicative of the pace difference. For sure Lewis was quick but I didn’t get my laps together today so I’m not too worried about pace – I’m not worried about pace at all to be honest. But the race is always a different thing so maybe I can even turn it around tomorrow. On Friday, in the long runs, my pace was very strong so yeah, hopefully it can be the other way tomorrow. I’ll definitely give it everything and put on a good show for everybody.

Q: (Ralf Bach – Sport Bild) Nico, do you think it’s easy to overtake here?
NR: The tyres are going to make the… (they’re) my opportunity or the start but also the tyres because if the temperatures drop like they did just now, then with the soft tyre (there) could really be a big problem with the graining so that’s my chance.

Q: (Paolo Ianieri – La Gazzetta dello Sport) Nico, did you have a problem with the engine in Q2?
NR: No, no. It’s fine tuning. I cannot say I had a problem. It’s more things here and there to perfect everything.