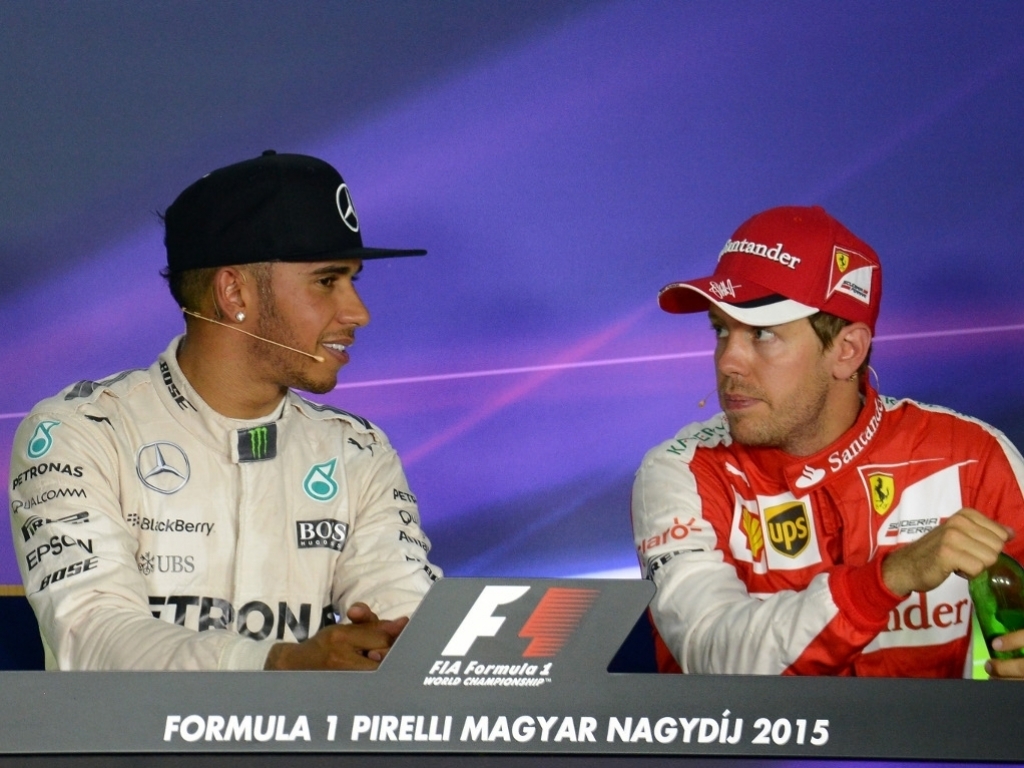 Q: So Lewis, your fifth pole here in Budapest, quite a big margin over your team-mate, you must be very happy with the way today has turned out – you’ve been fastest in every track session this weekend?

Lewis HAMILTON: It’s been a good weekend so far, yes. I think coming here I’ve always had, generally, good experiences here, but loving the weather, loving the city. But also… I love the track. It feels a bit like an old go-karting circuit that we used to race on many years ago when we had super special soft tyres and super grippy, you know, and I think with the temperatures it gives us a lot of grip here. But me and Nico wouldn’t be up here if it wasn’t really for this team. They've done an exceptional job all year long but just to improve coming into this weekend, you can definitely feel it, so big thanks to them.

Q: Well done. Nico, talking about the margin, it was close early on through the weekend, it was pretty close between you but in the later stages of qualifying it just seemed to grow. What was the story from your side?

Nico ROSBERG: I don’t have an explanation. Qualifying went pretty much to plan, everything, but just didn’t find the pace and it’s been a bit up and down all weekend for some unexplained reasons, so just need to look into it tonight. Definitely not happy with the way it went today.

Q: Ok thank you. Coming to you Sebastian, obviously not the best practice sessions for either you or the whole Ferrari team but it looks like you managed to turn it round when it really mattered for qualifying. How did you do it?

Sebastian VETTEL: Yeah, it’s true, we had a difficult day yesterday, let’s say, with something stopping us, slowing us down and it was difficult to get a feel for the car. So, for today, I’m glad that we found direction, we went and took it a little bit easier, trying to build it up in FP3, which worked, and then throughout qualifying the car kept coming to us, kept improving. I think third is the maximum we could do today, so we can very, very happy, especially with the rough start to the weekend and now obviously hoping for a good race. Who knows, on this track usually there are a lot of things happening on Sunday, so maybe we can do something against these guys, but I expect a tight race also to people behind – to the Williams and the Red Bull in particular.

Q: Thank you and coming back to you Lewis, perhaps surprisingly on a track on which it’s quite difficult to overtake, the race isn’t always won from pole position. In fact, in the last ten years you’re the only person who has managed to do it, so being on pole at this stage is not necessarily a slam dunk; plenty of work still to do tomorrow.

LH: Absolutely. The work’s not always done on a Saturday, I’ve got lots of work to do tomorrow but in terms of how the weekend has gone I’m incredibly happy with that. I think it’s so far been one of the best… I can’t remember having the performance I’ve had this weekend on any weekend, so I’m really happy with that. There’s a long way down into Turn One and the race is incredibly tough physically but also technically for the car, but I feel confident in my team and my car and hopefully we can convert it tomorrow.

Q: Lewis, you’re obviously feeling on top form this weekend, so you’re obviously happy about that. How important is it to go into the summer break as the guy who won the most recent grand prix, to have that period of reflection knowing that you ended that first part of the season on a high?

LH: It’s not really what you think about, to be honest. There’s been times when I’ve not won, gone into that break and you manage to switch off and enjoy it just as much. So, of course, when you leave, having done what you planned to do, it makes a next few days following – but other than that, you get over it and you move on and do whatever you have to do, and train – but I’m taking all the steps possible to make sure it’s a nice summer break.

Q: Question for you Nico on the strategy. We mentioned earlier on that it’s not always won from pole, this race. In fact the top three is normally where the winner comes from, so still plenty of chances for you in the race and clearly strategy is going to be part of that. It looks to me as though you both saved a set of new soft tyres – you reused a set for your first run in Q3, is that correct? What advantage does that give you?

NR: I don’t think I saved a set, no. Not this time no. But I’m not 100 per cent sure! It was a bit all over the place, the qualifying. But strategy, yeah, there’s going to be some opportunities, definitely, also in terms of strategy. Let’s see. Going to go into that tomorrow morning. Strategy is discussed tomorrow morning. But anyway, car-wise, if anything, my balance is for the race – which is not what I wanted but it’s the way it’s gone.

Q: Sebastian, I think it’s the seventh time you’ve qualified in the top three in the first part of the season but, as you mentioned earlier on in your previous answer, it’s not been a weekend without problems for Ferrari – so maybe you could tell us a little bit about what you were dealing with as a team – and also, how come, despite so many strong qualifying performances, you’ve never managed to win this race.

SV: Yeah – because I never managed to cross line first on Sunday! Yeah, it’s a great race and a definitely want to win it – hopefully tomorrow– we’ll see with a bit of luck. Obviously in normal conditions it’s difficult to beat these guys. But as you touched on, I think it was a great recovery from a very, very bad day yesterday where we had issues with the car. Obviously Kimi had the wing failure in FP1 which caught us out also a little bit in FP2 and then, yeah, just things slowing us down. And on top of that the balance and the rhythm wasn’t there. So, not a great day and not that easy to recover but spent a lot of time last night trying to clear up the situation and fortunately it worked. We started off on a much better foot this morning and obviously were able to carry that into qualifying. We knew it will be tight, especially with Red Bulls as they showed very, very strong pace yesterday but we managed to stay ahead – so that’s good for today but for tomorrow obviously there’s a big job to be done. We focus on the race, trying to defend that third place and, as I said, I wouldn’t mind if I could turn your question around and answer in a different way tomorrow.

Q: (Peter Farkas – Auto Motor) Sebastian, I think it’s predicted that tomorrow it will be about eight to nine degrees cooler than it is now. How do you think that will affect your performance, keeping in mind that Ferrari usually goes well in the hot weather, and also how confident are you that you will be able to stay ahead of the Red Bulls in those conditions?

SV: Well, I considered it hot today – 37 or 36 degrees – so I still consider 28 degrees to be fairly hot. I think in England they would call it a heatwave. (It’s not that bad, it’s bit better in the summer). Overall, I think it’s still hot tomorrow. We’ll obviously see what the weather does but I think it should be fine.

Q: (Peter Vamosi  –  Vas Nepe) To all of you, the strange thing here in Hungaroring is if Lewis Hamilton wins, Kimi Raikkonen is always second. What do you think about that?

LH: I don’t know what to say to that.

Q: How about you, Nico? You’ve tended to finish exactly where you started all season, with a couple of exceptions. You wouldn’t want that.

NR: No, I hope none of those things apply.

LH: You know it’s really hard to pinpoint your favourite track in your career really because there are so many different ones. They all have such different characteristics but I honestly just really enjoy driving this track. I think it’s the combination – as I said earlier – with the tyres and the surface. It’s quite bumpy, the way the corners are, on camber, off camber and the way that the track just flows. It’s so much fun. Monaco’s fun but I don’t know, I think that including the city with all the great architecture and that, I think it might be potentially just edging out Monaco. Maybe.

Q: Dan Knutson – Auto Action and Speedsport Magazines) Seb, how worried are you about the Red Bulls and do you think that it’s just this track or have they actually made a step closer to you?

SV: Well, I think they have made a step closer to – ultimately – Mercedes, if you consider them being at the front so if you look at the gap they had, I think some races ago, and the gap they have now,  they are a lot closer. I think it was fairly evident at Silverstone already so it was expected that they have a strong weekend here as well. So I expect them to be strong tomorrow, but we managed to outqualify them which means that we are quicker. Obviously yesterday we cannot really compare because for us it was not a good day. Hopefully we can get a good comparison in tomorrow’s race and come out on top.

Q: (Peter Farkas – Auto Motor) Nico, I think we have heard you talking on the radio about something going wrong with the aero balance and you had so much understeer and maybe the tyre pressures were wrong. Did your car behave differently than in P3? So what might have been the problem?

NR: I generally just wasn’t happy and I don’t understand it so we need to look into it. It was a bit just inconsistent so difficult to explain. I don’t know. But I wasn’t happy with the general way qualifying went.