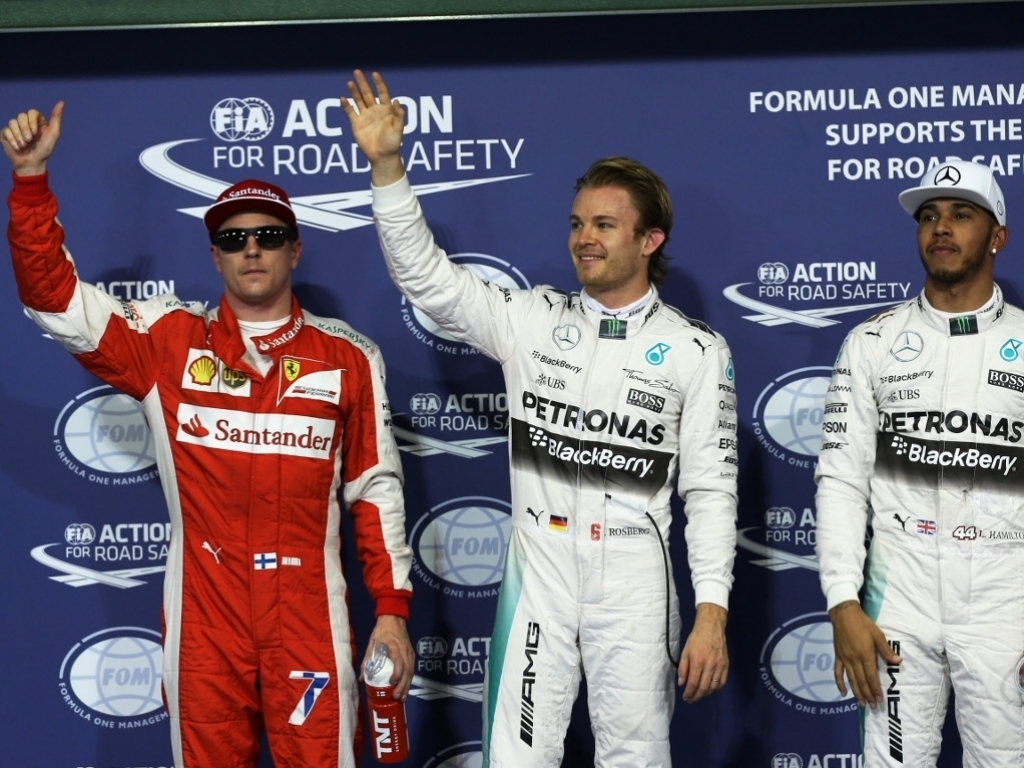 Nico, six poles in a row at the end of the season – how have you done it?

Nico ROSBERG: Well, before it was close in the other direction and now its close in this direction. I’m quicker in the moment. I’m very pleased about that and enjoying the moment and happy to be in pole again.

Lewis, coming to you, obviously very string all weekend, strong in Q1, strong in Q2 but then in Q3 it sort of slipped away. Was there a reason for that in particular?

Lewis HAMILTON: Not really, I’ve generally been struggling with the car a bit all weekend. But we’ve been working really hard to make some changes; we’ve had to take something off the car but no, Nico was just really quick today and he did a great job in Q3.

OK, coming to you Kimi, close battle obviously with the Force India of Sergio Perez for the third place on the grid. You’ll start alongside him in the grand prix tomorrow. Your final lap, though, was the one that did it. You’ve been quick all weekend but did you feel the pressure from Perez and what was the secret in the end, particularly with your team-mate down in 16th?

Kimi RÄIKKÖNEN: No real secret. Obviously the car has been handling pretty well all weekend. The laps haven’t been ideal many times. Even the first run, it was OK the lap, but nothing like… I knew there was quite a lot of room to improve so I just tried to make one a bit better lap and it was enough. Obviously still a bit of a way off from what these guys can do but we did our best today.

Coming back to you Nico, a disappointing race last here in Abu Dhabi. The race tomorrow, though, a chance to end the season with a hat-trick of victories. How important is it to carry that kind of momentum into the winter.

NR: Primarily I would just like to win the race, because it’s a great feeling to win and it would also give my whole crew and the team a great end to the season and a good reason to party then tomorrow night. That would be awesome, to all have a good time together. So that’s primarily on my mind. Of course, though, whatever we learn this year as well helps going into next year, so it would be great finishing on a high.

Nico, once again strategy starting to come into play during Saturday afternoon, noticeably that you saved new soft tyres for the race tomorrow, going out on supersofts in Q1. We’ve seen that a few times from your team, so fairly clear what you’re thinking about, but how important do you think strategy will be tomorrow in terms of the outcome of the grand prix?

NR: Strategy is always important. I think we’ve done our homework really well here, practicing well on Friday for the race, so we pretty much know exactly what to expect and the soft tyre will definitely be the better race tyre, so that’s why we saved one of those for the race.

Lewis, coming to you, obviously you’ve been fairly relaxed about the situation at the end of this season in terms of qualifying and the pendulum as it has swung. Over the balance of the year then it’s 12-7 to you in qualifying in the battle with Nico. Maybe you could just give us your thoughts on the Saturday, how the year has gone for you and your thoughts on that over the course of the season?

LH: It’s been good. It doesn’t really matter what that number is at the end of the day, what matters is the wins and obviously the championship, but you know, I’m happy because it has obviously been more in my favour. I’ve enjoyed it and in the last six Nico has done a great job. Areas to improve with the car, for me, on my side, but I’m sure we’ll get there.

Q: And for you Kimi, this is your fourth top three qualifying of the season. Do you feel going into 2016, with all you’ve said this weekend about hopes and aspirations for next year, that qualifying in particular is an area to work on?

KR: I don’t think it’s going to be as simple as that and if you qualify well you’re going to have a good finish. We have had good speed but many times a problem or mistakes here and there. Obviously it makes qualifying more difficult and hurts your end result easily but today, this weekend, everything’s been running smoothly and obviously it’s a bit better starting grid tomorrow but we have to still make a good race out of it. It doesn’t change what we do this year for next year anything. We start from zero in January and try to do a good year next.

Q: (Heikki Kulta – Turun Samomat) Nico, how tempting is it to try to get your seventh successive pole in the beginning of next season as Lewis did this year and to charge yourself for the whole winter.

NR: With all the respect, that’s not really a target of mine. Of course it’s great to finish the season on a high now and then yeah, I’ll be motivated to start next year in a way that this year has finished. That would be great. Unfortunately it’s not as simple as that but, as always, I’ll push and try and begin strongly next year.

Q: (Agris Lauzinieks – Kapitals Latvia) The question is what is the secret of your revival this season Nico? I mean two last races. Perhaps Mercedes is experimenting with new parts meant for 2016 and they are more suitable for your driving style. I mean new parts of the car.

NR: It’s not a revival, I haven’t reinvented anything. It’s just progress and that’s it. Before it was always very, very close but Lewis had that one-tenth edge and at the moment it’s me that has the one-tenth edge. Today a bit more but it was very close lately in the last two races. That’s it. At the moment I’m just quicker.

Q: (Dan Knutson – Honorary) Lewis, you said you’ve been struggling with the car all weekend. What has been the problem and will it be worse in the race?

LH: Generally it gets a little bit better in the race but it’s been for a while now. Generally just struggling on the edge with the car. It was a lot more comfortable at the beginning of the year for me and as I said, coming into this weekend I tried to make some changes. It disadvantaged myself a little bit maybe with one of the things I took off the car which was of benefit. I tried to get around it but at the end of the day it wasn’t good enough.

Q: (Heikki Kulta – Turun Samomat) Kimi, you seem to be quicker with the soft tyre in the practice. Does that mean the race is easier for you compared to qualifying.

KR: I don’t think it’s going to be any easier. I mean, in qualifying the supersofts were working well and obviously yesterday and this morning wasn’t ideal. Couldn’t get the lap with those. Couldn’t get the lap with those but again in qualifying they were fine. Obviously conditions changed from daytime to this evening but no, both tyres seem to be working pretty well for me and we’ll see what we’re going to do tomorrow – which one we’re going to run and how it’s going to plan out in the first few laps.