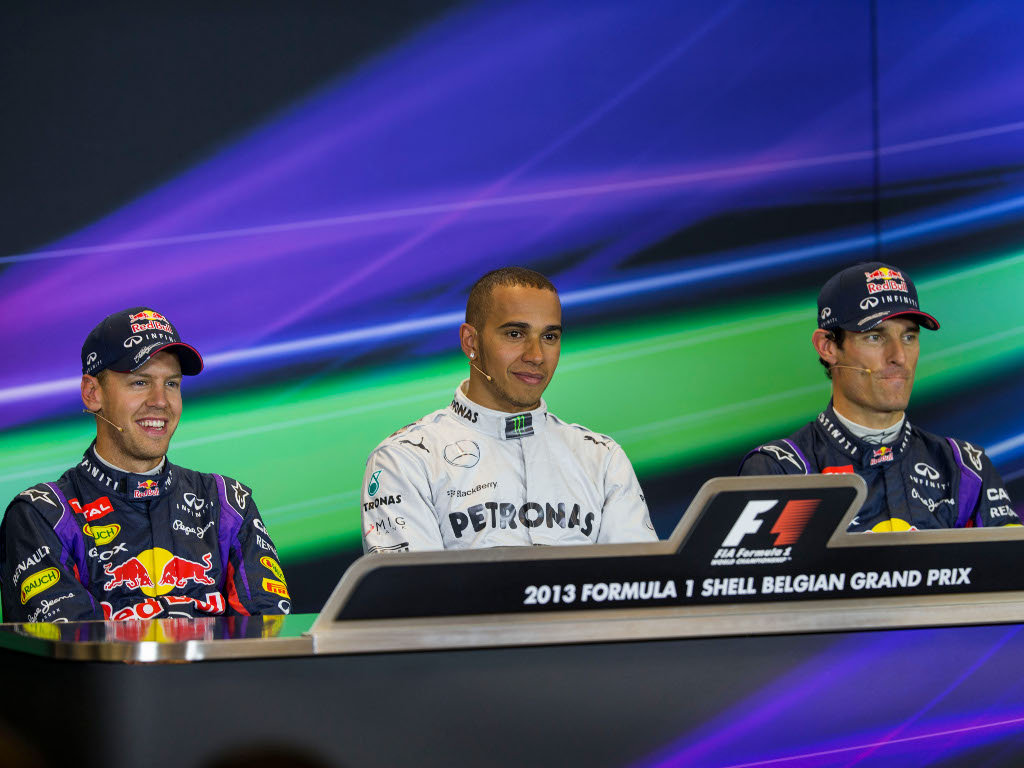 Q: Lewis, second race in a row now that in the closing stages of a Saturday afternoon you’ve spoiled Sebastian’s day. It’s becoming a bit of a habit and you two are having quite a duel at the moment.

LH: I’m trying to catch him up. He’s obviously had incredible success over the last few years so I’m trying my best to battle with hum and I hope that we can do that in the race tomorrow whatever the conditions are. I just feel grateful for the way the year has turned out and that we can be so competitive and really try to challenge the Red Bulls. It’s a huge accomplishment by the team.

Q: Tell us about communication on a day like this. You were saying just a moment ago that you weren’t really quite sure what was going in the first part of the lap, obviously the times were all over the place, but in terms of the way the team communicates. We saw people making mistakes in Q1 and Q2, very easy to make mistakes and communication clearly critical to that.

LH: Yeah, everyone is on edge and communication is key for all the teams. So they’re asking me what the track is like at certain points of the circuit and of course they need to be on it to make sure we get out at the right time. We nearly go pushed out of Q2, which I really wouldn’t have been happy with.

Q: Two one-hundredths of a second.

LH: Yeah, by the grace of God we got through. And then at the end, I didn’t know that I was going to be one of the last ones across the line. I just kept pushing and at the end of the day it was a good job by the team, particularly when the moment counted.

Q: Sebastian, as we were saying, Lewis and Mercedes coming on strong at the moment.

SV: Yeah, surely. Obviously in qualifying they have been quite strong in the first part of the season and they keep doing it. I think today you have to look from a different point of view. In these conditions anything can happen. Lewis had quite and impressive middle sector. He was right behind me. Maybe it helped a little bit to know how fast he could go here and there. I checked in my mirrors and thought I could have gone quicker here, quicker there because he was closing up. But I’m very happy with the result. As I said, in these conditions anything is possible. Mark touched on it – it’s very easy to do the wrong calls and you’re out. So, overall, a good result and everything is possible tomorrow, condition-wise we expect the same as today.

Q: You obviously looked very comfortable yesterday, apart from the puncture obviously in practice two and again this morning, the Red Bull looked well balanced, quick on the circuit. There was a sign in Q2 when you just waited and went out and did that one run that there seemed to be quite a lot of confidence as far as you were concerned about the session.

SV: Yeah, well confidence in the weather let’s say, mostly. It was supposed not to rain. I said OK there’s no point in going out, let’s wait, because the circuit will improve, which is what we did in the end. My first lap was not fantastic so I did another lap. I think we did the right thing there. Fortunately it didn’t rain. Obviously when it starts raining and you haven’t gone out you look really stupid. I think we trust the guys on the pit wall to judge the weather and the situation. Obviously, Q3 was different. The boys were quite in a hurry when we came back in to change tyres and go back out. But for Q2 I think it was the right call.

Q: Mark, we mentioned before that this is your last run in F1 quali at Spa-Francorchamps. Tell us about your relationship with this circuit, what you feel today and what you feel about this place.

MW: It’s a sensational circuit. Compared to the ones that have been attempted to be designed of late obviously they’re nothing like this track. It’s a beautiful circuit to drive on, all the guys love coming here, the teams, the engineers. Even the cars I think in a bizarre way know they’re here in terms of Eau Rouge and Blanchimont. You know, La Source is very tight and then 10 seconds later you’re through Eau Rouge so it’s a great mixture. I won the Formulas Ford race here in 1996 so it’s a beautiful circuit to drive on in any category and yeah, looking forward to bringing the Porsche here next year.