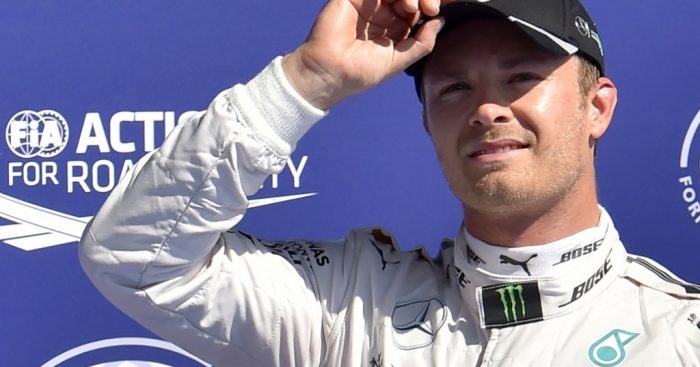 Nico Rosberg, Max Verstappen and Kimi Raikkonen were the drivers present for the post-qualifying press conference in Belgium.

Nico, many congratulations. Was that session as smooth on the inside as it looked from where we were sitting?

Nico ROSBERG: No, we had a difficult weekend up to now, especially this morning. We were seriously off the pace on one lap, so it really wasn’t so easy coming into qualifying. But we got the job done in the end. We really made quite a few changes on the car coming into qualifying and we found the right way. It all came together and it was feeling good, so I’m very pleased about that one.

Congratulations. Max, coming on to you, this is you first ever front-row start and you become the youngest every driver to start on the front row of the grid for a grand prix. Just 0.1s behind Nico, do you think pole position was on today?

Max VERSTAPPEN: Yeah, I mean, you can always do a better job. But also I think also Nico could have done a better lap; it’s always when you put everything together. But I think in the end to be so close to them on a track with some long straights, we can be very pleased with that. The whole weekend has been very smooth, even though I had some little issues this morning. From there on the mechanics did a great job and in qualifying the car was working really well, as you could see in sector two. I’m just very pleased to be second here in front of my fans, it’s just a great motivation when you see them next to the track.

Congratulations to you. Kimi, how is the car performing this morning, it looked like there were some nervous moments in Q2 when you went back out for a second run?

Kimi RÄIKKÖNEN: No, it was our plan. There wasn’t really anything odd going on. Obviously in the last qualifying I ran wide in the first try and that wasn’t ideal. But the second run was pretty good, but comparing to my Q2 lap I lost a few tenths in the last chicane, so obviously the pole position was there, so it was a bit disappointing because obviously once we are close by there it would have been nice to get it. But tomorrow is the race and I think if we compare it to the previous few races we have to be satisfied with where we are after qualifying.

Thank you Kimi. Coming back to you Nico: you’re on pole, your main championship rival will be starting from the back tomorrow, just give us your thoughts going into the race?

Nico, you said a moment ago that you had a few set-up problems yesterday. Can you elaborate on what they were and what you did to resolve them?

NR: We just weren’t quick, because it’s very, very hot out there and because the Pirelli pressures are very, very high for this weekend and so it was just a bit of a different world out there and we really had to change a lot of things and adapt but great to see how we managed to turn it around and get there eventually, just in time for qualifying, because even just this morning in FP3 we were quite a bit off the pace still.

Thanks Nico. Max, coming to you, what does it mean to you to break this 55-year record that had belonged to Ricardo Rodriguez, to be the youngest driver to get a front-row start?

MV: To be honest, not that much. I’m just very happy to be on the front row in Spa in front of all my fans. I mean, it’s great to break a record but I want to break other records.

Thank you Max. Kimi, just your thoughts, a few more thoughts please going into tomorrow’s race, because you have opted for more supersoft tyres than any of the other front-running teams, do you think that will compromise you?

KR: No, it shouldn’t. You never know what will happen tomorrow, but ideally we should be just fine. Tomorrow will tell but obviously it’s probably more tricky than anyone expected, because the conditions are not exactly normal Spa conditions. It’s a bit tricky with the tyres, but it’s the same for everybody and I think what we have is enough for what we want to do, so it should be fine.

Q: (Louis Dekker – NOS.NL) For Max, how frustrating was it this morning knowing that there’s tens of thousands of Dutch people and not be able to drive?

MV: I think it was even more frustrating for myself knowing that I couldn’t get the laps in. Of course it’s great to drive in front of your fans, to show yourself – but I couldn’t get my references in for qualifying. But luckily it was not a big issue and we solved it in time. From there on it was just a very good qualifying.

Max, do you think you could have found more pace in qualifying, had you been able to run this morning?

MV: That’s always very difficult to say. I think it just gives you a better reference straight away. On the other hand, we should be on our limits quite easily and I think after one run in qualifying it was there again. So maybe, maybe not.

Q: (Oana Popoiou – F1 Zone) A question for Kimi. Ferrari seems to be back to a better shape this weekend, can you tell us what is different from the previous races?

KR: I have to say, like I said earlier, it’s nice to be so close but obviously we’d rather be on pole position. I thought we had a good chance. I lost some time in the last chicane but… these conditions, it’s very hot, it’s tricky with the tyres for everybody… I don’t know. If we would know, it would be much easier to be at least in this position always. It has changed quite a few times this year, depending on circuits and conditions, so… who knows?

Q: (Livio Oricchio – GloboEsporte.com) To Max. You start on supersoft tyres and your team-mate with soft tyres. We knew this weekend the supersoft does not permit too many laps. What is the strategy exactly you are planning?

MV: To start on the supersoft and then see where we end up after a few laps. We have some different strategies out there but I think at the end of the day, yeah, I have to box a bit earlier – but after this there are a lot of laps to go and we’ll see what happens.

Q: (Michael Schmidt – Auto Motor und Sport) Max, why in the first place did you not try it on soft in Q2? Didn’t you have trust to do it?

MV: Because I decided, together with the team, that I wanted to run the supersoft. I think that’s the best strategy to go into tomorrow – but we’ll see how it pays off.

Q: (Heikki Kulta – Turun Sanomat) Kimi, how crucial is the first stint of the race for the result? There seems to be different kinds of compounds for the top drivers.

KR: Obviously the start and the first laps is very important in every race. I don’t think it will decide what happens for the whole race. It will be quite a tricky race for everybody with the tyres and with the conditions. It’s not going to be very easy but hopefully we make the right choices when it comes and get the best out of it – but for sure it’s not going to be very easy.

Q: (Dan Knutson – Speed Sport / Auto Action) Following up on what Kimi was talking about, for Nico and Kimi, how do you see the start playing out? Very short run down to the beginning but the guy behind you has very sticky tyres.

NR: I’m feeling good about it. Starting first. Usually you can manage to keep first position all the way up the hill but yeah, of course, need to get a good run through Eau Rouge but it will be OK.

KR: I don’t think there is an awful lot of different on the start between the tyres. Theirs is maybe a little bit better with the supersoft but as long as we do a proper start it should be fine.

Q: (Mike Doodson – Auto Action) We all know about Eau Rouge and how exciting it is but also that circumstances change each year. Which is the hairiest corner on the circuit for you all this year?

NR: The hairiest is maybe turn 10, turn 10 is pretty challenging because if you run a little bit further out and you get onto the Astroturf it can flick you off into the tyre barrier so that’s one of the toughest ones.

KR: Every corner can go wrong but Eau Rouge has been less of a challenge for some years but I think in the race it might become a bit more tricky again. Overall, I think there are a lot of nice places – corners – here.

Q: (Walter Koster – Saarbrucken Zeitung) Nico, pole number 28, do you regret that your teammate has not fought with you and therefore is this pole less important? I know, pole is pole.

NR: I’m very happy because it was a battle out there, everybody behind was very very close and I managed to get the lap and get the pole so I’m definitely very pleased with that one. That’s it.

Q: (Louis Dekker – NOS.NL) Kimi and Max; Kimi, you’re again just behind Max Verstappen. It seems like you spend a lot of time this year looking at his back. Do you know how to overtake?

KR: Who knows in the first corner but it’s a normal race and we will see what happens? Try and make a good start and go from there.

Q: (Michael Schmidt – Auto Motor und Sport) Kimi, in the first outing in Q3 you had been on the gravel I think in turn 14; did that compromise your last run in terms of taking risks?

KR: Not really, obviously it would have more easy if I hadn’t run out. The lap was also very good, the first one but really in the last chicane I got a bit of understeer and lost a couple of tenths compared to my Q2 lap. For sure we had a chance to put it on pole and I guess it would have been more easy not going off in the first run and having a decent lap there but that’s how it is.

Q: (Livio Oricchio – GloboEsporte.com) Nico, it looks like Red Bull and Ferrari are closer on this track. Do you have this impression? Do you think during the 44 laps, considering the tyre question in this Grand Prix, they can even challenge Mercedes more?

NR: Definitely, it’s a very different situation out there with the temperature and the tyre pressures that we have and they are very close, yeah, and so tomorrow it’s going to be a very very demanding race against both of them. I think the best long run for now is from Red Bull on Friday. I think.

Q: (Barna Zsoldis – Nemzeti Sport) Nico, starting from pole in Germany and Hungary as well, you lost the first position quite early. Any negative thoughts or feelings because of that?

NR: It’s even shorter to turn one here so that’s a very good thing.