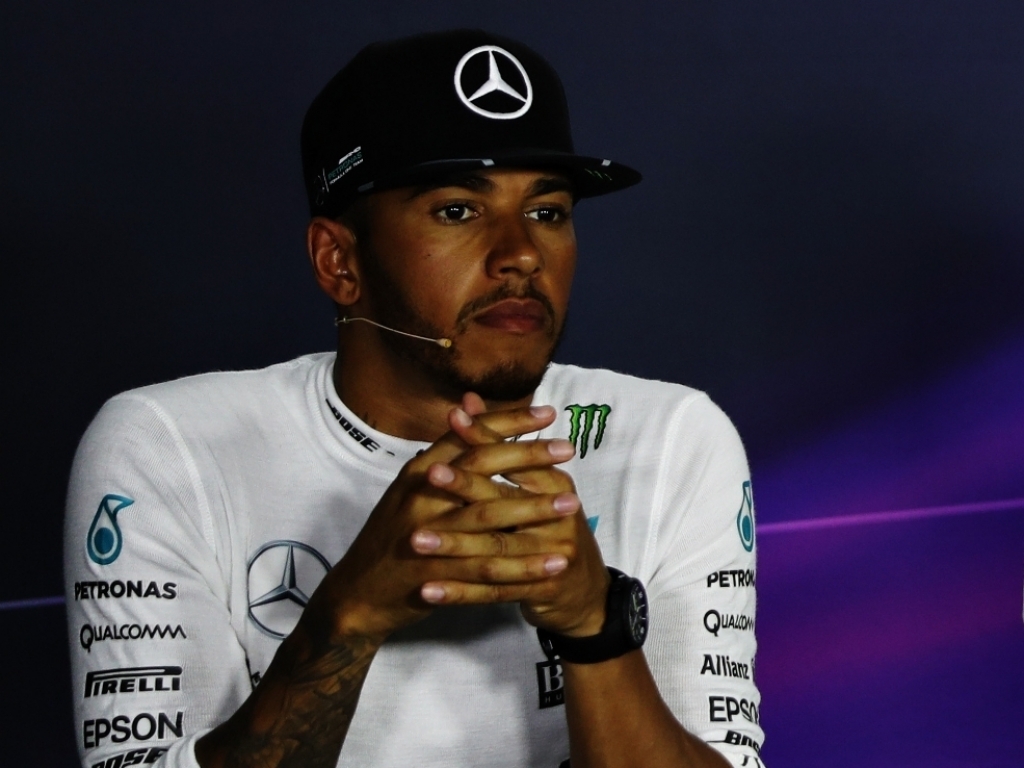 Q: Lewis, it looked like you had it all hooked up perfectly today for your first pole here at the Circuit of the Americas, the fastest ever lap of this track you set today, how are you feeling?

Lewis HAMILTON: I feel amazing. It’s my first pole here, so it’s been many years of trying and a lot of great people have been trying to help me get that, so I’m very, very happy with today. I want to say a big thank you to all the crowd. I could hear the crowd cheering when I came across the line. The energy on that slow down lap from everyone was much, much appreciated. So I thank everyone for coming out today and I hope that tomorrow we can all provide them with a great race.

Q: Well, you were with a James Bond baddie this morning and you were radioing in that you had a problem with shifts into seventh gear in that final qualifying run. Di you think that he had been at work there?

LH: No, he’s a goodie this weekend.

Any problems, though, with that?

LH: They said there are no problems, no. I think it might have been the way I was doing it, so fingers crossed for tomorrow.

Nico ROSBERG: No, it was nothing specific. Sector one… I preferred sector two and three today and that’s it. Lewis was just quicker in sector one, pretty simple, but it was a good lap that I did nevertheless in the end there, so I was pleased with. Of course annoyed when Lewis came over the line and I could see on the TV that he beat me to it, but that’s the way it goes sometimes. Nevertheless, as we’ve seen this year, qualifying isn’t all-important, so from P2 I still have a great chance tomorrow.

Q: Coming to you Daniel, perhaps not quite as close as you and Red Bull had hoped in terms of outright pace to the Mercedes at the end of the day. But tell us about your strategy – because you, unlike these two gentlemen, are going to start the race tomorrow on the supersoft, your team-mate Max Verstappen is going to start on the soft which looks possibly the better strategy. Are you a little concerned, despite qualifying up here in third place?

Daniel RICCIARDO: Not concerned. We expected it to go like this and yeah, we both… Max was wanting to try the soft and I was happy to go on the supersoft. I was a bit more, probably comfortable on that tyre yesterday in the long run so that was the reason for that. Hopefully it gives me a little bit of a better launch of the line as well. So, we’ll see. I think the day was pretty good. Not really close to Mercedes but I think we expected them to be very hard to beat – but we’ve got a good buffer over Ferrari and I think the car was working pretty well. I think we’ve got a good chance tomorrow so, see what we can do.

Q: So it’s an all-out attack strategy off the line, it it?

DR: Yeah! We’ll see what happens but hopefully the supersoft gives me a little bit of friendly grip off the line.

Q: What about that then Lewis? A bit of friendly grip off the line from the second row of the grid. Obviously tactics are going to play a big part, you’ve won this race three times here: how are you feeling going into this grand prix and also, from a championship point of view, there’s still all to play for, right?

LH: Of course. No, I feel positive. We’ve worked hard over the last couple of weeks; understanding and improving on lots of areas. It’s a great feeling to be back up here. It’s been a while since I’ve sat in this spot so I very much appreciate it and I’ll prepare the best I can for tomorrow. Got some incredible support through some friends that are here and family and the crowd, so yeah, been practicing the starts all weekend so I feel positive about it for tomorrow.

Q: Lewis, obviously we mentioned earlier on about being hooked up but that opening sequence of corners, those fast ones in sector one, getting into that right rhythm , getting into that groove, setting you on your way for a lap. Just tell us about that feeling, knowing that you’ve absolutely nailed it when you’re in that sequence?

LH: Well, it really starts from turn one. It’s probably difficult for people to understand how awesome a track it is because it’s very very technical in terms of braking, positioning, turning points. It’s a very particular circuit. Turn one, for example, is not easy to get right. And then after that, when you come into the esses, positioning is everything and it’s quite bumpy. If you see on my lap I had a big oversteer moment at one point. Positioning is everything and having a good front end and the rear to be able to follow is tough but placing the car in the right place through the whole bunch of those sectors where the tyres are going over the… overheating is crucial. That first sector was my best of the weekend. In all honesty, the poles that I’ve lost in the past years have all been in the first corner, mostly, so to finally come here and have a turn one in the first sector, the fastest, just shows progression which I’m really happy about.

Q: Nico, one of the real decisive things here is always the start, it has been all season, particularly with you guys, but this is a very particular start, isn’t it, uphill to that turn one? How do you feel about it, how do you approach it? It usually gets quite tight in there, doesn’t it?

NR: Yeah, for sure it’s a difficult one. We’ve seen many people messing up their starts in recent years, also because from practice where you’re starting at the end of the pit lane and it goes straight up hill, whereas with the real start you’re still on the flatter part where it’s very different. So it will be interesting tomorrow, for sure.

Q: Daniel, you’ve had at least one Mercedes behind you at the finish in four of the last six Grands Prix but nevertheless all four US Grands Prix here so far here in COTA have been won from the front row of the grid, so that’s something you’re going to have to overturn. You’ve obviously got some tricks up your sleeve, but how are you feeling about this Grand Prix tomorrow? Your race pace on Friday looked like you could give these guys a run for their money; if you can get in front of them maybe you could stay there?

DR: Yeah, that’s obviously the plan. We will see how tomorrow plays out. The track conditions changed quite a bit today so I think we’re going to have similar conditions tomorrow as we did today so that could have a bit of influence. We did look good yesterday. I’m the only one, I think, on the first two rows that starts on the supersoft. Sure that tyre probably won’t last as long but it might give me a bit of an advantage at the start so we will see how it plays out and have some fun. It is a good circuit round here and you can do overtaking and there’s a few corners where you can change your line and do a few little things so it’s not just a one line circuit, there’s some experiments that you can go for so we’ll see what happens. I’m looking forward to tomorrow.

Q: (Livio Oricchio – Globo Esporte.com) Nico, four second positions in the next four races are enough – is that too boring for you?

NR: I have heard this one before.

Q: (Livio Oricchio – Globo Esporte.come) Will you consider that at the start, at the first bend, during the race and also, for you and Lewis, in the last free practice this morning you put the supersofts on in the last last moment. Was it part of the strategy, not to show the Red Bulls the real potential of the car on this track?

NR: So for me, I’m not thinking about all those things, I just want to try and win the race tomorrow. It would be amazing to win the US Grand Prix and that’s all I’m going to try to do. So full attack on that, fully focused on that. And then this morning, well, that wasn’t a strategy to hide our speed. It was just that everything got a bit late with the red flag.

LH: It was just the session didn’t go as planned with the red flag.

Q: (Seff Harding – Zero Zone News) Lewis, you are seven poles away from catching your hero Ayrton Senna, how does it feel to be so close to your idol?

LH: I had kind of forgotten about it to be honest. Seven is still a long way to go but to think that I’m within shooting distance is incredible, but it also just goes to show just how amazing a driver he was. To get as many poles as that in the amount of time that he had, it’s taken me a lot longer to get where I am so it was clearly phenomenal.