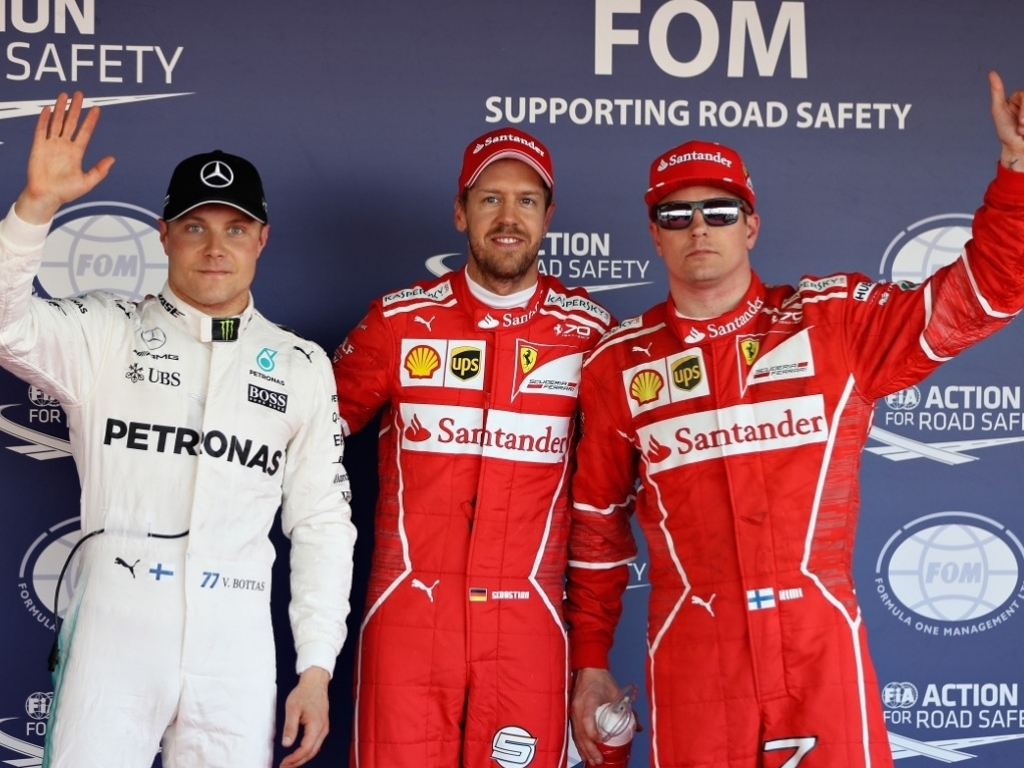 Q: Sebastian, it was an incredibly tight battle at the front and a last-minute, do-or-die effort from you seemed to make the difference. Talk us through the session.

Sebastian VETTEL: Yeah, I had a good start to the session, to qualifying this afternoon. I was feeling reasonably comfortable. But then I think in Q2 I lost a little bit the rhythm, so, my final run in Q2 which I thought would just give me enough of an idea for Q3 for the final segment, would put me in place, and it went wrong. I locked up, lost a bit the rhythm and then in Q3 the first run was not really tidy so I left it to the end and, yeah, got a good lap it. It proved I think in the last sector, I think I made up some time compared to my lap before. I knew it would be tight and I knew I would be the first one across the line and by going quicker than what I saw on the screen before than Kimi I knew, for now, I’m ahead, but then I immediately and asked about everybody else, “tell me about the others”. My race engineer Ricardo told me “they are closing the lap, they are closing the lap”. I said: “yeah, let me know, let me know, how are the sectors, how are the split times?” The first one I got was Valtteri who didn’t manage to improve and then when I got the message that we got it, I was over the moon. So yeah, a big thank you to the team, I think the car was phenomenal this afternoon. It’s really a pleasure to take a seat and go around with low fuel and just try and push it to the limit. If you have a rhythm here it feels fantastic, so glad I got it back and big thanks to the team. It’s a team effort and it’s a great result to have both cars on the front row. But it’s only part of the job, the main job is obviously tomorrow but for now it’s an important step. We managed to improve a little bit. Maybe the circuit came our way as well but it’s a very good result and I’m sure everybody is very happy and very proud so we’ll enjoy that but in a couple of hours we’ll start focusing on the race

Q: Many congratulations. Coming to you Kimi, your second place gives Ferrari it’s first front row lock-out since the French Grand Prix in 2008. You were so close to Sebastian. How frustrated are you to be on pole?

Kimi RÄIKKÖNEN: Obviously the aim is to be on the front. The feeling has been more better this weekend and now we just got some traffic on the pout lap on the last set and couldn’t really make the tyres work as well as the first run and it was a bit more tricky. It was thereabouts and then I just got it back in the last corner but it didn’t pay off. I’m happier than previous qualifyings but obviously I think we had all the tools to be in the front today but a one-two for the team is not bad.

Q:Thank you Kimi. Valtteri, this is the first time this year that a Mercedes hasn’t started from pole position. Quite simply, how good is the Mercedes relative to the Ferrari here in Russia?

Valtteri BOTTAS: Well, I think we can clearly see from the result that Ferrari was quicker today. We were close in the end but not quite enough. To be honest all weekend they have had the upper hand and they have been able to extract much mire, especially from the ultrasoft tyre, and that’s where we really struggled yesterday. We made improvements for today but obviously not quite enough. Still, good team effort to get very close and we’re on the second row. As always, tomorrow is the day that really counts and I think a second-row start is that much of a bad thing – it’s a pretty long run into Turn One.

Q: Thanks. Coming back to you Sebastian: is Ferrari back?

SV: From where? I think if you look at the first three races then I think we had a good start to the season. Obviously in qualifying Mercedes has been very, very strong. As I touched on, maybe the track, maybe how we handled the tyres, I don’t know. It doesn’t matter in the end; we are in front which is a good thing. As I said, it’s a great achievement. We managed to improve the car a little bit for this race. It will be very close tomorrow, especially over a long run. Valtteri had good pace yesterday. We’ll see. But as I said, for now we’re full of joy. We’re very happy that we’re back – at least if you talk about the front row for Saturday and obviously we’ll try and take the momentum into the race tomorrow.

Q: Sebastian, how important is it to have your team-mate alongside you on the front row tomorrow?

SV: Well, if I could choose I would put Kimi alongside and I think he would say the same. But I think for the team it’s a great day today. Mercedes has been very, very dominant the last years in qualifying, so it’s good to get there, get closer. It was again very close with Valtteri. I don’t know his last lap but the Q2 lap and his first lap in Q3 was very, very strong. I think it’s been a mega qualifying. The car was really nice to drive and it’s a track when the car comes alive it’s really pleasant.

Q: Are you surprised to be on pole?

SV: Yes and no. I was eyeing… you are always eyeing for pole when you go into qualifying. I think I was eyeing also the last couple of events but I had to learn harshly that in Q3 we weren’t quite ready, so today I don’t think I ever looked at it and said: “OK, today we can do it.” I knew that we can do well, and I knew the car was good, but I didn’t know what they might be able to find for the last part of qualifying, so yeah, to sum it up I knew we were strong, I knew we can do it, but I didn’t know how strong in relation to them.

Q: Kimi, different strategies for Ferrari and Mercedes during that session, you guys going out on the supersoft tyres at the start of Q1. Just talk us through how the whole qualifying session played out.

KR: It played out as we planned it. We did what we planned to do and obviously the end result turned out to be pretty OK for the team. We’ve seen often people run different tyres in the first qualifying. Doesn’t really matter which tyres you run most of the time. That’s what we chose to do and then just go from there.

Q: How’s the race pace of the Ferrari?

KR: I think it was good yesterday but obviously tomorrow is the race and we have to see. I’m sure it’s going to be a close fight and we have to make a good job out of it, so let’s see.

Q: Valtteri, coming to you, are you surprised by the pace of the Ferrari this weekend?

VB: I think definitely, yeah. Me personally and as a team, coming into this weekend probably we were thinking, y’know, it’s going to be better than Bahrain but so far it’s turned out to be not so good and Ferrari seems to be doing something better. For sure it’s disappointing for us to be… not to be on the pole. I mean we did a good improvement from yesterday to today I think but it wasn’t quite enough and we definitely have some work to do but tomorrow is a different story. It’s going to be a long race and, again, difficult to predict but I think it’s going to be close.

Q: Is there one specific problem with the car or is it just simply that the Ferrari is faster?

VB: You know, I think before the qualifying, the only problems we really had was extracting the most out of the ultrasoft tyre. Like I said, I think we mad eit better but I don’t know if it’s because of the tyres or because of the car. For sure they have a very good car and we are struggling to compete with them but we can. It’s a long season ahead and tomorrow is another day, so we are going to do everything we can as a team to be in front of them.

Q: (Livio Oricchio – Globoesporte.com) To Sebastian and to Kimi, you already said about that in the Q2, in the first exit you didn’t get the maximum out of the car. From the outside we had the impression that both of you didn’t reach the limit, maybe thinking of the start of the race, using that tyre for the start of the race, not using the limit of the tyre, not going to the limit of the tyre. Is there any meaning in that?

SV: Not really. I think, yeah, obviously we evaluated two different things Q2, we did one run with only one lap and another run with two laps and I wanted to push the limit on the first one and on the second one, as I said, I was feeling quite well up to the point where I locked the front and went straight into Turn 13. So… yeah, the plan was to go full steam ahead and see how fast we can go. Also because Valtteri had put in a very strong lap already in Q2.

Kimi, anything to add?

Q: (Andrea Cremonesi – La Gazzetta dello Sport) I have a question for Sebastian and Kimi. Sebastian, do you feel that you are in the same condition you were in at Red Bull during their dominant era. Is Ferrari starting a new dominant era like Red Bull when you were there. And for Kimi, if you think this Ferrari seems very close to the Ferrari in that fantastic years 2007-2008.

KR: They’re all different cars. There’s no way that we can compare. It’s ten years ago so different rules, different tyres, different a lot of things. So, maybe we have a good package. Estimating how does it feel comparing to the old cars… doesn’t really matter how that plays out as long as we can be faster against the cars that we are racing now.