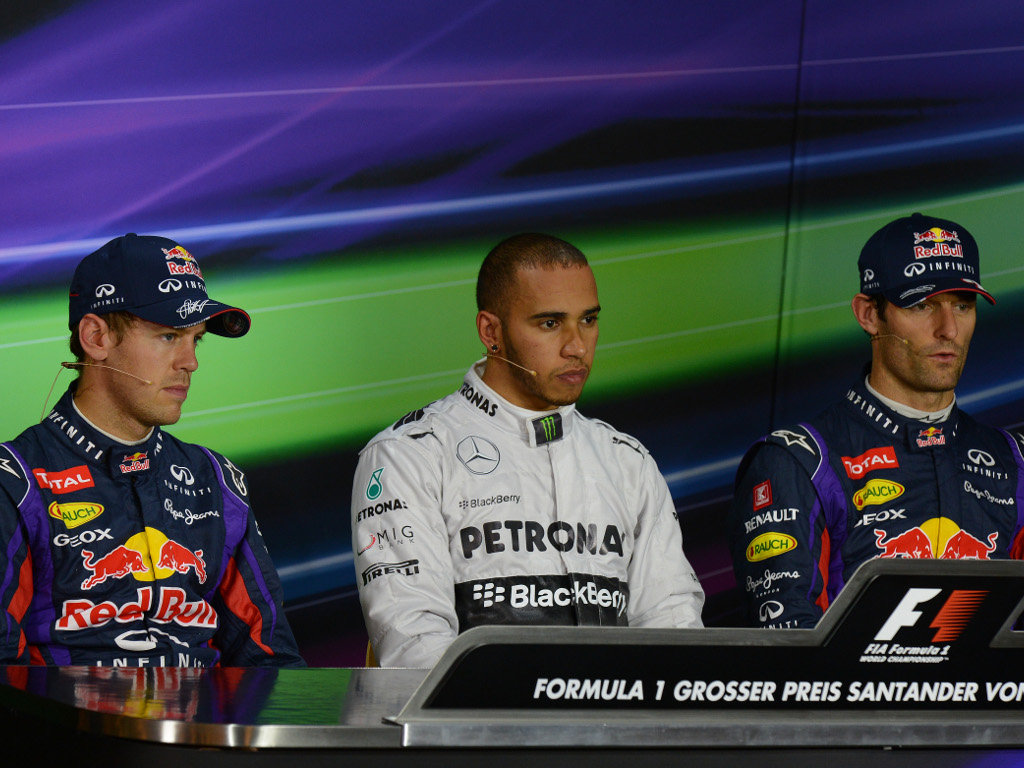 Q: Lewis, you have some problems with the setup of the car this morning – quite a turnaround. How does it feel to come through and take pole position from such a long way back?

Lewis HAMILTON: I tell you, it’s really overwhelming. I’ve been struggling since the first run in P1, which was pretty good, P2, P3 were just disasters and it got even worse this morning. We were miles off. I was a good eight-tenths of a second off. I wasn’t comfortable with the car at all. And we went back into the truck and we just worked hard, tried to analyse everything and made lots and lots of changes. I just hoped that it would work and fortunately the car was beneath me and I was able to put in the times we did. I’m grateful for the work the guys did with me and, again, this is just down to all the hard work the team has been putting in.

Q: Sebastian, you’ve never won on home soil. Tell us how much it means to you to do so tomorrow.

Sebastian VETTEL: Well, first of all I think we should talk about today. Congratulations to Lewis, he did a great job. I think it was quite close. I think I tried everything I had, the car felt fine. I think we were struggling a little bit this afternoon in the first sector, losing a little bit of time there and then trying to catch up. Unfortunately it wasn’t enough but it looks like we are much closer to them here than we were in Silverstone. So, I think we’ve made some progress and have all confidence for tomorrow. We had a good run yesterday, looking at the race. I think we did our homework and now obviously it’s up to us. We put the car in the first row. It wasn’t quite enough for pole position but we should have a good race from there. I’m looking forward to the race tomorrow.

Q: Mark, you’ve got a great record around this place. Pole positions and wins. Again very close but where did it get away from you today?

Mark WEBBER: I’m not sure. I’m actually happy to be where I am. It’s very, very sensitive out there as you can see. As Lewis touched on, the previous session he wasn’t comfortable and then he finds some form. Similar for us. I think we might have lost a little bit in the first sector, as Seb touched on, it’s very, very tricky for us to probably find the rhythm that we had there in P3 but that’s the way it is. We know there was a shift in track temp and maybe it’s pulled everyone together a little bit – at least on a short run. I think on long runs we’re very happy with the car. We’re in a good position to put pressure on for the victory tomorrow.

Q: Coming back to you Lewis, you’ve had a very long relationship, obviously, with Mercedes, going back to the very early days of your junior career. What does it mean to you today, to give them this pole position on home soil?

LH: Obviously it’s a privilege to drive for this team. You know they’ve got great history, this is where Mercedes really started and so I’ve feel proud to get the pole for them – but obviously there’s no points for today. Tomorrow’s the important day. These guys are very good on their long runs. I hope that with my new setup it will be as good and I hope we can give them a run for their money.

Q: Okay gentleman, let’s perhaps get into a little more detail about this afternoon’s qualifying session. Lewis, we saw your team-mate Nico Rosberg sitting in the garage at the end of Q2 when the fastest laps were being turned. Obviously, the track ramped up substantially during that Q2 session, showing again how fine the margins are between success and failure. Perhaps you can talk about the atmosphere, what was going on in the garage and your own thoughts at that point?

LH: Well, it was obviously a big surprise for all of us. Nico’s been quick all weekend and I anticipated that he would most likely out-qualify me today and be up there where we are right now. Obviously he was only two tenths off the pace compared to my lap and obviously the track did ramp up and that was a real surprise and that caught us out a bit.

Q: Okay, Sebastian, as Mark touched on earlier, it was a day of things moving around a lot and the margins were very fine and sometimes there were literally hundredths of a seconds between the three of you as things swung around. What, for you, were the crucial details today. Was it the wind, was it the track temperature going up so much? What was it for you?

SV: I think it’s a combination of all these aspects. I was very happy in FP3 this morning. I was very happy with the car, so we didn’t change much. And this afternoon, I was struggling to bring it together, especially in the first part of the track, as Mark touched on, it was quite windy, we had wind from the back and the track was a little bit warmed. Still, the car wasn’t bad; it wasn’t awful through the first sector. So I was pretty happy but the time didn’t come. And I tried to do the best I could in the next two sectors but it wasn’t enough to get Lewis today.

Q: Mark perhaps you shed a little bit of light on… this is a one-off tyre specification we’re going to be using this weekend – from Hungary onwards a completely new spec of tyres. What kind of race are you anticipating on this combination of tyres that have been brought here this weekend.

MW: I think the race tomorrow will be pretty aggressive. We got some good information on Friday as to how the tyres handle the conditions so I think it will be a pretty aggressive grand prix. Obviously Pirelli have made some changes from a safety perspective from the last grand prix, which was the right thing to do, otherwise we probably wouldn’t be racing, so that’s a good step from them. But also people have to understand… I think people get a little bit confused, that soft compounds don’t make tyres explode, it’s actually just the construction of the tyres, so when Pirelli are moving around some of their compound ranges it’s not for a safety factor, it’s actually just how the tyres are built. Going forward, as you said, they’re going to make some more adjustments and we need to work on those in the future, but for tomorrow I think that the tyres will be pretty good. But you never know. You never count your chickens these days. Come Sunday you can have a lot of surprises and as usual we’ll be legends tomorrow night on what we should have done better.

Q: Just for clarity, when you say aggressive you mean pushing flat out throughout the grand prix?

MW: Probably not that aggressive, you still need to keep a bit in margin but we’ll find out tomorrow, as I say.